You are using an outdated browser. Please upgrade your browser to improve your experience.
App-dicted
by Joe White
January 5, 2016

LastPass, the free password management application for Apple’s iOS, has release a major update bringing a number of interesting changes to the software.

Should the worst happen

Perhaps the biggest change made in LastPass 4.0 is the app’s Emergency Access feature, which aims to help users future-proof their password vault against their very own death. Online, the folks behind LastPass outlined the feature, explaining:

This loved one might be a spouse, parent, sibling, or child. As LastPass’s developer indeed notes, though, “should the worst happen, they’ll have what they need to manage accounts on your behalf.” With the Internet powering such a significant portion of our own lives, from rent bills to online banking, LastPass 4.0 aims to provide users with a bit more security and reassurance when it comes to managing your life online.

How is Emergency Access secure? When you set up Emergency Access, your vault is encrypted locally and then synced with LastPass. LastPass stores the encrypted data until it’s released after the waiting period you specify, and only the Emergency Access contact has the key to be able to decrypt and access your vault. It’s inaccessible to LastPass, and to other outside parties.

This isn’t all LastPass 4.0 brings: there’s also a new look and feel in the app, “featuring a more visual vault experience with big icons, simpler navigation, and bolder colors,” as well as a new Sharing Center for iOS device owners to access. This latter change makes it easier for LastPass users to share passwords with another user of the application.

You’ll see tabs for items that you’re sharing with others, for items that others are sharing with you, and for Shared Folders. In each tab, you can review who has access to which passwords or notes, share new items, or remove someone’s access at any time. Plus, you can check if someone’s received the password you shared with them, and remind them if they haven’t accepted it. 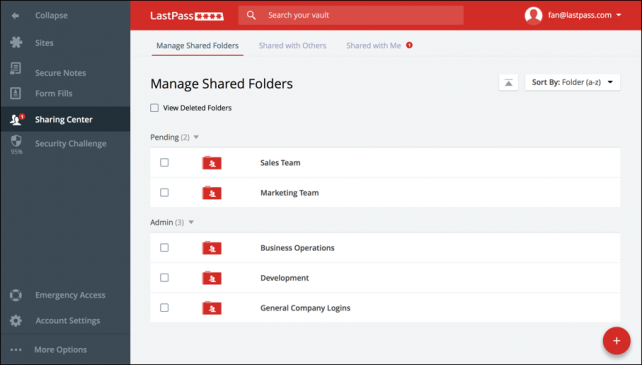 LastPass Premium or LastPass Enterprise users can also manage their Shared Folders from inside the same interface.

All in all, LastPass 4.0 means the password management software is indeed better than ever. You can download the updated application now on the App Store, and as before, it’s available free of charge for the iPhone/iPod touch and iPad.