You are using an outdated browser. Please upgrade your browser to improve your experience.
Accessories
by Joe White
January 22, 2016

The Apple Watch Hermès collection can now be purchased online, with prices starting at $1,100 for the smart watch plus a Hermès-designed leather band.

You can order a model in the collection from Hermes.com at the minute, and availability at Apple.com is expected to roll out later today. The Apple Watch Hermès collection so far consists of four models: the 38 and 42 mm Single Tour bands, the 38 mm Double Tour band, and the 42 mm Cuff band. Each one features a leather strap handmade by Hermès artisans in France. 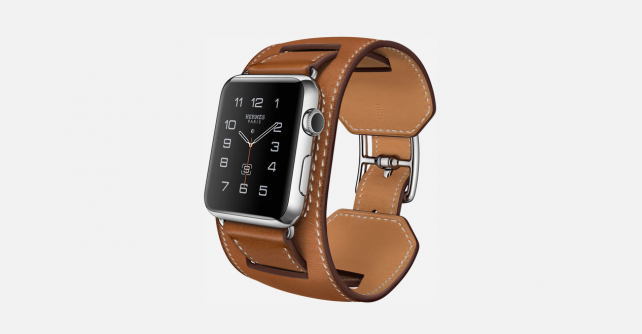 The Hermès Cuff for Apple Watch.

I really like the Hermès collection: surprisingly (for me), it’s grown on me since the relationship between Apple and the French company was first announced. At the minute, I’m using a Pad & Quill Lowry Cuff with my stainless steel Apple Watch (something I’ll be reviewing in the not-to-distant future), and this isn’t too dissimilar to Hermès’ own design. I think it compliments the body of the Apple Watch itself perfectly, and it’s comfortable to wear.

Of course, the Hermès collection carries a hefty price, with the $1,100 starting price around double the cost of a basic stainless steel Apple Watch, and almost three times the amount of the Apple Watch Sport. But you’re paying for the design and the name here, and I think this first collaboration has been a smart one for Apple to make.

Before now, the Hermès collection could only be purchased in select stores. And while Apple.com still (as of this writing) isn’t offering the collection, its availability at Hermes.com is great news for would-be customers. Check it out now.