You are using an outdated browser. Please upgrade your browser to improve your experience.
iPhotographer
by Jeff Byrnes
January 7, 2016

Earlier this morning, Jan. 7, an app called Vidyo appeared, allowing you to make screen recordings straight from your iPhone or iPad without needing to jailbreak your device or tether it to QuickTime. This was a welcome addition to the App Store, especially for those of us who write about iOS but also for anybody who might want to make a video of their workflow or game play. Just as quickly as it appeared, unfortunately, the software appears to have been pulled from the App Store.

Vidyo allowed you to record the screen of your iOS device by acting as if it was using AirPlay mirroring. Once configured, all you had to do was select Vidyo as an AirPlay source to start mirroring and, in fact, screen recording.

Vidyo also allowed you to capture video and audio from other media inputs, and even edit your video files. You could add background music or commentary to existing videos, and the app provided you with full control of mixing volumes.

It’s not surprising that the app has been pulled. It’s using AirPlay Mirroring for an unintended purpose, which is against what Apple wants developers to do. What’s more surprising is that the title made it through the App Store review process in the first place. 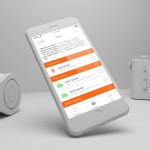 Updated: Vidyo for iOS offers screen recording capabilities
Nothing found :(
Try something else