You are using an outdated browser. Please upgrade your browser to improve your experience.
Pocket Gaming
by Brent Dirks
February 22, 2016

Players are finding out the hard way that Gameloft’s Order & Chaos Online is living up to its name. First reported by TouchArcade, numerous gamers have received access to a “test box” that’s more easily described as Pandora’s box.

Here’s more from the report.

What is the “test box?” Well, it appears to be a big piece of the toolkit that GM’s (or “Game Masters,” the online support people in an MMO) use to do things in games. It’s not a unique thing to Order & Chaos by any means, MMORPG history is full of surprisingly hodge podge ways that these games are held together, whether it’s through special items, secret commands, or other stuff that GM’s use to fix player problems and keep the game running like a well oiled machine. In the case of Order & Chaos, those functions seem to be done through this test box which contains what are supposed to be GM-only spells and other functions, which anyone who possesses the test box can use.

Here’s a video that shows how the “test box” is being used. Click here if you can’t see it.

With the box, gamers can do pretty much anything including create gold, infinite items, and even give the capability to other players.

It will definitely be interesting to see how Gameloft handles the problem. While the game itself is free, there are a number of in-app purchases available to players.

Just to note, the issue is confined to only the original game and not Order & Chaos 2: Redemption or Heroes of Order & Chaos.

For other recent app news and reviews, see: Skype Qik will head into the sunset late next month, Become a sword master and defeat your foes in The Swords, and Help Junior fight off the undead in Jr’s Mad Dash. 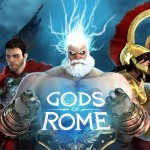 Gameloft unleashes Gods of Rome on iOS
Nothing found :(
Try something else