You are using an outdated browser. Please upgrade your browser to improve your experience.
Accessories
by Brent Dirks
February 16, 2016

The Eve Energy Switch and Power Meter is new, at least for users in the United States. Elgato has previously released a number of other HomeKit-enabled products onto the market including a window/door sensor, an indoor weather monitor, and an outdoor weather monitor – Eve Weather. I reviewed that back in September. 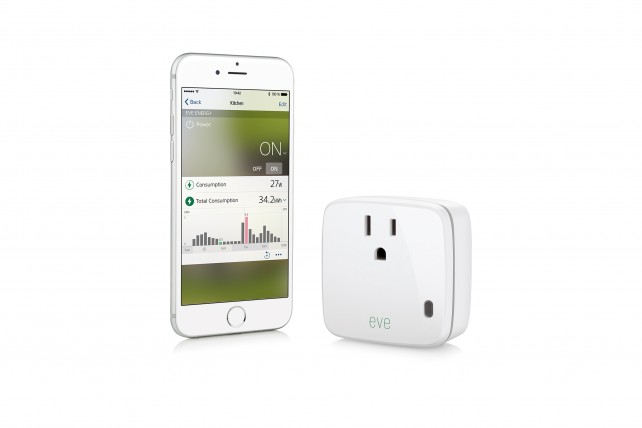 Elgato Eve Energy and Power Meter is small and compact and can bring some much-needed smarts to any power outlet.

If you’re new to smart home technology, a quick reminder about exactly what HomeKit does. The Apple-designed protocol was designed to make it easier for users to interact with products in the growing smart home market. The biggest advantage, for now, is the ability to control and check the status of different devices by simply asking Siri.

Previously available for a number of European countries, Eve Energy Switch and Power Meter is both a Bluetooth-enabled power switch and energy monitor. Like the iHome iSP5, users can turn one device on or off using Siri or the well-designed Elgato Eve companion app.

But the best feature of the device is the energy insights it can provide users. Using the app, you can view detailed usage information including the consumption and total consumption of a device in watts and kilowatt hours, respectively.

Getting everything setup and ready to go is a fairly simple process. I’ve been using the the switch for the last week plugged into a white noise machine in my master bedroom that helps my wife and I sleep better at night. You’ll need to do a quick install process using the app, but I was up and running in a few minutes.

Using Siri, I can turn the outlet on and off with a quick voice command. 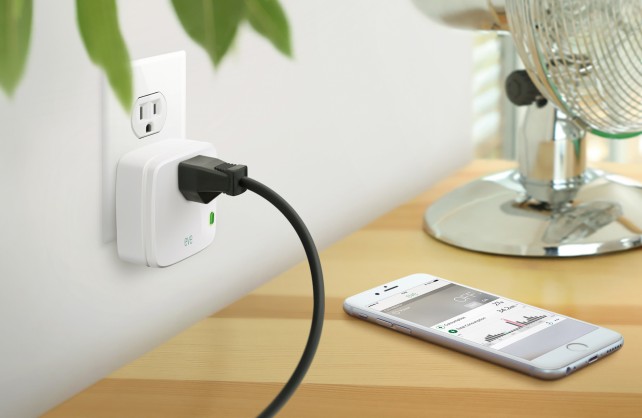 The switch is easy to setup and use.

The companion app itself is also another plus of the system. Along with being able to control all of your HomeKit devices, no matter if they’re from Elgato or not, you can also complete some advanced tasks like setting scenes and more. While I’m still holding out hope that Apple will include some type of stock app in iOS 10 to control HomeKit devices, the Elgato Eve app is the next best thing. Definitely download it, even if you’ve got other non-Elgato HomeKit items in your home.

Thanks to the Bluetooth connection, you won’t need to attach any type of other device to your router like some other HomeKit products. But that does come at a cost since Bluetooth’s range is much more limited compared to Wi-Fi.

While I was able to connect to the Eve Energy Switch and Power Meter from anywhere in my 1,800-square-foot, one-story house, anyone with a larger home and multiple stories could run into issues. Users with an Apple TV in range of the device can also turn the outlet on and off away from their home network. The set-top box acts as a bridge. 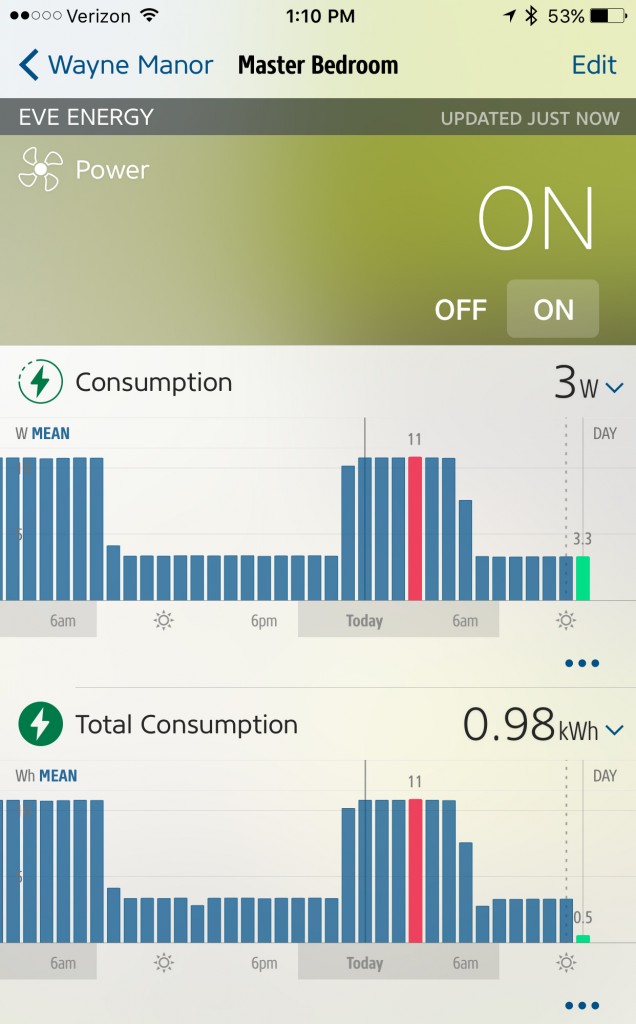 You can view energy information by month, week, day, or hour.

The energy usage information is definitely detailed and useful. You can drill down and look at usage by month, week, day, or hour. That would definitely be great if you’re trying to track down the cause of a high energy bill.

As you could probably tell, I’ve really enjoyed getting to use the Eve Energy Switch and Power Meter. The energy usage information is definitely handy, and the switch is easy to setup and use. The $49.95 price tag – while higher than other competing solutions – is fair for the features provided.

If you’re not interested in taking advantage of the energy insights and are just searching for a HomeKit-enabled switch, the very capable iHome iSP5 can be purchased now for $34.23. You can also take a look at my review of that device from last year. 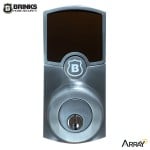 The upcoming HomeKit-compatible Array lock is powered by solar energy 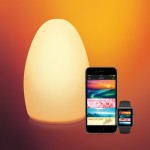 Review: Elgato’s Avea Flare brings a dash of app-enabled lighting to any room
Nothing found :(
Try something else