You are using an outdated browser. Please upgrade your browser to improve your experience.
Accessories
by Joe White
February 1, 2016

I’ve ended up switching Apple Watch bands far more often than I expected. After deciding on the stainless steel model and opting, for price more than any other reason, for a white Sport Band, I quickly suffered discomfort while wearing the plastic band and started investigating alternatives.

From here, I decided that natural leather was the way forward, and picked up the Classic Buckle from a local Apple Store. Then I had the opportunity to review HyperLink, a stainless steel Kickstarter-launched band, and loved it (but, once again, found that after a few weeks, the band itself started irritating my skin). So I went back to the Classic Buckle.

Then the Hermès collection launched and I saw the leather Cuff band appear on the wrists of folks on Twitter, and I really liked the design. Not wanting to purchase an Apple Watch in the Hermès collection outright (you can only get the band with a new stainless steel Apple Watch, since as of this writing bands from the collection aren’t available to purchase separately), I looked online to find companies producing what appeared to be similar quality cuff-style bands. Pad & Quill have been producing great iOS accessories, and namely cases, for a long time. I hadn’t realised it before, but the folks at Pad & Quill also offered a leather cuff-style band for the Apple Watch, which they call the Lowry Cuff. It’s not a replica of the Hermès band, and this is fine: after all, I wasn’t looking for a shoddy replica out of China, but an alternative band which rather featured a similar design.

Let’s take a look, then, at how Pad & Quill’s Lowry Cuff stacks up in real world use.

Pad & Quill’s Lowry Cuff comes in three colors: American Tan, Chestnut (the model we’re reviewing), and Galloper Black. It’s compatible with the 42 mm Apple Watch only. In terms of sizing, it can fit wrists between 125 and 215 mm. 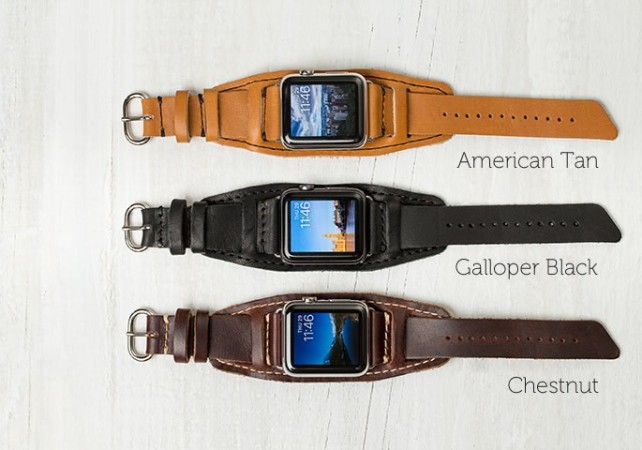 The Lowry Cuff comes in three different color options. Each one looks great.

How does the cuff feel on the wrist? Well, a couple of weeks into wearing the band day in, day out, it feels great. There’s no discomfort whatsoever; in fact, the Lowry Cuff is probably the most comfortable Apple Watch band I’ve ever worn. I love it.

I did have to tighten the band after a day or so of use, moving it a notch up, but this is common with leather bands (the material relaxes after you’ve worn it for a few days). However, there are plenty of notches either side for me to take advantage of if I want do, which is nice to see (especially since I don’t have huge wrists; because of this, I’d expect 42mm Apple Watch owners to have no trouble with the Lowry Cuff in terms of sizing, though more precise details concerning this are available at Pad & Quill’s website).

I love the design of the Lowry Cuff, too. The stitching looks great and I’ve had several compliments on the band since I started wearing it. Surprisingly, a lot of people seem to think the cuff makes the Apple Watch look “more like a normal watch.” I’m not sure I agree, but I’m nevertheless glad that the cuff is pleasing not only to my eyes. 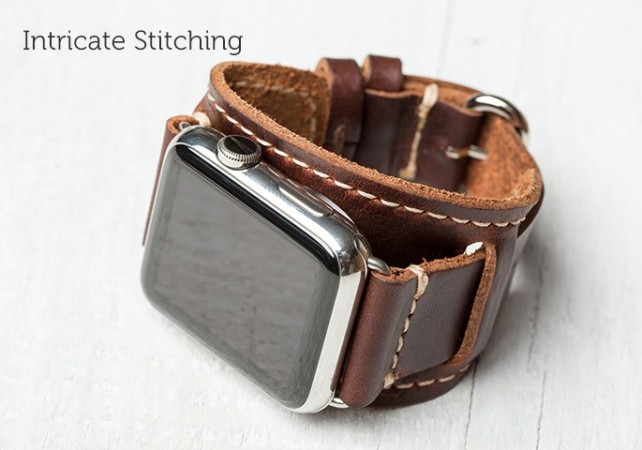 The Lowry Cuff is even signed by its maker.

Usefully, despite the chunkier design of the cuff, the band still allows the Apple Watch to maintain contact with the user’s wrist, and I’ve had no problems in terms of lost contact or mis-measured heart rate readings. And though your access to the Digital Crown and Friends buttons isn’t as clear as it used to be, I’ve had no problems accessing both buttons while wearing the Lowry Cuff. The bottom line, then, is that this band is a fine piece of design and craftsmanship, and it perfectly suits the Apple Watch. It’ll be an especially nice purchase if the Hermès collection has already caught your eye. Let’s take a look at the final breakdown. 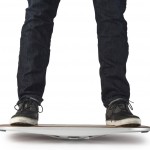 FluidStance Level keeps you moving while you work
Nothing found :(
Try something else