You are using an outdated browser. Please upgrade your browser to improve your experience.
App Bargain Bin
by Tyler Tschida
August 18, 2018

Play music on a digital optical organ, burst colorful balloons, and play a game of Reversi with today’s collection of apps and games.

Fresh Reversi ($1.99 → Free, 17.9 MB): Play a game of Reversi against computer-controlled opponents or your friends with this board game. Any and every board game fan.

Fresh Reversi allows you to jump right in and play. You’re able to compete against three different computer-controlled opponents, grab a friend and play locally, or play online. As you play you’ll see a running tally of the pieces you own at the top of the screen. You’re also able to have hints shown and change the starting position. The game includes full stat tracking as well.

Fresh Reversi is available for free for a limited time. It has a 4.5-star rating with a total of 498 ratings.

Legions of bloons are threatening Monkey Town and only you can stop them. Guide Super Monkey through the air while firing darts at the endless waves of bloons. Collect the blops that fall from the popped bloons and use them to upgrade your arsenal. The game includes 100 levels, 90 weapons, 40 power-ups, and a sticker pack.

Bloons Supermonkey 2 is available for free for a limited time. It has a 4.5-star rating with a total of 945 ratings.

iOptigan is a throwback to the 1970s. It’s a digital version of the optical organ, which was a chord organ that was able to play optically encoded discs. The rows of chord buttons in the middle of the screen allow you to play different loop patterns while your favorite track plays. Piano keys, special effects buttons, tempo and balance sliders, and other switches allow you to modify the sounds further. The app includes 25 of the original 40 discs, with the remaining 15 being available as in-app purchases.

iOptigan is available for free for a limited time. It has a 5-star rating with a total of 42 ratings.

Intro to Math includes five main educational activities: Red Rods, Number Rods, Sandpaper Numbers, Number Rods and Cards, and Numbers and Counters. The activities will not only teach your child how to read and write numbers from one through nine but also sequence, order, and spatial relationships.

Montessorium: Intro to Math is available for free for a limited time. It has a 3.5-star rating with a total of 382 ratings. 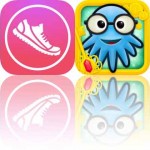 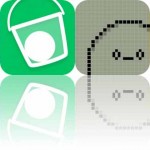