You are using an outdated browser. Please upgrade your browser to improve your experience.
App Bargain Bin
by Tyler Tschida
October 3, 2018

Help Luca achieve his dream, generate Droste effect images, and play a classic arcade game on your wrist with today’s collection of apps and games.

HyperDroste is just a whole lot of fun. The Droste effect is described as an image that appears recursively within itself. HyperDroste applies the effect in an instant to any photo taken or from your library. You’re then able to speed up or slow down the animation, adjust the mask, change the shape, and add various outlines. The final product can be exported as a still image, animated GIF, or video.

HyperDroste is available for free for a limited time. It has a 4-star rating with a total of 15 ratings.

Galaxia is an arcade game similar to Space Invaders and Galaxian that can be played on your wrist. The digital crown acts as your controller, allowing you to move across the screen and fire. Avoid alien fire and clear the levels to earn a high score. The game can also be played on iPhone.

GALAXIA 4 is available for free for a limited time. It has a 4.5-star rating with a total of 6 ratings.

Luca is a little soccer ball with the big dream of one day starring in the World Cup final. It’s up to you to guide this brave ball from his humble roots in Rio de Janeiro to the championship game by bouncing over dangerous obstacles and clearing puzzling paths. The game features hand-crafted levels with unique mechanics for each country, and various power-ups and special moves to utilize.

Luca: The Dreamer is available for free for a limited time. It has a 3.5-star rating with a total of 12 ratings. 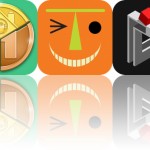 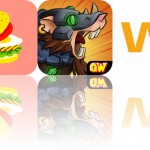