Get ready to quest with titans as new games flip into the App Store. There's a lot of variety this week ranging from hotly anticipated titles to surprising smaller games. The early highlights include a cat powered action RPG, console game spin off, flip flopping matching game, and much more. 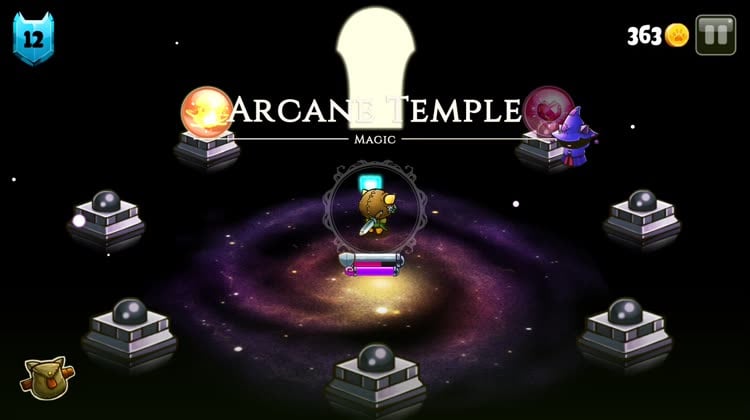 A 3D matching game that is all about shifting the play field to make matches.

Colored cubes roll in, and you swipe to rotate the cube play field at the center of the screen. The cubes already in place react at the center is rotated, and you try to make stacks and cascades of matching colors with a neat 3D perspective shift.

Play as a pineapple, cupcake, hot dog, noodles, and more with crazy controls for walking.

A game like QWOP, I Am Bread, Octodad, Steppy Pants, and similar with crazy controls to move the main character. There's no precision, and instead you're just try to move forward in any form you can. Silly Walks introduces household items as the main characters.

A fast paced and twitch based platformer with slides, dashes, and teleportation.

Hardcore platformers take the familiar style and amplify the difficulty with speed and precise obstacle placement. Standby delivers the style with a minimalistic presentation and multiple maneuvers. You can slide, shoot, teleport, and more.

A jousting style game with cars that are prepping to smash into one another.

The makers of Carmageddon have a brand new game that continues the car carnage action. This time, you face off in a drag race style in which both competitors are driving right towards each other. Maximize the damage, and witness the 3D physics engine in full effect.

A tactical strategy game set in a Sci-Fi world.

A tactical strategy game in which you direct your squad to the right positions to maximize attack position and defensive protection. Each member of your squad has a decision to make on their turn to use cover, suppressive fire, advanced weaponry, and more.

Amigo Pancho flies into the scene with balloons, and it's up to you to keep him in the air.

Amigo Pancho is back with his two balloons to fly through crazy levels. Your goal is to move Amigo Pancho past all kinds of obstacles with well time action puzzle maneuvers.

A spin off that delivers an endless version of the hoverboard adventure game.

Jump back on your hoverboard, and take on an endless version of Power Hover. This time, there are three stages built upon the premise of the original, but now more a zen style high score challenge.

You have probably played this type of game before as you catch, evolve, and battle monsters. There are over 300 monsters included within a classic story progression and world to interact with.