You are using an outdated browser. Please upgrade your browser to improve your experience.
by Brent Dirks
October 22, 2020

With the iPhone 12 and iPhone 12 officially arriving tomorrow, Apple has just updated iMovie.

There are two new major features in the update. Along with being able to import and share videos at 60fps, you can now also view, edit, and share HDR videos from a Photo library.

• Customize any title by selecting from dozens of built-in fonts
• Adjust the color of any title by selecting from a grid or spectrum of presets, adjusting numerical sliders, or using the eyedropper in the viewer
• Quickly change a title’s default style, capitalization and duration
• Pinch and drag to adjust the size and location of any title
• Choose from three new animated titles: Slide, Split and dual-color Chromatic
• Add solid, gradient, and patterned backgrounds to your movie
• Use the color picker to customize the colors of any background
• Drag the slider to change the intensity of any filter applied to your photos and videos
• Import and share 4K videos at 60 frames per second*
• View, edit, and share High Dynamic Range (HDR) videos from your Photos library**
• Tap the new options button at the top of the Share sheet to share a project or video file and choose properties including resolution, frame rate, and HDR**

iMovie is free and for the iPhone and iPad.

GarageBand received a smaller update. Here are all the new additions:

• New audio recordings can be quickly started from the Home screen by touching and holding the GarageBand app icon
• Maximum song length at default tempo has been increased from 23 to 72 minutes
• The ruler now offers an option to switch from musical bars and beats to minutes and seconds
New downloadable “Keyboard Collection” sound pack includes over 150 keyboard loops and 50 instrument patches like pianos, organs, and electric pianos

The app is also for the iPhone and iPad and can be downloaded now for free. 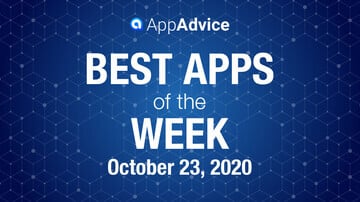 Best Apps of the Week October 23