You are using an outdated browser. Please upgrade your browser to improve your experience.
That iThingy You're Wearing
by Bryan M. Wolfe
September 20, 2017

The early Apple Watch Series 3 reviews are starting to come in. Unfortunately, they’re mostly poor with most reviewers highlighting two significant problems with the wearable device.

The week after Apple’s annual fall event is usually the time when millions are patiently waiting for their new shiny iPhone to arrive. However, with many forgoing the iPhone 8 for the iPhone X, this Friday’s launch day for new Apple products is all about the third-generation Apple Watch with LTE. The first Apple Watch not to require an iPhone to make calls, quickly sold out when pre-orders began last week. Unfortunately, there might be some buyer’s remorse when those wearable devices begin arriving this week.

The early reviews suggest the Apple Watch Series 3 (GPS + Cellular) has two major problems. The first, poor LTE connectivity, is already being addressed by Apple. The second, poor battery life, has yet to be addressed by the company.

Here’s a sampling of what reviewers have been saying.

The Wall Street Journal’s Joanne Stern doesn’t hide her early impression of the wearable device in the first two paragraphs when she explains:

There’s this moment in “Dick Tracy” where the fearless detective, chasing down a villainous gang, taps his magical wristwatch to call for backup. Then, realizing the battery is down to 8% and that cellular isn’t connecting, he ducks under a desk to find a power outlet and futz with the settings.

Poor Dick, he upgraded to the cellular version of the Apple Watch Series 3.

You’re lucky if the battery allows you to roam on cellular for longer than half a day—especially if you’re making calls. And only a limited number of third-party apps work without the phone close by.

A cellular device is, sometimes literally, a lifeline. That’s why I can’t recommend the cellular Apple Watch Series 3 until the connectivity is more reliable.

If you’re pushing the unique features of the Series 3 with cellular, you’re going to wipe out your battery quickly.

His conclusion is far less critical:

All that said, the Apple Watch Series 3 is the best phone watch I’ve tried. Setup is easy, and toggling from cellular to Bluetooth and back again is mostly seamless.

The Verge’s Lauren Goode also had LTE connectivity problems. The reviewer was also unimpressed with the unique red dot found on the cellular editions, complaining:

[The red dot is] a befuddling design choice, because once you, as the customer, have gone through the process of buying a $399 smartwatch and paying a monthly fee, I don’t think you’ll need another reminder of what you’re paying for….Maybe having a Watch with a red dot helps during the resale process, to prove that it’s the LTE model. Otherwise it just seems unnecessary.

Finally, The New York Times questions whether the $10 monthly fee for LTE for the Apple Watch Series 3 (GPS + Cellular) is worth it, explaining:

The value of the cellular capabilities on the Apple Watch is questionable considering the price you pay each month.

AT&T and Verizon Wireless, for example, charge a network access fee of $10 a month to share your phone plan’s texts, minutes and data with an Apple Watch. That’s about the same as a Spotify subscription, but with the exception of avid joggers and gym rats, people may not use the cellular features frequently enough.

There’s a lot to take in here.

As one of the first Apple Watch 3 buyers, I’m not all that surprised hearing about early LTE connection issues. This type of feature hasn’t been done before on an Apple Watch and therefore, hiccups should be expected, at least early on. Apple’s already promised a fix for this.

I’m more concerned about the quick battery drains, even though they do tend to match Apple’s initial promises. The issue: We’ve been down this road before with the first-generation Apple Watch. Let’s hope Cupertino can improve these numbers through a software update.

(Apple says the Watch’s battery will last over one hour of talk time while connected directly to LTE and up to four hours during an outdoor workout with GPS and LTE.)

What early issue concerns you most about the Apple Watch Series 3 with LTE? Let us know below.

What early issue concerns you most about the Apple Watch Series 3 with LTE? 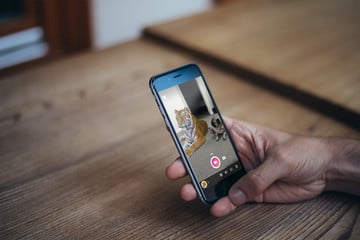 Holo Brings ARKit to Your Photos and Home Videos