You are using an outdated browser. Please upgrade your browser to improve your experience.
by Christine Chan
February 23, 2018

Whether we like math or not, it's a part of daily life for everyone. Yes, your grade school math teacher was right, as a matter of fact. We deal with math in everyday discounts, figuring out how much to tip a server, finding how much interest we earn or owe, and more day-to-day situations.

While we always have the built-in Calculator.app on our iPhones and iPad, there's always alternatives out there. One of our favorites is Calzy, simply because it has a gorgeous aesthetic and boasts some powerful features. And today's update improves the app in numerous ways. 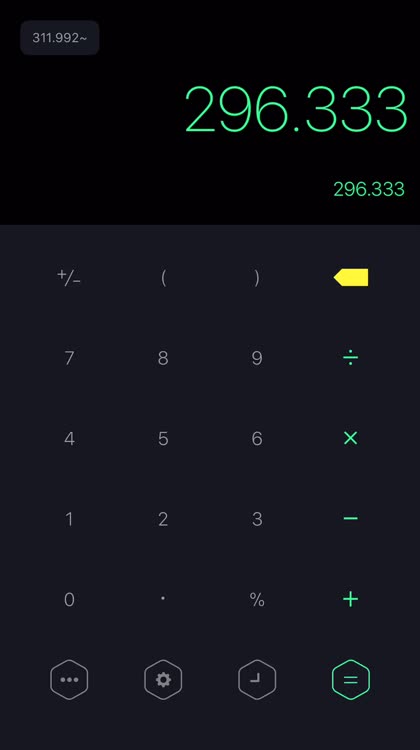 In Calzy 3, there's a new "Memory Area" at the top of the screen. When you have calculated a result and want to reuse it in multiple calculations, just drag-and-drop it to the top area of the app.

When the time comes to reuse it, just drag it from the top of the screen to the operator button you want, and Calzy does the math. It's super simple and intuitive, making it easier than ever before to reuse calculated results multiple times.

Previously, while Calzy had a scientific calculator mode, you had to rotate the device to landscape mode to use it. If you're like me, you may have rotation lock on all the time because of unintended rotations while browsing something in bed. Fortunately, that's a thing of the past.

Calzy 3 now makes use of 3D Touch buttons, so it's easier to get access to what you want. To toggle scientific mode, just 3D Touch the gear icon, and then choose the scientific option — you can also go back to basic mode this way too.

On top of that, Calzy has 3D Touch shortcuts for toggling dark/light mode, currency rounding, and viewing the settings.

For the most part, the default keypad in Calzy works out well for me. But that may not be the case for everyone, so Calzy lets you customize pretty much everything.

Just go into the Settings and choose "Keyboard Layout." Here, you can rearrange the buttons on the keypad into a layout that suits your needs. Perhaps you want the operator buttons on the left instead of right? No problem. Just long-press and drag to reorder. You can do the same with the Widget and iMessage extension.

Calzy has a Light or Dark Mode, along with Extra Dark for those of you who prefer blacks instead of grays. You can also choose an accent color, in case the default green isn't good enough for you. There's also new app icon choices to choose from, if you want to match with your selected color accent. 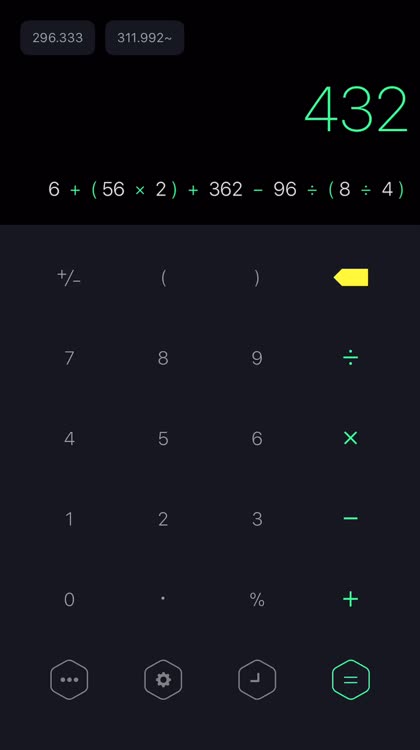 If you're calculating long expressions, you may end up making a mistake somewhere along the way while inputting the digits. Calzy lets users just tap-and-hold to edit a single part of an expression, so you don't have to backspace the entire way or clear everything out.

There's also a new "Spell Out" feature, where you can spell out a number in English or 65 other supported languages. Rounding numbers up is insanely useful in reality, and Calzy 3 has support for both decimal and currency rounding. This is great when you don't want to use a number with over five decimal places, for example.

Calzy's also able to keep a complete history of the calculations you've made. You can check the History, and then take action on individual expressions if you want through a long-press. If you add a label to one, it'll appear in Bookmarks for easier reference.

Bookmarks can be found in iOS Spotlight Search, so you don't even have to open up the app to check something. There's also Touch/Face ID support for locked calculations, because finances are a private matter, after all.

Since Calzy 3 is a universal app for the iPhone, iPad, and Apple Watch, there's iCloud sync for your settings, history, and bookmarks across all devices. Handoff is also supported, allowing you to start a calculation on one device and then seamlessly pick up where you last left off on another device.

For those who use Calzy on the iPad, there's Slide Over and Split View support, as well as Drag-and-Drop into other apps. External keyboards are also supported for those heavy-duty calculating sessions. Calzy 3 also has native support for English, German, French, Russian, Japanese, and Simplified Chinese.

Math Has Never Looked So Good

While the default Calculator.app may be enough for many, Calzy 3 offers a beautiful design and intuitive, smart features to make calculating things easier than ever before. It's one of the better calculator app options out there on the App Store, and this huge 3.0 update makes it better than ever.

Calzy 3 is a free upgrade for previous users. If you haven't used it before, you can get Calzy on the App Store as a universal app for your iPhone, iPad, and Apple Watch for just $1.99. 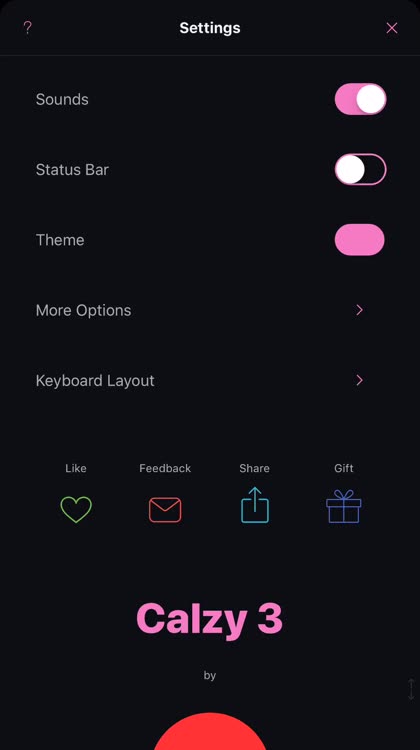 Calzy 3 features a Light and Dark mode, with the bonus Extra Dark if you prefer pure blacks for your iPhone X. You can also choose the accent color. 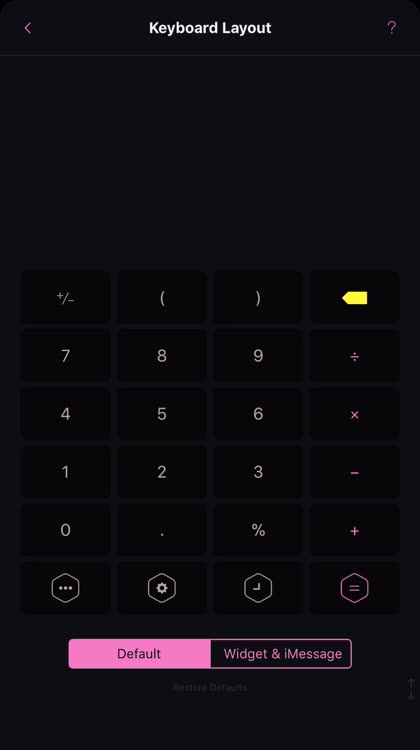 Just drag-and-drop the buttons to where you want them. 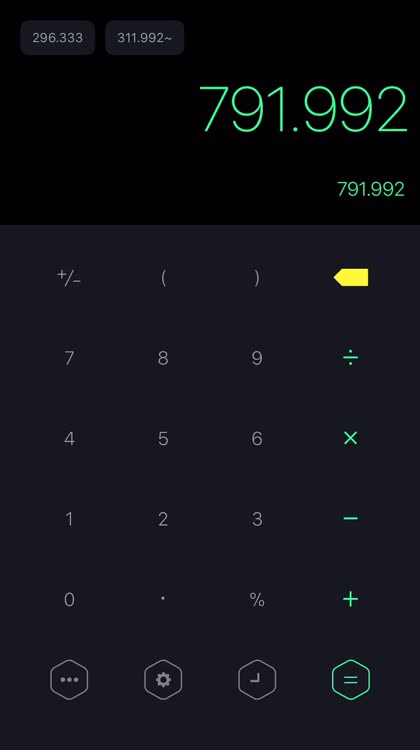 You can view your history of calculations in the app, and even name them to bookmark them for later reference in Spotlight. There are also several actions you can do with each expression or result.

If you make a mistake in the expression, just tap and hold on the part you want to edit. Make your changes, and you're good to go!

If you want to reuse a result for later, just drag it to the memory area at the top of the screen. Then you can drag it down to the operator you want to use it with, and it's included in your calculation magically. 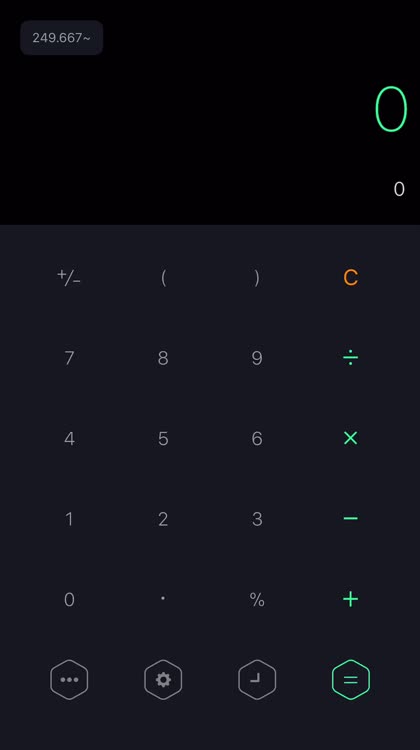 You can quickly access scientific or basic mode through a 3D Touch toggle, as well as other options. 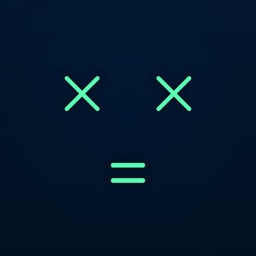