You are using an outdated browser. Please upgrade your browser to improve your experience.
by Brent Dirks
December 4, 2018

It’s time to beam up to a great new multiplayer role-playing game on the App Store.

Star Trek Fleet Command is based on the more recent Star Trek movies from 2009, 2013, and 2016 starring Chris Pine as Captain Kirk.

And the game combines both role-playing and real-time, multiplayer battles with other enemy ships.

You’ll enter the galaxy on the brink of war with a number of different factions including the Federation and Klingons. Commanding a starbase, players will recruit officers like Nero, Spock, Kirk and others to help build ships like the Enterprise.

Players also have the chance to customize their gameplay experience with numerous narratives across the available missions. How gamers interact with others will also shape the experience during play.

As a fun touch, the game also features AR technology where you can bring the USS Enterprise into the real world. Players can even capture screenshots to share.

Star Trek Fleet Command is designed for the iPhone and all iPad models. It can be downloaded now on the App Store for free. There are a number of in-app purchases available.

You can also try the game out on PC via the BlueStacks platform. The benefits to this include greater accuracy thanks to the mouse, more comfort, and to play the best possible version of the game.

BlueStacks mimics the specs of the most powerful phone that's capable of running each game, so you'll always get the absolute best experience. Grab BlueStacks on the official site right now, and Star Trek Fleet Command right here.

In the multiplayer real-time strategy and role-playing game, gamers can create their own factions with popular characters like Captain Kirk and others. 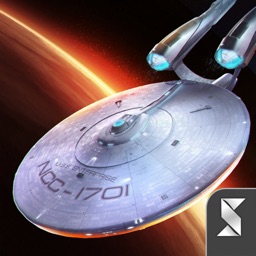 Star Trek Fleet Command
Scopely
Nothing found :(
Try something else