You are using an outdated browser. Please upgrade your browser to improve your experience.
by AppAdvice Staff
July 3, 2018

Although Ubisoft’s Might & Magic: Elemental Guardians is a satisfyingly fun single-player experience in itself, you don’t have to go it alone if you don’t want to. There are ways to both fight against and team up with other players to get even more out the game.

We’re here to walk you through both types of multiplayer: the player versus player arena and the guilds missions. Let’s begin with the Arena, where you can test your mettle against other teams of creatures assembled by other players worldwide.

All about the Arena: How to master Elemental Guardians PvP

All about the Arena: How to master Elemental Guardians PvP

You can find the Arena just to the left of your main island on the game’s main screen, on a smaller island that looks like a little colosseum with a blue flame burning from a torch at the top. 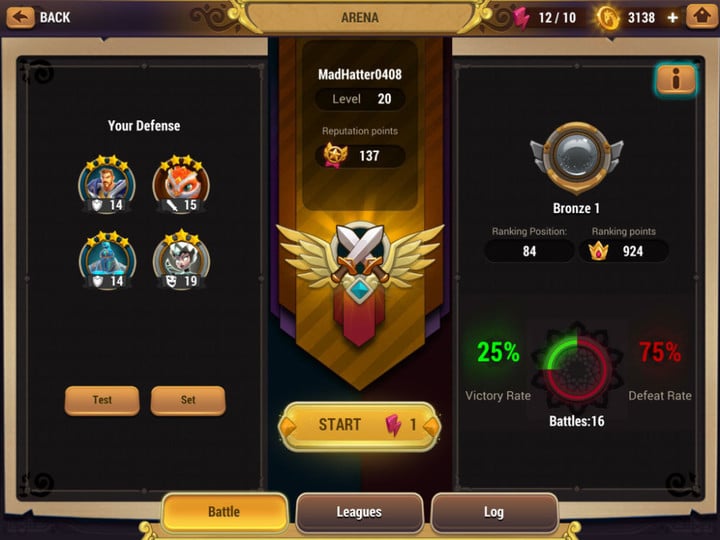 Tapping it will send you on your way into the game’s asynchronous PvP mode. In plain English, that means that while you are competing in 4v4 battles against other players’ teams, those players aren’t actually controlling them. Instead, the AI handles battles for the defending player, just as it does for you when you are attacked by someone else in the Arena mode.

In fact, that’s the best place to start. When you first enter the Arena you’ll see the Your Defense tab on the left side of the screen. If you tap the Set button, you’ll have the option to choose any four creatures in your collection to be the team that opponents face when they challenge you in the Arena. 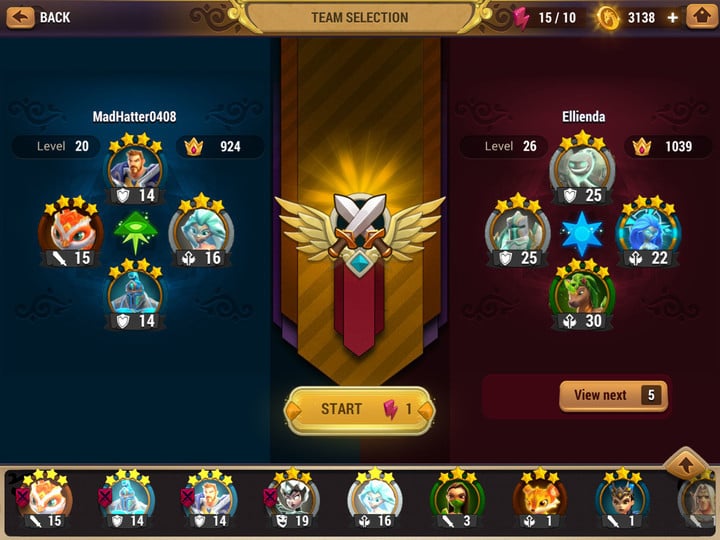 Naturally, your first instinct will be to pick your four toughest creatures, but the same tips for choosing a well-balanced team in any other game mode apply here. You’ll want to have a good mix of roles and elements because the defense squad needs to be able to handle as many different opposing teams as possible, particularly since it won’t have you to help call the shots in combat.

Before jumping into an Arena battle, you might want to familiarize yourself with the other two options at the bottom of the screen.

The Leagues tab takes you to the leaderboard of your current league. Within each league there are up to 100 players, all vying for spots further up in the rankings. Each league season lasts for one week, during which you can play as many Arena battles as possible. 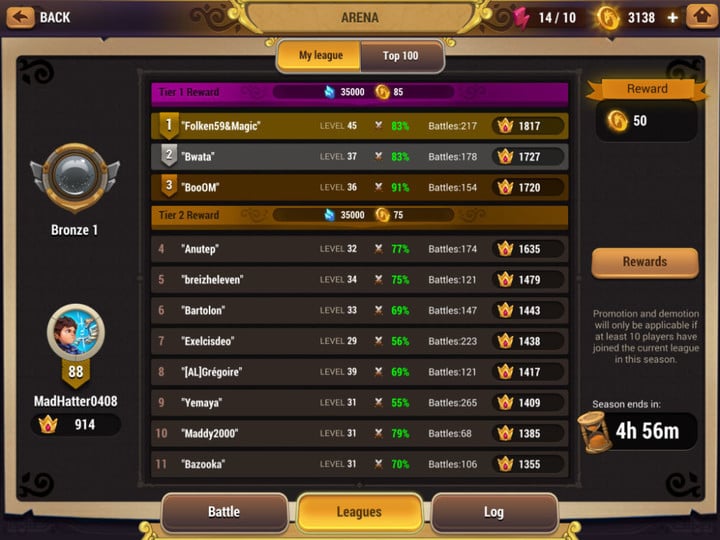 Every win gets you Ranking Points, which are represented by a small crown logo, while each defeat loses you some instead. The object in each league season is to get enough Ranking Points to move up to a higher tier within your own league, or even enough to place in the top 10% of your league, which promotes you to the next league for the next following season. The higher the league, the better the rewards you’ll earn in Arena play, regardless of tier.

The Log tab is even simpler, as it displays the results of the last ten Arena battles you’ve played on defense, as well as the outcome of those battles. You can attempt to get revenge on an attacker right from this screen simply by tapping on the Challenge button beside any opponent who has attacked you.

Bonus tip: Every Arena battle, including challenges to opponents who have attacked you, costs you one unit of Arena Energy, which is separate from your normal Energy and runs out much faster, as your max amount of it is much smaller. You can find free Arena Energy in chests, so be sure to take advantage of that fact.

Once you hit the Start button, you’ll be taken to a screen where you can see the team against whom you are about to throw down. Don’t like your chances? You can tap on the View Next button on the right-hand side and replace your prospective foe with another team from the same league. But be warned: you can only use that option five times before you have to wait about 30 minutes for it to reset.

Within the Arena, combat proceeds like it does in any other level in the solo mode of the Shattered Islands.

After each match, you’ll see which rewards you’ve earned (if you win, of course!) and how your Ranking Points have been affected by the outcome. 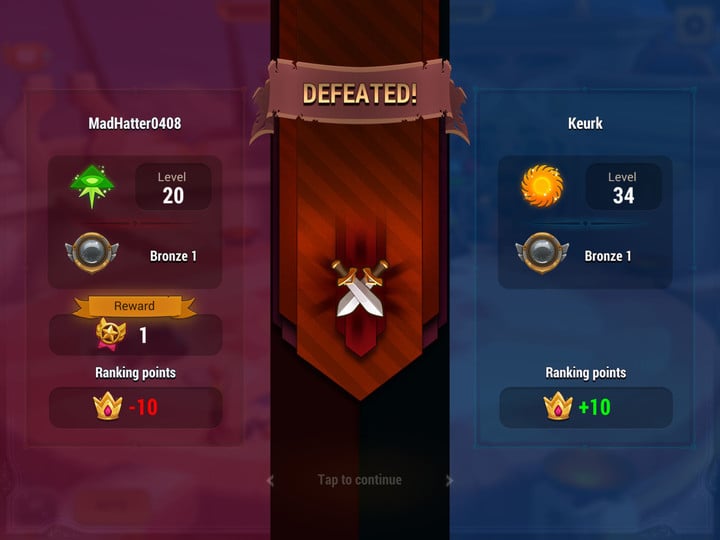 Bonus tip: If you can see that you’re going to prevail easily or that your team has no chance of winning an Arena battle, you can speed things up considerably with the buttons in the lower-left corner.

Tap the Auto button to let the AI take over your team and the other button twice to speed up the action to three times the normal speed. Just be sure you’re okay with that, because the AI isn’t likely to make combat decisions as savvy as the ones you would make yourself.

A great additional feature you might want to check out is the ability to play these matches in AR, which you can do by tapping on the cube icon in the upper-right corner.

Guilds: How to join one and why you should

Guilds: How to join one and why you should

Let’s be real: even the most introverted of gamers enjoy playing with friends. Might & Magic: Elemental Guardians allows you to do that that by joining a Guild, where you can band together with other like-minded players in pursuit of rewards you wouldn’t be able to earn alone.

To join a Guild, simply tap the Search button and you’ll be taken to a list of groups looking for new members. Among the information you’ll see is the Guild’s level, any conditions required for new members to join, and what the expected activity level is for members of that group. 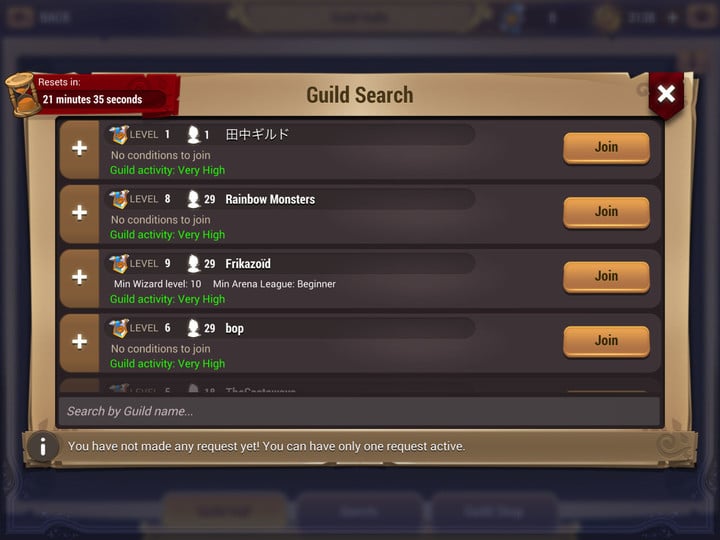 If you’d rather create your own Guild instead, that’s easy to do. Just hit the ‘Create’ button and you’ll be able to name your Guild, enter a brief description, and set the following conditions:

Once you’ve set your desired parameters, you just need to spend a fee of 30 Seals and you’ve got yourself your own Guild.

Why would you want to join or create a Guild? Along with the obvious sense of camaraderie that comes with playing Elemental Guardians with other people, Guilds can tackle Quests that offer rewards inside the Guild Shop that you can’t get anywhere else.

On top of that, while the game doesn’t currently have raids or other similar content there’s an expectation that they will be added to the game in the not too distant future, so players want to be prepared.

That should be all you need to know about fighting or teaming with other players in Might & Magic: Elemental Guardians. Be sure to check out our beginners guide for even more helpful tips and tricks. 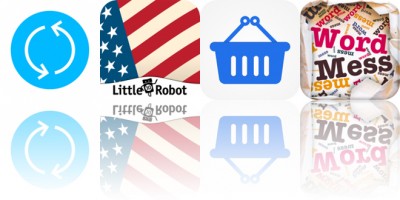 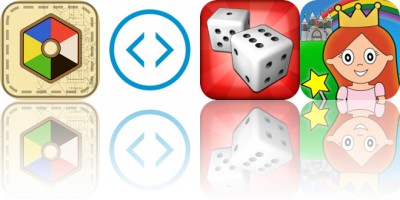