You are using an outdated browser. Please upgrade your browser to improve your experience.
by Brent Dirks
June 11, 2021

Some games are supposed to consume your life, monopolising your consciousness and transporting you to parallel dimensions full of wonder and intrigue. Not Rickle.

Rickle sits at the exact opposite end of the spectrum. This hyper-casual mobile game involves making a pile of stones, and that’s about it.

Rickle is a tower-building game. It sees you trying to build the tallest stack that you can out of slabs that fly in from the left and right. To place these slabs on your tower you just need to tap the screen.

The aim is to place each slab flush with the one below, but Rickle is a game of attrition. Sooner or later you’ll falter, placing a slab too early or too late. This leaves an overhang, which gets chopped off, diminishing your tower and making the next placement harder.

You’re chasing two carrots in Rickle: your own high score, which is always displayed in the top-right of the screen, and the next world.

To help you keep each attempt alive you’ve got three consumable power-ups: one that automatically places a slab flush with the top of the tower, one that slows the incoming slabs down for a spell to make it easier for you to place them, and one that resets the incoming slabs to full size.

These power-ups are consumable but totally free. You buy more with the gems you earn through gameplay, and by watching videos. Rickle is refreshingly IAP-free.

While it’s not spectacular in technical terms, Rickle looks stylish and slick in an understated sort of way. It’s text-free, too, making it both universally accessible, if slightly confusing for the first few minutes.

And it’s a quietly addictive little casual game. There’s satisfaction to be found in building the highest tower you can and unlocking new worlds, though the dynamic shifts as you work your way through the game and the intervals between new worlds grow larger.

In that sense, Rickle has more in common with Peter Molyneux’s Curiosity than, say, Rising Sushi - a fact underlined by the Sunflower Race that developer Polyworks Games is running this summer, which comes with a cash prize.

Outside the gameplay, Rickle lets you help make the world a slightly better place.

How? A portion of the revenue from Rickle goes to three environmental charities: the Natural Resources Defense Council, the Union of Concerned Scientists, and the Environmental Working Group.

We won’t give you the spiel on what these charities do, as you can find that info on Google in your own time. Suffice it to say that they all advocate for a safer, cleaner, more sustainable planet.

While we’re totally down with Rickle’s charitable mission, and we’re onboard with its distinctive gameplay arc that emphasises long-term progress over the usual smash-and-grab casual gaming hijinks, there’s no getting away from the fact that it can be a little bit bland.

Most tower-building games contain an element of physics. It’s fun to build a tower, but it’s more fun if that tower lists and teeters, and if misplaced blocks dangle perilously, like the bus in The Italian Job.

Plugging away at the goal of winning a race is what makes Rickle appealing after a while. The basic block-stacking mechanic is fine, but it’s a tad too monotonous to hold your interest for long. Fortunately updates seem to be on their way to help mix things up and keep you playing. You can check out the game for yourself via the App Store and Google Play, and there’s an official site as well.

Rickle is a decent casual game with solid presentation and an admirable philanthropic mission. It’s worth a look in a block-stacking genre that is perhaps a bit overcrowded. 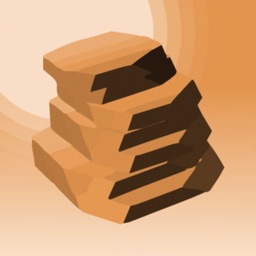 Rickle
Polyworks Games LLC
Nothing found :(
Try something else