You are using an outdated browser. Please upgrade your browser to improve your experience.
by Brent Dirks
July 2, 2018

For a generation of British school kids, Chuckie Egg has some incredibly positive associations. You see, its home was the BBC Micro, and the BBC Micro’s home was at school. 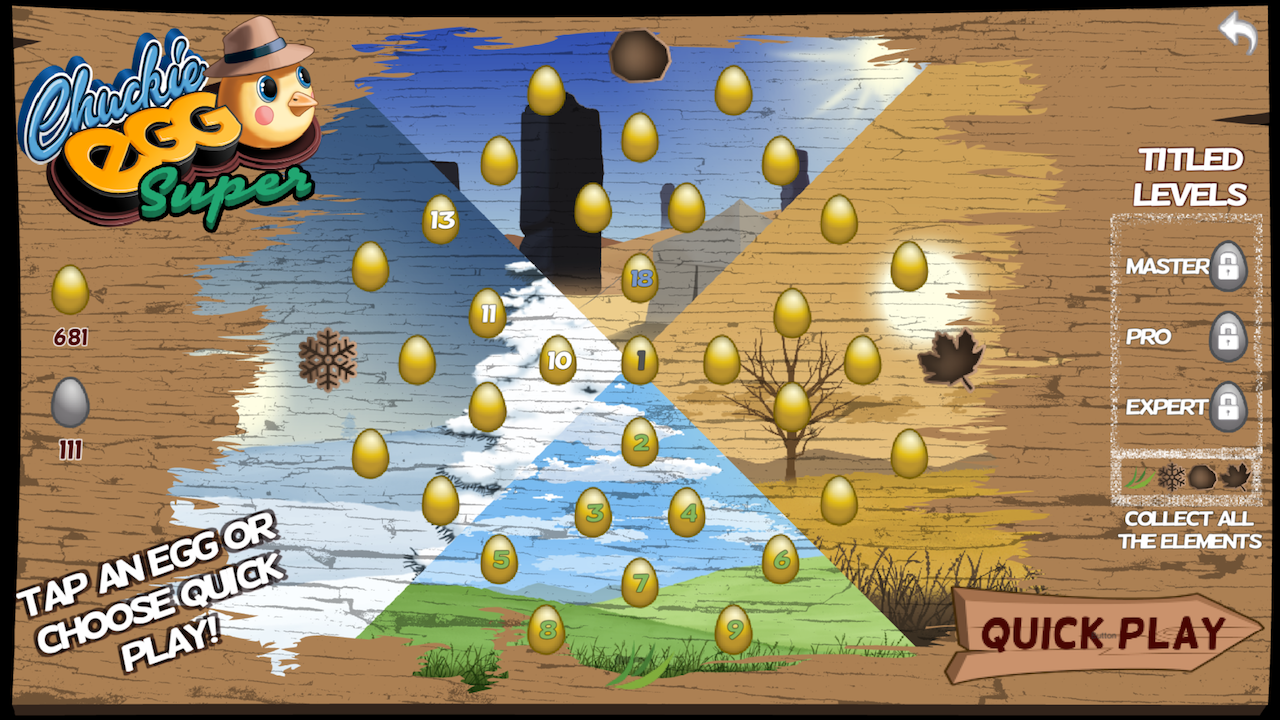 That meant most of us only ever played Chuckie Egg on that most glorious of occasions: the last day of term. For the rest of the year, the game sat silent and tantalizingly out of reach in its metal prison.

But rose-tinted spectacles are a dangerous thing. They are associated with numerous cases of crushing disappointment every single day as aging gamers dust off their fondly remembered vintage games only to discover that they are, and were always complete and utter garbage.

Can Chuckie Egg escape this fate?

Developed in the early 80s by a teenager called Nigel Alderton, Chuckie Egg sees you climbing ladders, navigating platforms, and avoiding enemies as you attempt to collect all of the eggs in each stage.

Super Chuckie Egg naturally embellishes on the original. It embellishes on last year’s Chuckie Egg 2017 as well, replacing the slow, deliberate, tricky gameplay of that remake with faster, easier, and more modern gameplay in which you race along collecting a string of eggs, the camera zooming in and out dynamically like in a Bourne film.

It contains 36 stages across the four seasons of the year, and five difficulty levels. Unusually, you can play any stage you like from the outset, and once you’ve completed the game you’ll get a chance to play the Title levels for additional kudos. 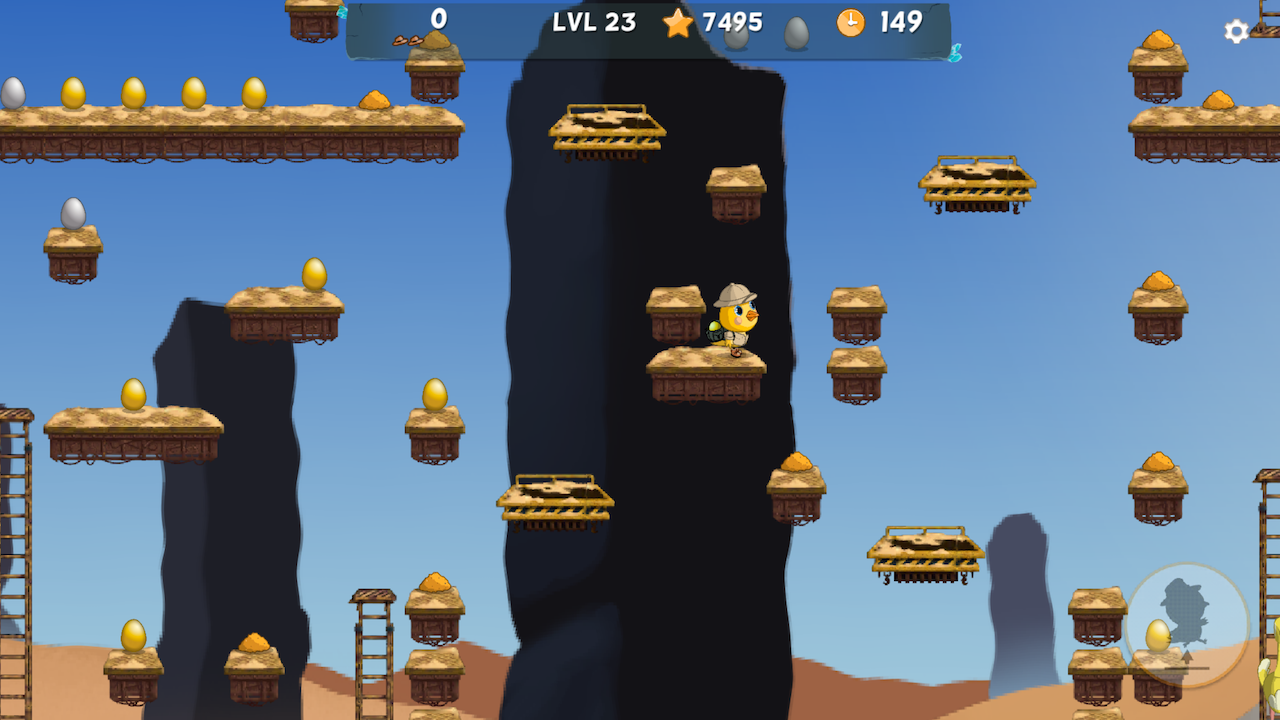 Super Chuckie Egg is a genuine update, and it feels much fresher than last year’s Chuckie Egg outing, with significantly improved graphics and gameplay.

As you work your way outwards from the center of the season clock the stages get more difficult, but even at ‘challenging’, they’re no harder than the early levels in Chuckie Egg 2017. This is a game that wants you to kick back and have a good time.

The tighter controls help, as do the zoomed-in graphics, which together give you a greater sense of control over little Harry, encouraging you to attempt more exciting and dynamic jumps.

Also, it’s just a lot more satisfying to collect long strings of eggs rather than individual eggs dotted around. The addition of silver eggs gives the game a bit of extra texture too since you can decide whether or not to clear up or just collect the golden eggs you need to complete the stage. 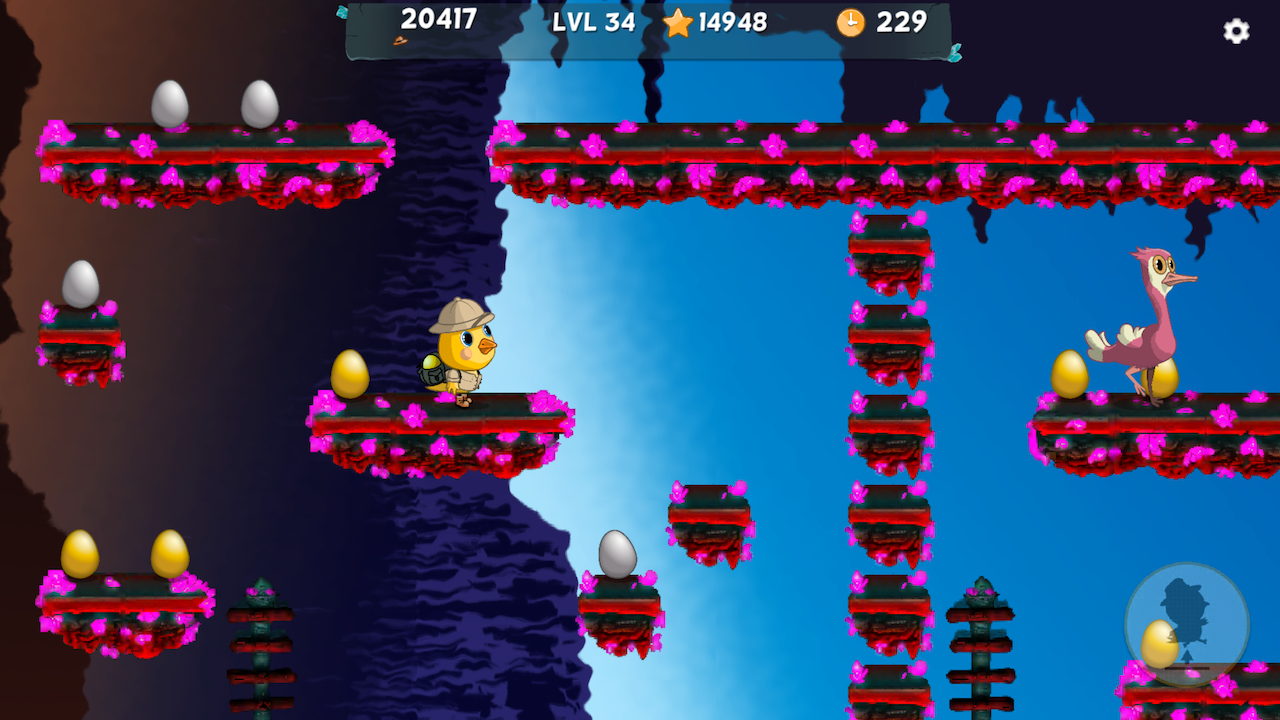 While we enjoy the novel way the game lets you play pretty much every stage from the outset, 36 is a small number of levels in a modern platformer. Yes, you can play them all at five different difficulties, which materially affects how they play, but we would have liked to see more unique stages.

Likewise, while there’s no question that Super Chuckie Egg is a massive improvement on its far less ambitious predecessor, we feel more could have added to the franchise to bring it up to date.

For instance, there’s only one gameplay mode. Developer Downsideup Games has some experience experimenting with mini-game variations on Chuckie Egg with this year’s Chuckie Egg Pop!, so it’s a shame not to see more of that creativity here.

Super Chuckie Egg is a major leap forward for the venerable franchise, taking a character from the prehistoric age of videogames and giving it a chance to shine in a polished, playable, fun platformer.

We’re only hoping that Downsideup Games can pull out even more stops for the next Chuckie Egg spin-off. With a few more modes and a little bit more ambition, little Harry might even find himself in the Premier League of platformers again. 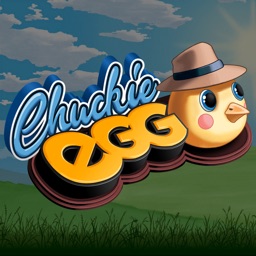 Super Chuckie Egg
Downsideup Games
Nothing found :(
Try something else