You are using an outdated browser. Please upgrade your browser to improve your experience.
by Christine Chan
November 16, 2017

Highwind ($0.99) by Selva Interactive is a unique shooter that involves paper airplanes, and a lot of them. If you enjoy shooters such as Danmaku Unlimited 3 and AKA TO BLUE, but want a touch of minimalism, then Highwind is one to check out.

Life gets hectic (it definitely has been for me the past few days), so there's nothing better than sitting down to unwind and relax. Usually for me, this involves puzzle games of some sort, but every now and then I need something different. If it's not puzzles, it's probably an arcade game that involves shooting things up. I'm a big fan of bullet hell shooters, but when I saw Highwind, I was intrigued by the style. It's definitely a game that is different and unlike anything you've played before, which is never a bad thing. 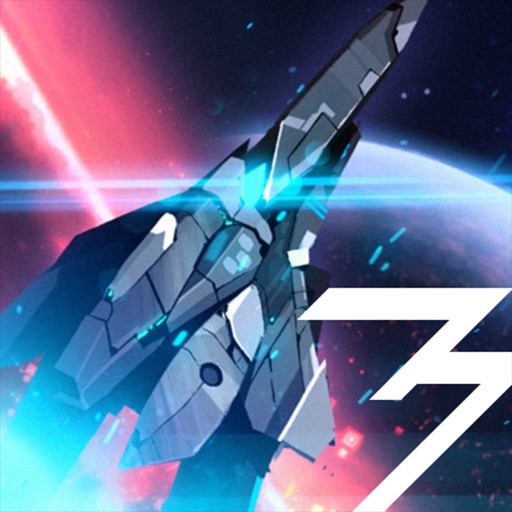 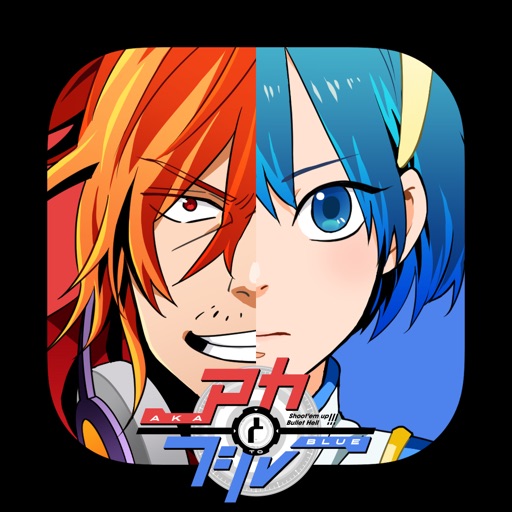 AKA TO BLUE
TANOSHIMASU CO.,LTD.
Free 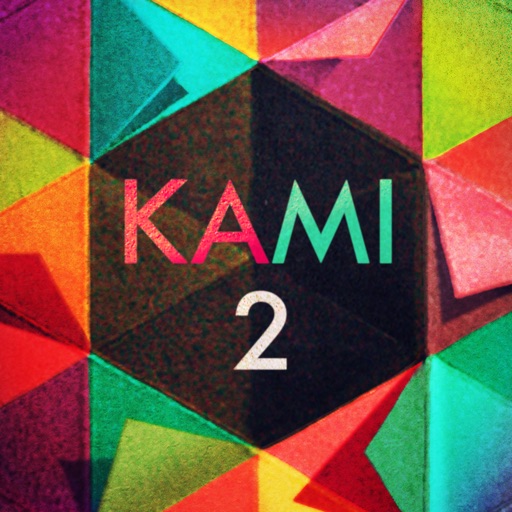 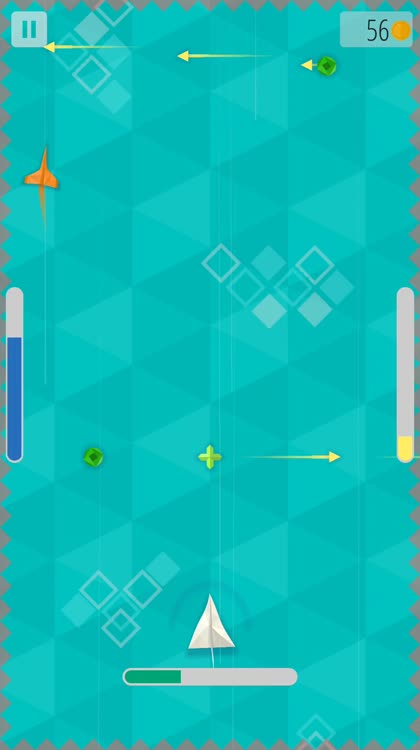 Visually, Highwind has a simple and clean aesthetic that works well. Since the focus in Highwind is on paper planes, the graphics feature a paper origami style look and texture that is basic but pops out thanks to the color and shading. It's reminiscent of games like KAMI 2, which is lovely. Highwind's color palette is a great mix of bold and vibrant hues with subtler, muted tones, so everything contrasts nicely. Animations are buttery smooth and fluid on my iPhone 8 Plus, with no lag or choppiness in frame rate. There's also an upbeat and soothing atmospheric soundtrack that I found rather relaxing. The sound effects are fun and sci-fi style. The developers did an excellent job with Highwind's visual and audio design.

In Highwind, while there are levels, players have to start from the beginning on each run. This part is a little annoying, as I wish that there was a way to just select the stage you want to start from. Still, it's fun to watch your progression over time. The game is also randomly generated each time, so the enemy waves are different on your plays. The goal is straightforward: defeat all of the enemy ships in each wave, while avoiding other obstacles in order to move on to the next stage. While it sounds easy enough, the game's unique mechanics make things much more complicated than they seem on the surface.

The controls are simple but take some time to master. Your paper plane ship is centered on the screen and remains stationary. However, the background appears to shift to give you that sense of movement for your ship. You cannot manually move your ship around. When you tap on the left side of the screen, it will activate your shields to block incoming enemy attacks. Tapping the right side of the screen lets you shoot your plane's weapon, and a long-press does a charge attack.

To set Highwind apart from other games is the fact that you have a limited resource for your shields and bullets. There are gauges on the left and right sides of the screen to tell you how much charge you have for your shield and weapon. If they're completely depleted, those functions won't work. Fortunately, they replenish rather quickly, but still need time to do so. The key is to manage your resources wisely between defending yourself and attacking. You also can only take three hits before you die, and it's game over.

Another thing about Highwind that makes it challenging is the fact that sometimes you can't reach the enemy ships. There are special items that will spread your bullets out when they hit them, causing you to hit enemy ships that are moving in at an angle. Some enemies also fire bullets that can be deflected with your shield, so it's all about timing.

Once you clear a wave, there will be a mini-game of sorts before you move on to the next round. These mini games are usually obstacle avoidance courses, and you'll want to do as best as you can. As you play, you earn coins for defeating enemies, and if you get hit by an attack or run into an obstacle, you lose some coins.

After the mini-game, you're awarded with an opportunity to upgrade your plane. You can choose to upgrade your shields, ammo, or health. These upgrades cost 100 or 200 coins each. If you don't have that much, and took some hits prior, you can also heal for 60 coins.

Once you've taken too much damage, then it's game over. You get points awarded for your performance, and these accumulate over time to unlock rewards. These rewards include new planes, and each plane has their own strengths and weaknesses. You can see the stats for each plane on the Plane Select screen, where each stat is color coded (blue shields, yellow ammo, and green health). There are also additional game modes that vary the gameplay mechanics; there are a total of five different variations.

Highwind is a beautiful arcade shooter that is unlike anything you've played before. 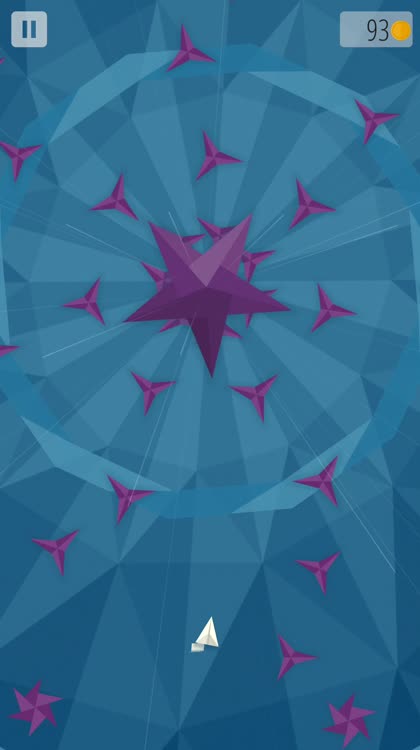 Highwind is a unique shooter that truly is unlike anything you've tried before. The game has a gorgeous origami-like style and the sounds are special and distinctive. While there's only one game mode, the randomly generated enemy waves and unlockable style variations keep everything fresh and interesting. It does take some time to get used to the controls, since your ship doesn't move, but this is what makes Highwind stand out in the App Store. 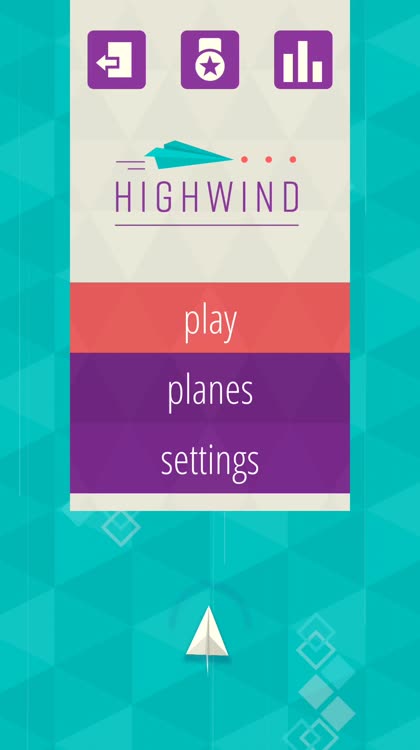 While Highwind has a lot of interesting aspects going for it, the "dodging" aspect of the game is a bit boring. You basically just need to get your shields up in time to deflect enemy attacks, and well, it's not the most exciting thing ever. I'm not sure how this part of the game can be improved, but it would help if there were slight tweaks.

Highwind is an interesting and fresh take on the arcade shooter genre. The minimalist art style and music are soothing, the controls work out well, and the gameplay mechanics bring a real challenge to the game. I like that there are plenty of unlockables that you can obtain in the game, and there's a lot of replay value with the randomly generated stages. I just wish dodging attacks was a tad more fun.

I recommend Highwind to anyone who is a fan of arcade shooters and wants to play something different. You can find Highwind on the App Store as a universal download for the iPhone and iPad for $0.99. 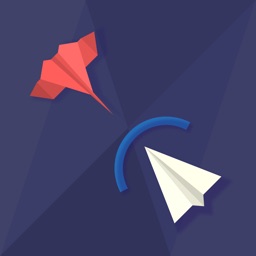 Highwind
Selva Interactive
Nothing found :(
Try something else