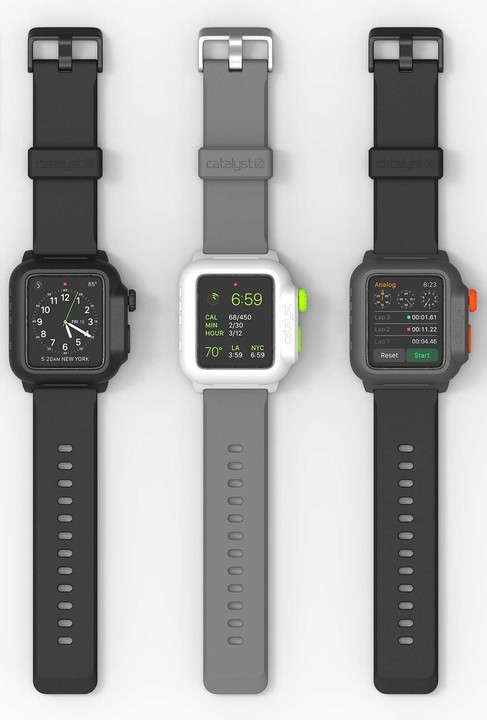 You can select from three different color options.

It’s quickly turning into the dog days of summer here in the United States, so that means lots of trips to the pool – or maybe the beach – to keep cool. And while I don’t mind leaving an iPhone in a swim bag, my Apple Watch is a different matter.

Along with the most obvious use for the device, checking the time, I also depend on the watch to view any important notifications and keep track of my daily step count and exercise information. The only time I’m without the watch on my wrist is when I sleep, so I’m not going to let a little water bother my routine.

One of the best kept secrets of the watch is that it is water resistant to a point. Even though Apple says that the device can fend off sweat, rain, and water from washing your hands, it recommends that you don’t swim or bathe with the watch.

Even so, Apple CEO Tim Cook admitted he showered with the watch and a number of other tests show that the device survived a 1,200 meter swim and even a dive off a 10-meter platform.

But as with most expensive electronics, it’s better to be safe than sorry around water. And Catalyst offers a nice way to protect the device with a specially designed case.

The top draw is that it can protect the watch in up to 165 feet of water while still offering direct and uncovered access to the screen. All features of the watch, including the heart rate sensor and microphone/speaker, are fully operational even with the case installed.

Installation does take a few minutes. After opening the box, you’ll see the complete setup – the case itself is attached to a masculine silicone strap. Inside the two-part case is a dummy watch unit that holds two spare screws and an extra side button.

Using the included screwdriver, you’ll need to unscrew the case, and keep an eye on the small screw. The case is made up of two different parts, an inner silicone cover and the hard outer shell. Wrap the silicone completely around the watch and then place the top part of the outer cover onto it. That will then snap onto the second part of the outer case attached to the strap.

This video shows the entire installation process and how to water test the case to make sure everything is secure and working properly. 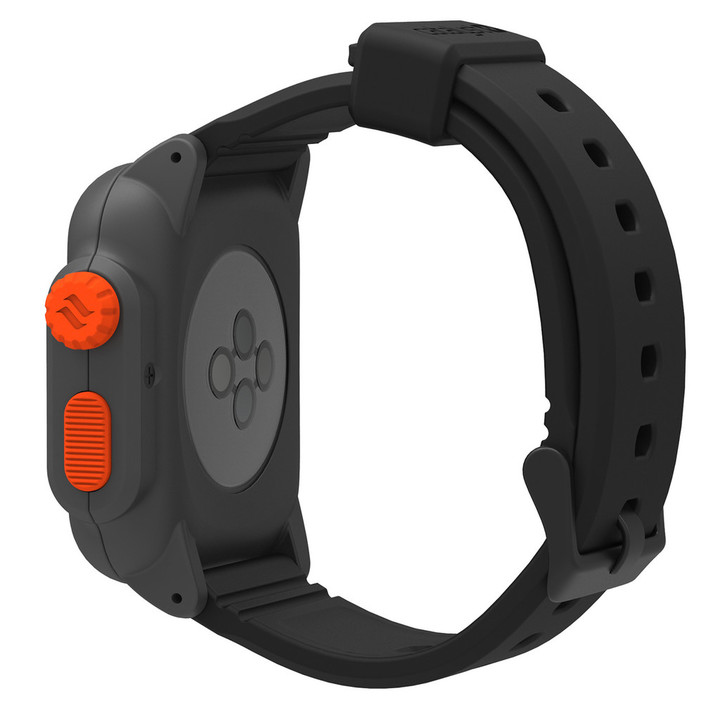 The case isn't particularly bulky and is comfortable to wear.

You can select from three different color options of the case. Along with the aptly named Green Pop, there is a Stealth Black and Resuce Ranger option that line up nicely with the color scheme of Catalyst’s waterproof iPhone cases. I tested out the all black version.

The add-on Digital Crown and side button of the case took at bit of time to get used to interacting with. They are both definitely more stiff than on the watch itself, but after a bit of trial and error, it wasn’t a huge problem at least for me.

Adding only 35 grams to the Apple Watch, I didn’t feel like the case was unusually bothersome. It obviously adds some bulk, but it didn’t bother me. The included band was very comfortable didn’t bother my skin like some other options I’ve tried.

During a recent trip to Florida, I was able to test out the case during a number of trips to the beach and came away impressed.

While I’ve never been particularly worried about wearing the watch in a pool, salt water is notorious for its corrosive qualities. But the case held up quite well and complexly protected the watch. I did get a bit of grime and sand stuck to the case after a long swim, but a quick wash under the tap cleaned everything nicely.

All three versions of the case retail for $59.99 and can be purchased now from Catalyst’s site. 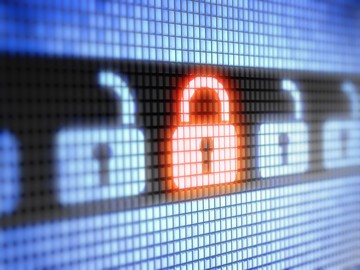