You are using an outdated browser. Please upgrade your browser to improve your experience.
by Abdel Ibrahim
September 13, 2016

With iPhone 7 reviews hitting the web, one of the main talking points has been Apple’s removal of the 3.5mm headphone jack. Many pundits think it’s just about going wireless, but there’s much more to it than that.

“Where’s my headphone jack?” says Walt Mossberg as he writes his review for Apple’s latest iPhone release, the iPhone 7. Every tech pundit out there is wondering why Apple would do such a thing. Why remove a port that’s been around for more than 100 years?

The answer everyone seems to be coming up with is “wireless.” Yes, it’s true, Apple wants to push us towards a wireless future where all our devices connect seamlessly and automatically. In fact, Jony Ive said it himself while narrating the video for Apple’s new AirPods:

We’re just at the beginning of a truly wireless future we’ve been working towards for many years, where technology enables the seamless and automatic connection between you and your devices.

But there’s another reason why Apple removed the 3.5mm headphone jack, and no, it’s not just because of courage. It’s because the next evolution of mobile hardware requires it.

Think about how far we’ve come in less than a decade. The mobile devices we carry around nearly 24 hours a day are capable of doing so much, from taking incredible photos to literally allowing us to communicate with people anywhere in the world. It’s quite amazing when you sit back and think about it.

But we’ve reached a point in the design process where something has to give if we want to see the next evolution take place. For Apple, that evolution is probably an edge-to-edge display with no Home button, something long-rumored. If Apple wants to accomplish this design, then they likely have no choice but to remove the headphone jack.

Before you erupt and say “but why does Apple need to have an edge-to-edge display?” The answer is simple: that’s the next step. It won’t just be Apple, either. Everyone else will follow. Look no further than in 2008 when Apple removed the CD-ROM from the MacBook Air. They saw what many didn’t see, and they knew that to take the next step in laptop computing the CD-ROM had to go. Today, none of us miss it, and we’re all happier our computers are super light and portable because of it.

If we want the next step in mobile computing to occur, some older technologies simply have to go. If you just take a moment and think about that, you’ll realize that getting upset about the 3.5mm headphone jack is ridiculous. Do you not want to move forward? Do you want our mobile devices always to be these ridged devices made of aluminum and metal that can’t flex or be thinner, lighter and more durable? That’s what they’ll be if we keep holding onto old technology for the sake of appeasing certain people.

The truth is simple: If you want to move forward. If you the future of cutting-edge design and user experience, certain things simply have to go. The headphone jack served us well for so long, but its time has come.

So, farewell headphone jack. You were great while you were around, but I’m ready for the future. Let’s go! 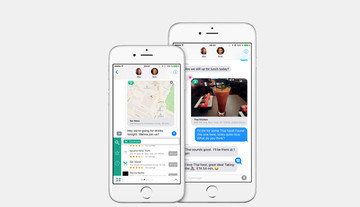 Search for Any Location Using Where To? for iMessage