You are using an outdated browser. Please upgrade your browser to improve your experience.
by Daniel Celeste
May 20, 2014 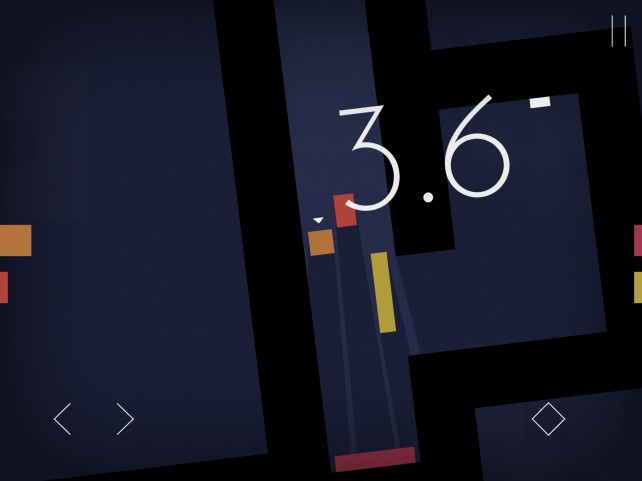 The formerly desktop-only platformer Thomas Was Alone by Bossa Studios has been made available for iPad, but comes with the hefty price tag of $8.99. For a game that comes from the creators of Surgeon Simulator and is an App Store Editors' Choice pick, is $8.99 too much to ask for? I once had the same question. 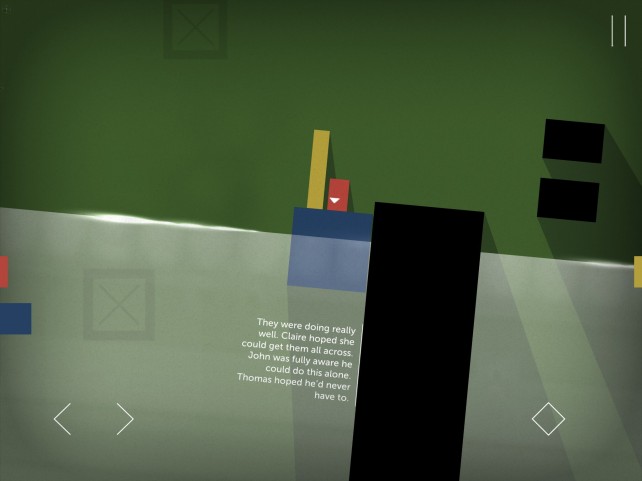 The way in which all of the characters in Thomas Was Alone must help each other in order to proceed makes the game challenging, enjoyable, and even humorous when combined with the narrated story. As you move each character left and right and jump from platform to platform, a deeper story begins to surface. It all begins when little red Thomas is alone in an unknown world, after the coders at Artificial Life Solutions began giving names to the Als as a joke. As more rectangles appear, the engaging narrator describes everything we need to know about them.

After Thomas, we meet Chris, the short and fat one who can barely jump but can fit into tight spaces. Next, there's the tall, lovable, and yellow John, who is a pro at jumping. We also run into Claire, the giantic blue square who can float on water, and Laura, the flat, pink quadrilateral who serves as a wonderful trampoline. These are only a few of the individuals who come to life in Thomas Was Alone, and I'll leave it up to you to discover more about them.

The narrated story in this game is powerful and comical enough to establish an emotional connection between the player and each character, making a group of four-sided shapes feel more like a lovable family. A lot like characters in a movie, you'll end up feeling sympathetic when they struggle, and will want to make sure that each shape makes it to the end of each level. I think it's reasonable to assume that only the most powerful game could make someone have feelings for a rectangle. The soothing soundtrack also helps.

Stepping back into the real world, it should be noted that, in version 1.0.1 of the game, which was released only hours after 1.0, the ability to play any level was removed. Now, players must play the story in order, which does make more sense, but at the same time, we believe that a user should be able to do whatever they want for the high price of the download. 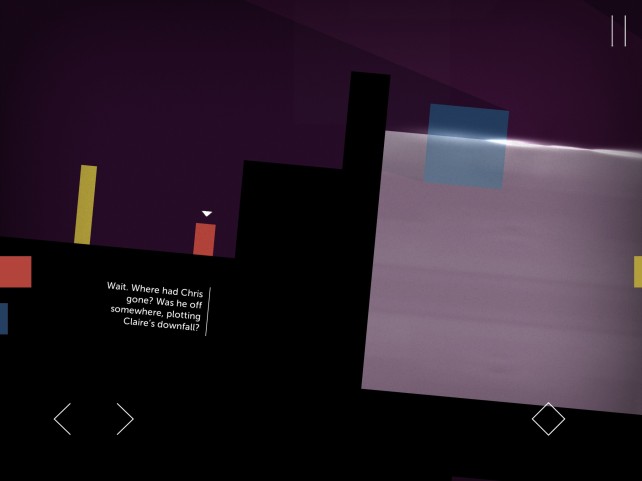 It's quite exciting when a breakthrough title — even if it is $8.99 — comes along that blows everything else away, redefining aspects of a particular category in the process. Thomas Was Alone is a prime example of this, making what looks like just another platformer an emotionally engaging experience with at least 12 hours of gameplay. Given this, along with the immense amount of work that must have gone into not only developing the game, but also writing and recording the screenplay, the price of Thomas Was Alone begins to make more sense.

You can find Thomas Was Alone for iPad on the App Store for $8.99. If you cringed at the price initially (which I first did), rest assured that this console-quality game is definitely worth those hard-earned dollars. 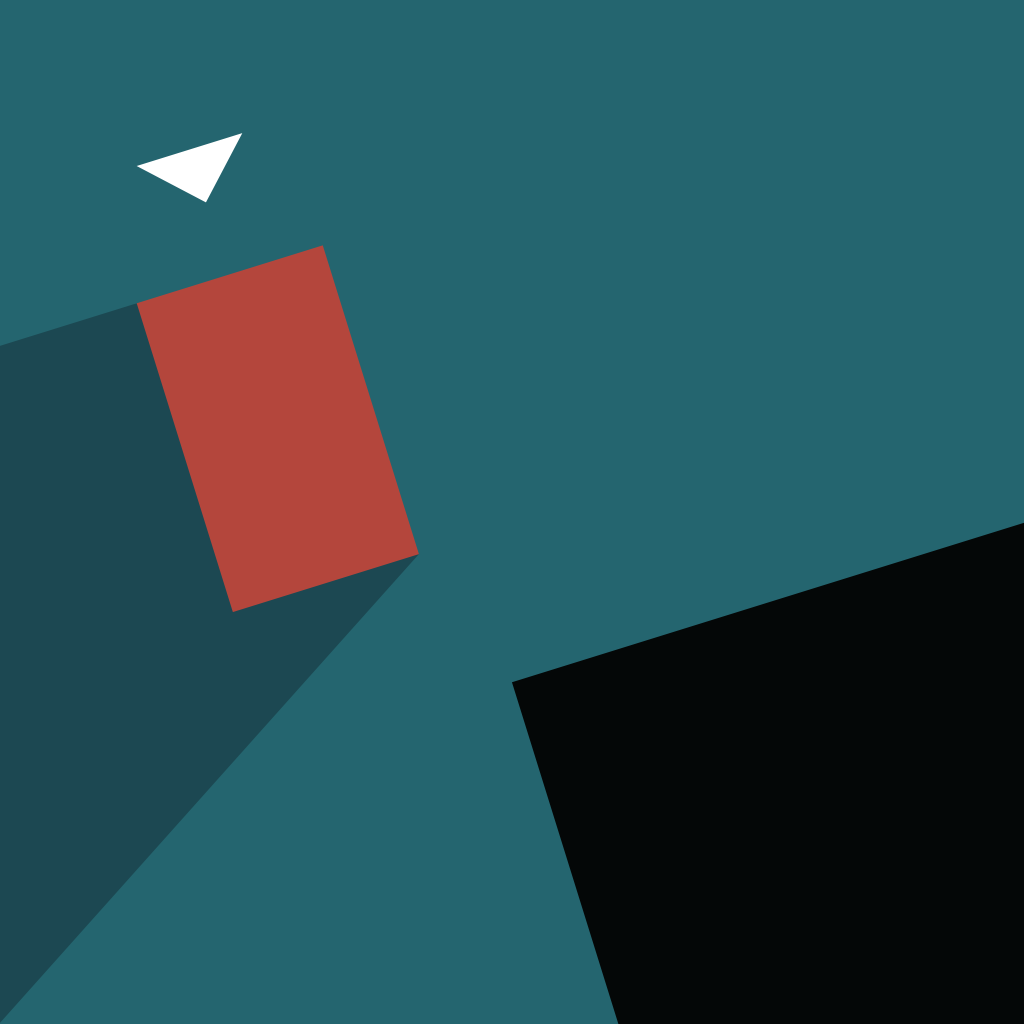 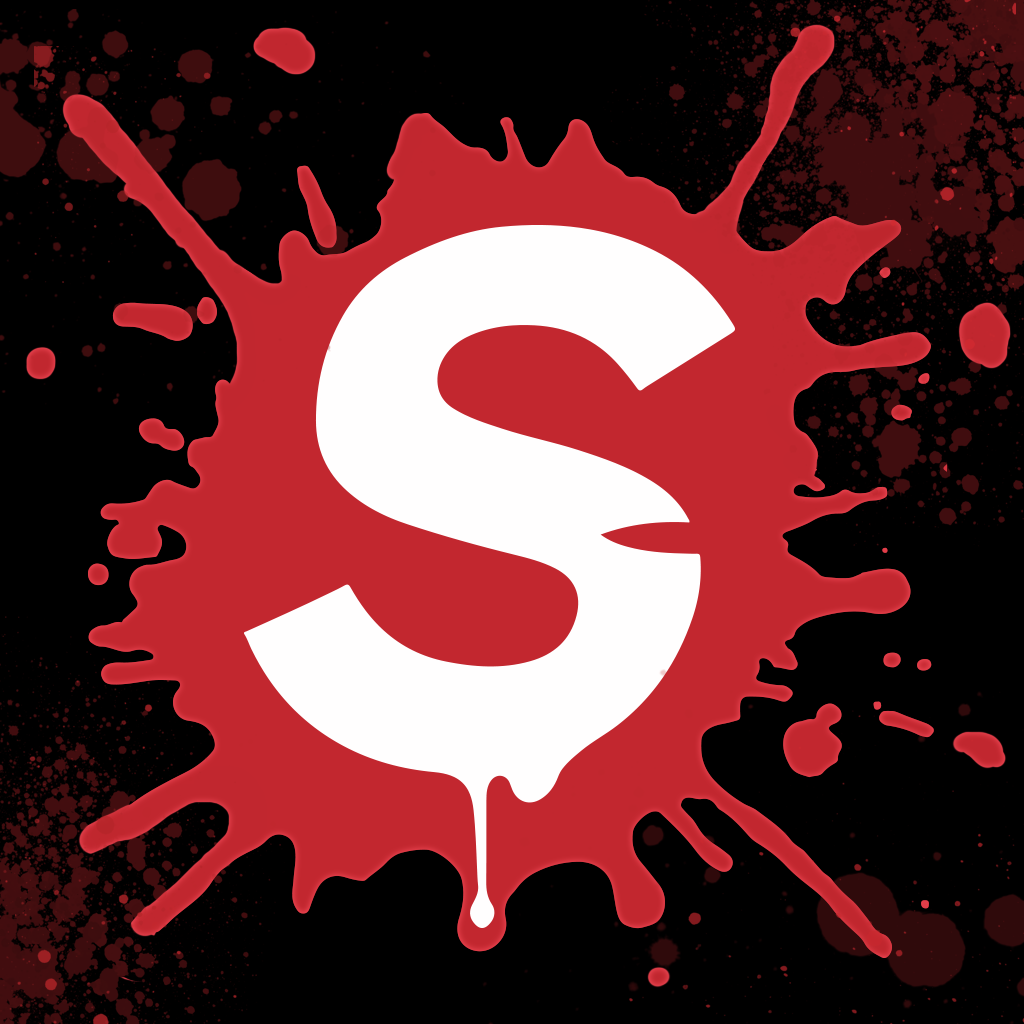 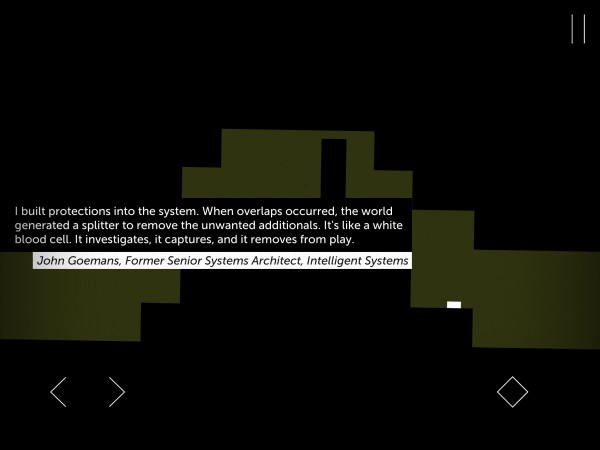 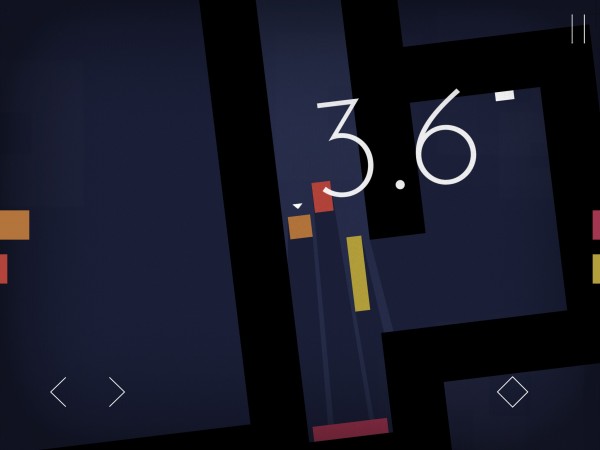 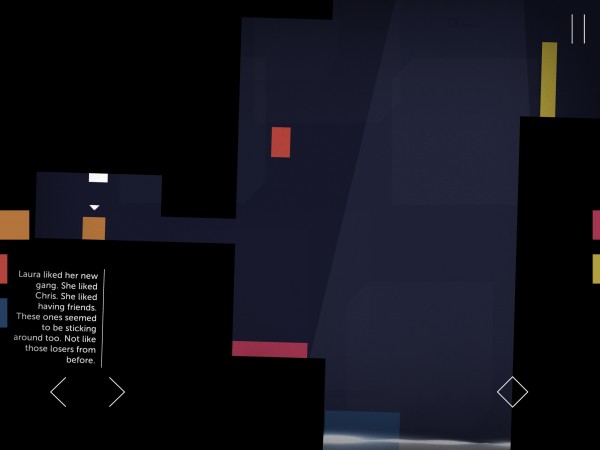 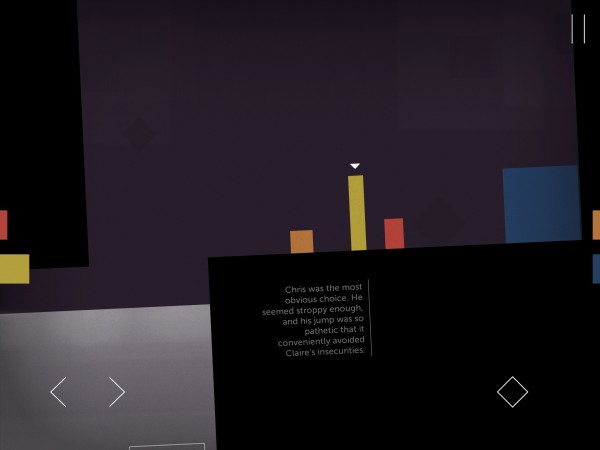 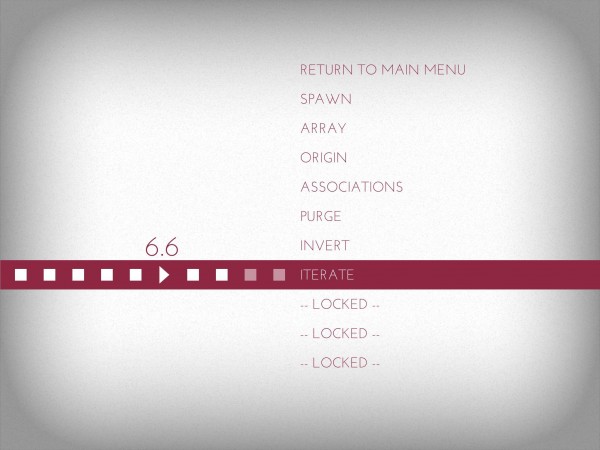 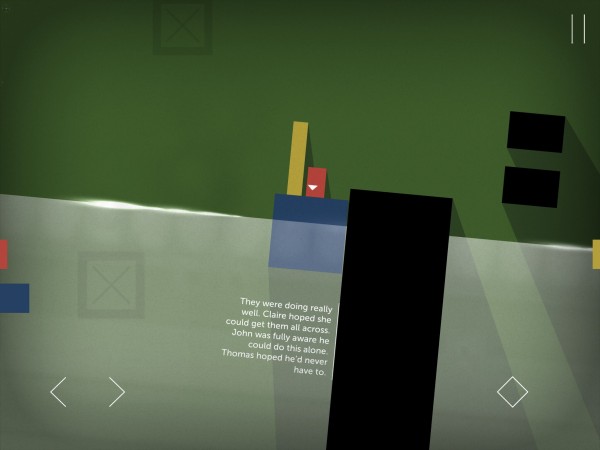 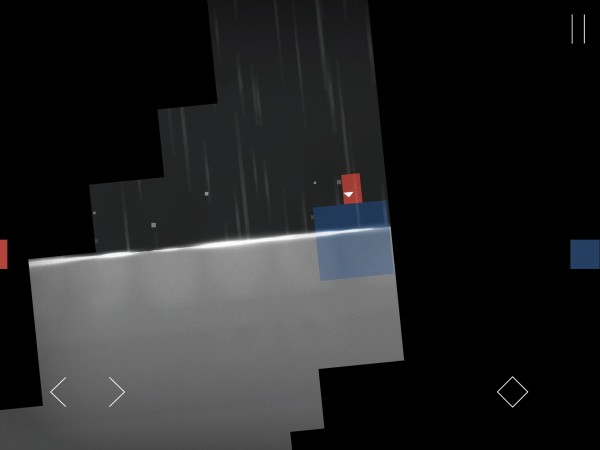 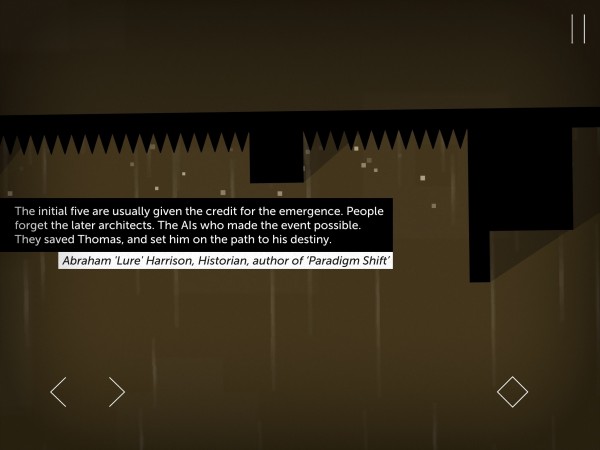 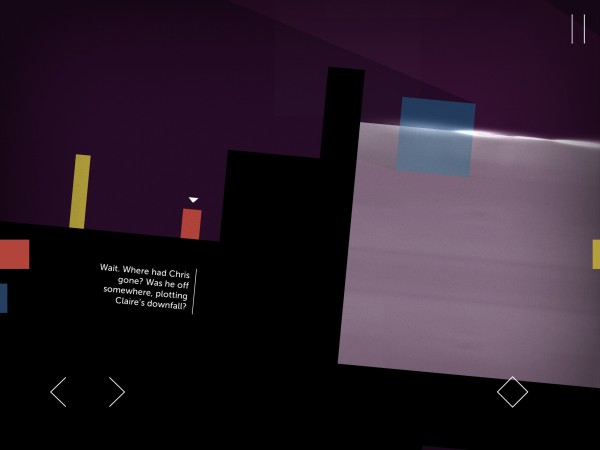