You are using an outdated browser. Please upgrade your browser to improve your experience.
by Christine Chan
September 1, 2016 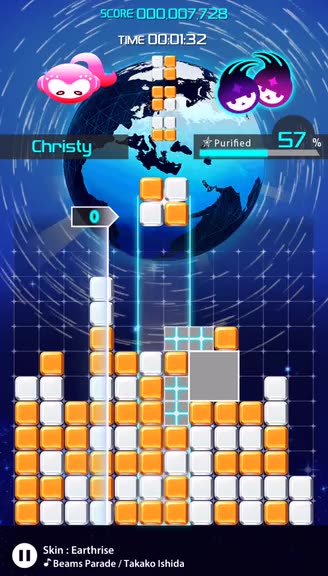 LUMINES PUZZLE & MUSIC ($2.99) by mobcast inc. is the new mobile version of the classic PSP title, and it’s been rebuilt from the ground up. If you were a fan of the original Lumines games, or just enjoy Tetris-like puzzle games, then this new Lumines title is a perfect fit for you.

As I was going through high school, I remember scrounging up whatever extra money I could spare from my retail job to save up for handheld video game systems, such as the Nintendo Game Boy Advance and Sony PlayStation Portable. I’ve been exposed to video games as a young kid, but my love for games bloomed after I met my boyfriend in high school, so I began to buy the games I’ve wanted to play since then. I remember getting my very first PSP in the early 2000s, not too long after the PSP originally came out. I’ve heard of Lumines back then but I don’t believe I picked up a copy since I got my PSP after the launch, but I remember playing Lumines Mobile (original release in 2006) back when I went through many different kinds of cell phones. I was definitely not the best at Lumines, but I always had a blast playing it because it reminds me of Tetris, except it’s much prettier and has fantastic music. Now, about 10 years later, Lumines is back on mobile as Lumines Puzzle & Music, and it’s better than ever before. 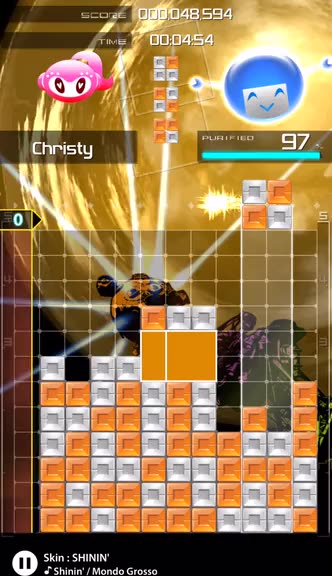 Visually speaking, Lumines Puzzle & Music is stunningly gorgeous. If you’ve played Lumines before, then you’ll feel right at home with the bright and vivid puzzle pieces (that change depending on skins), avatars, beautiful backdrops, crazy artwork for songs, and explosive, dynamic light effects that are hypnotic to watch. And if you’ve never played a Lumines title before, it may feel a little overwhelming at first, but you’ll instantly get hooked after a few rounds and watch the magic happen.

Not only does Lumines Puzzle & Music look great, it also has a great soundtrack to play to. Lumines has always been about the music, as well as the puzzle aspect, so you’ll find this title to be jam-packed with amazing dance tracks that are immersive and engaging. As you put the game pieces in their place and make matches, you’ll watch a mesmerizing harmony happen between the visuals and music, and every match plays a sound that goes along with the beat. The key behind being good at Lumines is to play along in a rhythm, so this will take some time and practice if you’ve never played before. Regardless, if you’re a fan of dance music, you’ll find yourself in heaven with Lumines Puzzle & Music.

The puzzles in Lumines are spread out across several different albums, and each album has three game modes: Easy, Normal, and Hard. However, as you start each album, only Easy is available — Normal and Hard must be unlocked by completing Easy first, and then Normal. While it doesn’t sound too difficult, each album is broken up into about three sections with two different skins each. After you complete or fail an album, you’ll see your completion percentage, which will be either 33, 66, or 100 percent. Because of this, it will take multiple attempts on a single album to complete it, so the longevity of the game does last a while. Depending on how you do in points, you can also earn up to five stars on an album. The game also has objectives that you’ll want to complete, because you’ll be rewarded with skins and even new avatars. The skins are essentially the sections and themes of an album that you can play separately by themselves, in case you don’t have the time to sit down and get through an entire album. 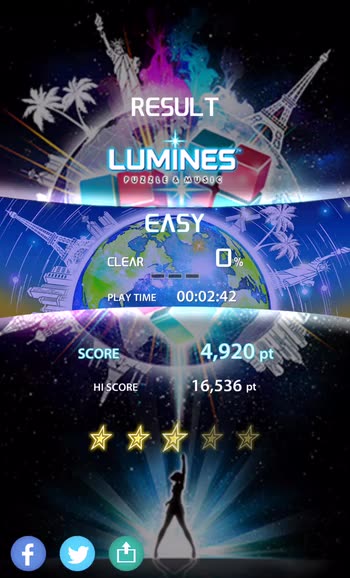 Controls in Lumines are pretty simple and intuitive. For each stage, you’ll have an empty grid. At the top of the screen, you’ll see a square that consists of four smaller tiles that are a mix of two colors in different patterns. Tap on the screen to rotate the block to position the tiles as you see fit, and drag your finger around to move the block horizontally. The column that the block would drop in will be highlighted, and you drag downwards to have it fall in place. In order to clear out the pieces, you’ll have to make matches of the same color in blocks of at least four. As the “scanner” line comes in from left-to-right, it checks for these matched blocks and will clear them out, causing the tiles on top of them to fall down, resulting in either a chain of combos or new possibilities for you.

While it sounds easy, the game mechanic has always been fairly challenging. The blocks will start to build up on the screen if you aren’t careful, and as you get further in the game, the pace speeds up, so things get more hectic and it’s harder to clear albums. But that’s part of the charm with the Lumines franchise, and it’s one of the biggest hooks that will keep you coming back — the challenge of beating your own scores, time and time again. And with the ability to unlock specific game boards, music, and even avatars for fun, the replay value of Lumines Puzzle & Music is indeed high.

I’ve only just started Puzzle & Music, but I’ve been waiting for this mobile version of the game for a long time now, and I’m not disappointed. The game has the usual flash and charm of the franchise, the dance tunes are catchy and delightful, and the controls are nicely optimized for touch screens. The albums are challenging, and with different game modes for all of them, there is a lot of reason to keep coming back to the same song — things just get harder but much more rewarding. It’s been a long wait for Lumines Puzzle & Music, but this game was worth the wait. 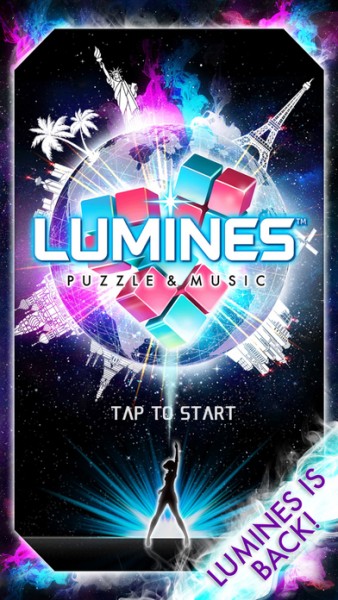 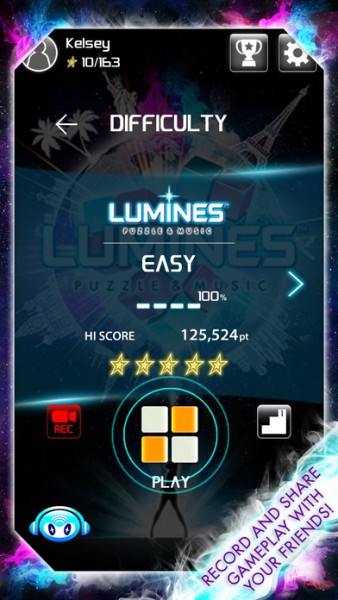 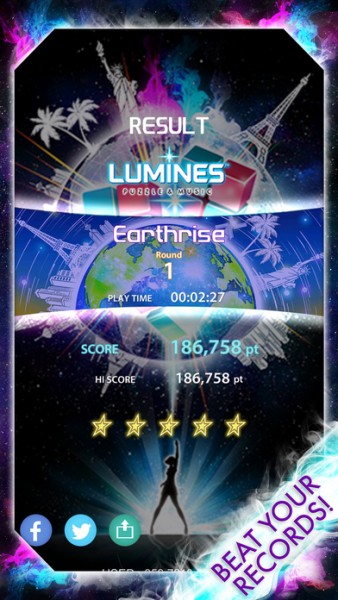 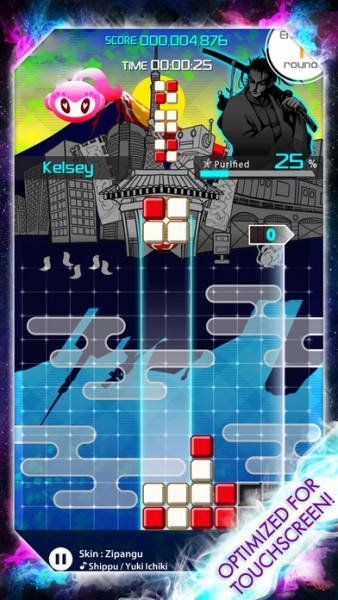 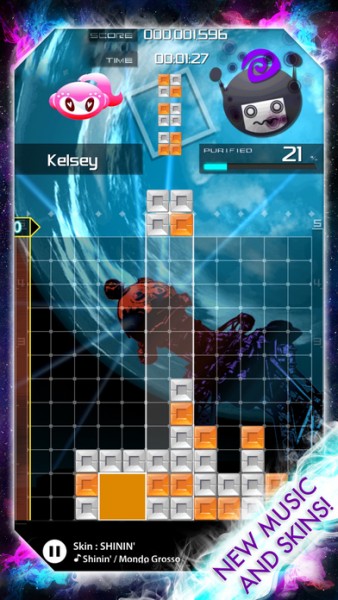 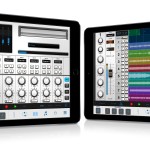 Immerse yourself in Deep Terror, a dark, eerie puzzler
Nothing found :(
Try something else