You are using an outdated browser. Please upgrade your browser to improve your experience.
by Christine Chan
April 4, 2017 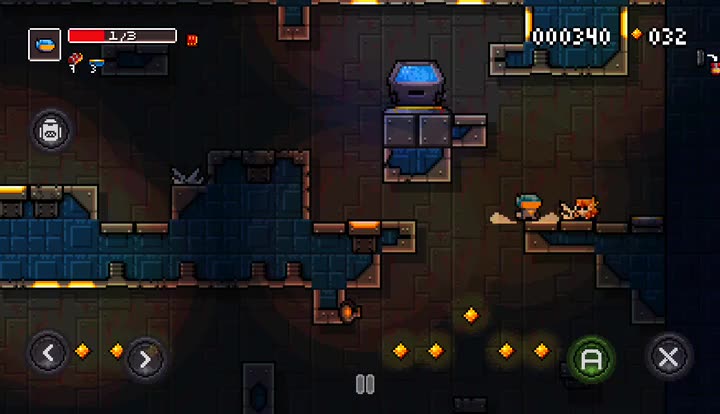 Meganoid(2017) ($4.99) by Pascal Bestebroer of OrangePixel fame is a tough-as-nails roguelike platformer that is essentially a modernized remake of the original classic Meganoid that came out nearly six years ago. If you are a fan of games like Star Knight and Le Parker: Sous Chef Extraordinaire, then Meganoid will be a good addition to your collection.

While much of my gaming time is spent on my Nintendo Switch these days, I like to take a break every now and then and return to my iPhone for some quality gaming time. Though my preferred cup of tea for iOS games are puzzles, I need some action packed titles when I have to de-stress. I find platformers to be a good choice for this, because they’re stimulating and also pack in a good amount of action if there are enemies robot enemies or the like involved somehow. Back when Meganoid first came out in 2011, I fell in love with the awesomeness of the game because it was one of the first few memorable action platformer games around. It got drowned out by later platformers, but I’m glad that it is making a return now in Meganoid(2017), though it’s a bit different than the original version. If you’re a fan of roguelike games and love platforming action, then this will not disappoint. 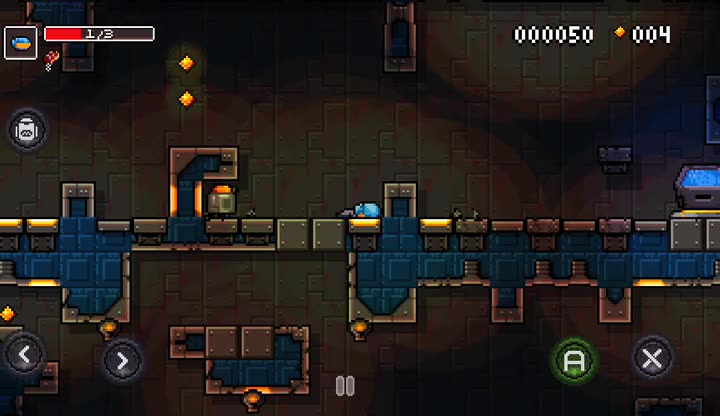 If you grew up with the old-school 16-bit games of yesteryear, then you’ll feel right at home with the visual style of Meganoid. The game is packed with high-quality 16-bit graphics that don’t leave any detail out, as the game features insanely detailed environments, textures, and even lighting effects. The colors used range from dark and gloomy tones to more bright and vibrant shades, and everything is easy to spot from a distance. Animations are smooth and fluid with no lag on my iPhone 7. In terms of music, the game has an atmospheric soundtrack in the background that just adds to the overall tone of the game, and the sound effects are fun and quirky. Like his other games, Meganoid(2017) follows in the retro pixel footsteps, and it works out well for this type of game.

Unlike the original Meganoid, this remade version is procedurally generated, so it will always be a different level layout each time you play. This means much more variety and unpredictability when starting a new run, but this does not appeal to everyone, so be warned. It is also a roguelike, so whatever progress you made previously in terms of progression and items is reset on each run. Personally, I like randomly generated roguelike games, so these don’t bother me, but I know it isn’t for everyone. There’s a basic plot in Meganoid(2017), and it involves a broken Meganoid space ship, and you’ve been called upon to fix it. The goal is to descend deep into the space ship to fix the problem (teleporter pads are your friends), but making sure you collect all of the loot along the way while eliminating foes like security drones that come after you if you are caught lingering around too long. It all sounds simple enough on the surface, but you will end up dying — a lot. You only get three lives to start with, but they go by rather quickly.

Controls in Meganoid(2017) are simple enough, but unfortunately feel rather clunky in practice. In the bottom left corner of the screen will be two directional buttons for moving your character left and right. On the other side, you have two buttons, X and A, for jumping and action, respectively. However, the size and placement of the buttons meant little forgiveness when it came to the touch zone for each button, so I ended up not going in the direction I wanted or I wouldn’t move at all, or I end up jumping instead of using an item. The game’s options let you change the size of the buttons between small and large, and you can change the positioning of the buttons. Despite this, I still felt that the controls were not as streamlined as they should be since the touch zones don’t change. 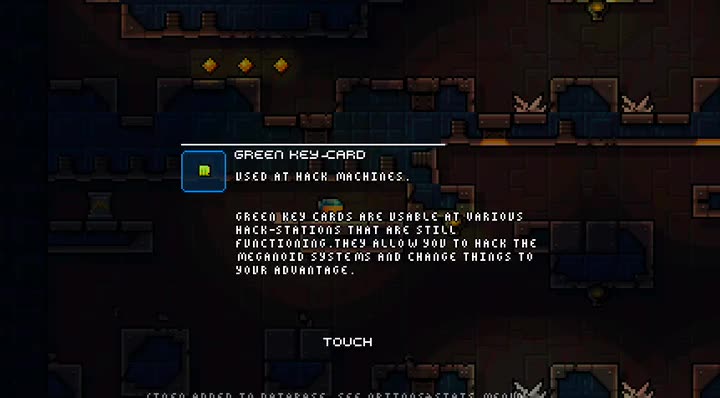 Meganoid has always been a tough game, but it seems the ante has been upped in this version. I have been dying a lot while just trying to get used to controls, and I have managed to blow myself up a few times with detonators as well. There are a ton of different items that you can find in the game, including hackable items, which can help you out a lot if you survive long enough to get some use out of them. To make things even more exciting, there are hidden areas that you can explore, so there’s plenty of reason to check every nook and cranny in this game rather than rushing to the teleporter pad. And each enemy you encounter will be logged, so you can read up on them to better prepare yourself on the next run.

I’ve only just started Meganoid, so I’m not very far, but the game is incredibly difficult so it will take some time to master. I love the vintage aesthetic because it takes me back to my childhood, and the music is well done. The roguelike and randomly generated levels may not be for everyone, but I do like that it keeps things fresh and interesting every time you play. The touch screen controls do need a bit more work before they feel streamlined for a touch interface, though, so hopefully that is coming sooner rather than later.

I do recommend Meganoid(2017) if you enjoy tough roguelike platformer games. You can find Meganoid(2017) on the App Store as a universal download for your iPhone and iPad for just $4.99. There are no in-app purchases. 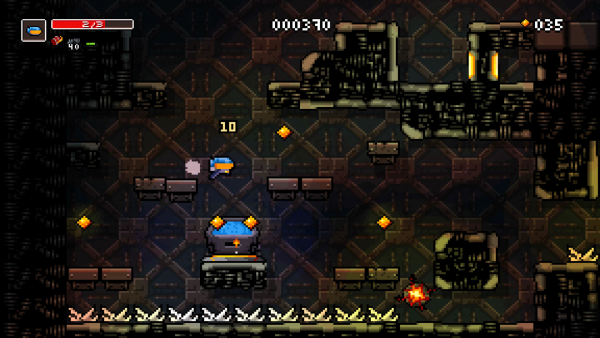 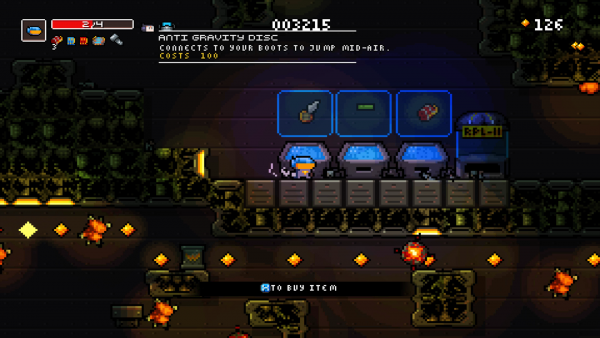 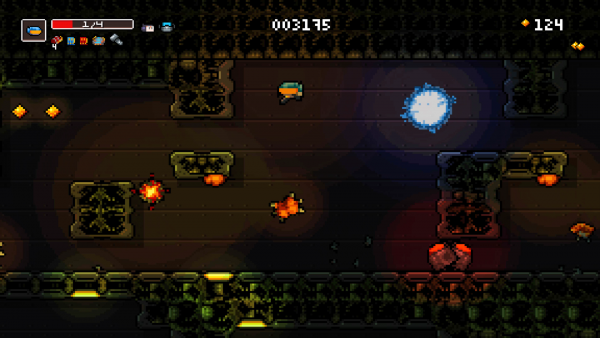 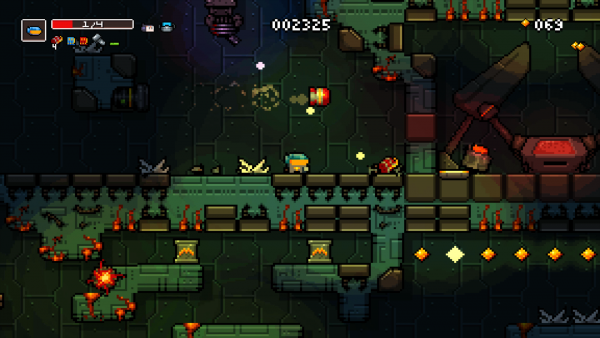 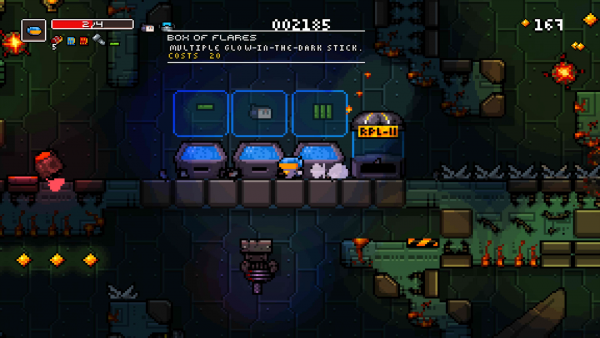 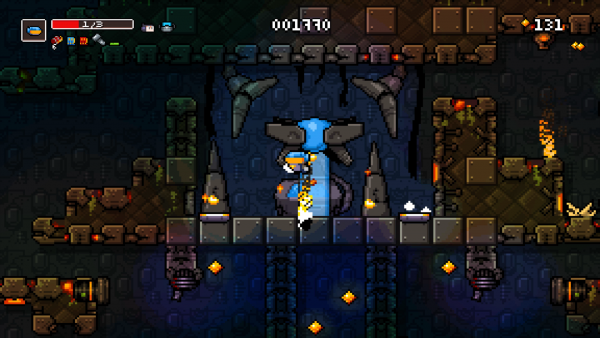 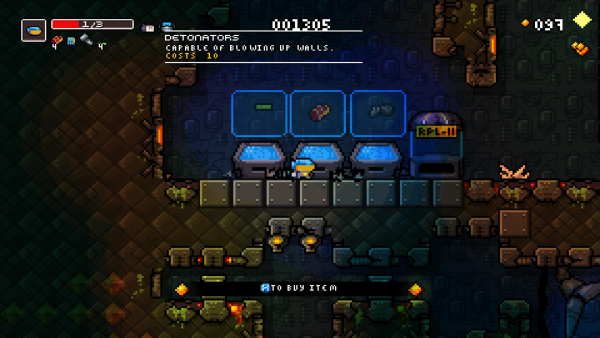 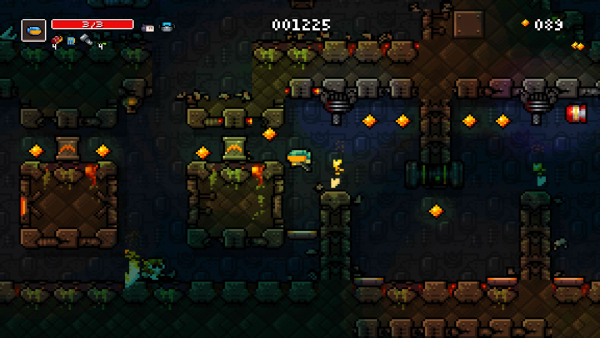 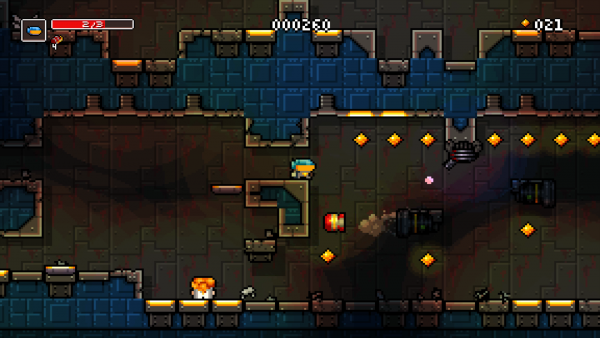 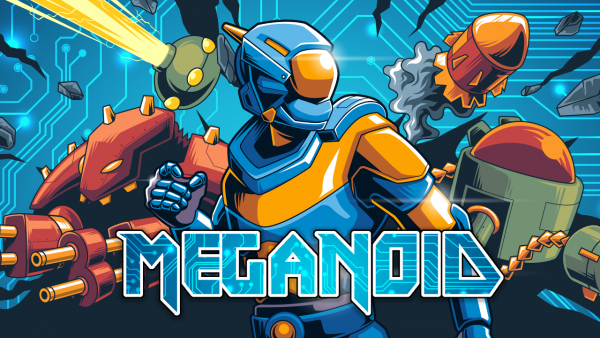