You are using an outdated browser. Please upgrade your browser to improve your experience.
by Christine Chan
October 15, 2013 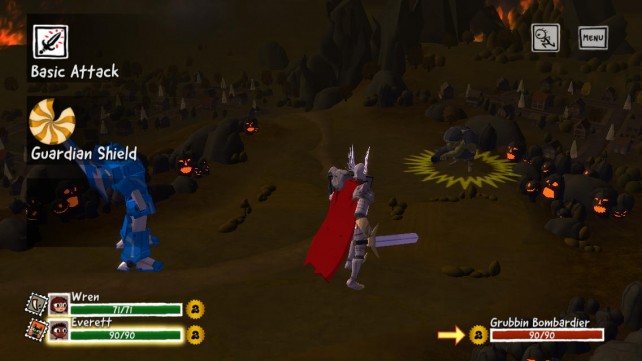 Costume Quest ($4.99) by Double Fine Productions, Inc. is a fun new take on your traditional role-playing game. If you’re a fan of adventure, and in the mood for something for the Halloween season, then this is a game you’ll want to check out.

I’ve been a fan of Double Fine ever since they released Middle Manager of Justice late last year, and I’ve been happy to see them porting some of their other games over as of late, including The Cave, which also earned our Game of the Week title last week. When I saw that they had a new game in the App Store, Costume Quest, I knew I had to give it a try, especially considering the time of year.

Like their other games, Costume Quest features humorous dialogue that you have come to expect from Double Fine Productions. I love unique stories and humor, which I believe adds a lot more personality to a game, so I was entertained and hooked from the get-go with Costume Quest. Plus, how could you resist playing as kids with magical costumes as they venture out on a quest to battle evil monsters on their usual trick-or-treating candy run? I mean, wasn’t this all of our dreams as a kid when Halloween came around? 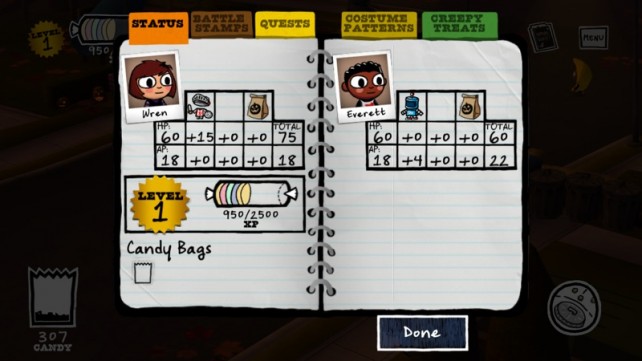 The graphics in Costume Quest are rendered in 3-D and are quite beautiful to look at, despite the very cartoonish feel. The character models all have smooth animations without much choppiness, and the music in the game is quite eerie, which is fitting. The only thing that bothered me was the dialogue boxes — it is a bit on the small side, and I wish that it would move to the next piece of text when I tap on the screen, as it currently takes a few seconds before I can go forward. There is an option to skip the text entirely, but as I’m a fan of Double Fine’s humor, I didn’t want to miss out on anything.

Costume Quest starts out with you choosing who will be the “leader” of two siblings as they venture out to the neighborhood to trick-or-treat. As you journey out, things seem normal as you begin going from house-to-house, until you find a monster in a house and they end up mistaking your sibling for a giant, edible piece of candy corn. Then you find out that your costumes have special powers, and it’s up to you to gather other brave kids from the block and go out to save your sibling together.

Your character (either Wren or Reynold) will be able to find costume pieces scattered throughout the neighborhood in what appear to be magical coffin chests. You can access your guidebook to view the materials needed for costumes, view your current quest list, see what Battle Stamps you have, and more. Each costume that you craft will also be unique itself, as each costume has a special ability that can be activated through a tap of a button on the bottom right of the screen.

Unfortunately, the controls were the biggest problem I encountered while playing Costume Quest. In order to move your character around, you can either tap the spot you want them to go to, or keep your finger on the screen in the direction you want them to move to make them keep walking. You can interact with the environment, such as pail bashing to find candy or talking with NPC units or opening chests, by tapping on the object in question. You will also end up with more than one kid in your party over time, and you can tap on them to change costumes at any given moment.

However, when you combine all of these touch-to-do-this controls, you end up tapping on the wrong thing at times and your hand may be blocking your view of where you’re going, especially on the iPhone’s smaller screen. I really wish that this had a kind of D-pad or digital joystick for movement, as it would eliminate at least half of the problems I’m having. 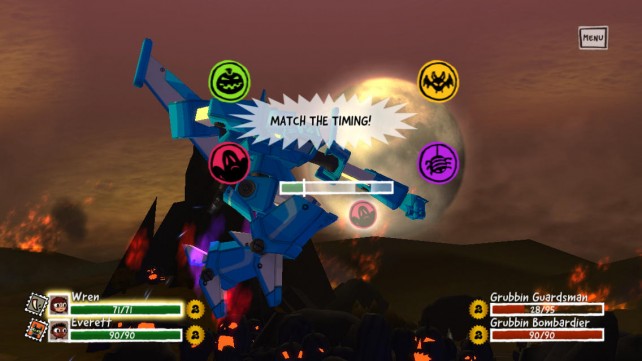 I’ve only gotten a small taste of how battle goes in the game, as I’m currently working on many side quests. The costumes will transform the children (up to three other kids can be in your party at a time) into the monsters and creatures that they are dressed up as, and they will have special abilities that come from their current costumes. Battle is turn based, and players can select what action to take, which then needs them to hit a Quick Time Event at the correct moment for maximum amounts of damage.

However, according to some reviews in the App Store, it seems that they have changed the battle a bit from the original version on Xbox Live Arcade, PlayStation Network, and Steam versions. The difference between the iOS version with the originals is the fact that the placement of these event buttons are randomized, and you only have about two seconds to recognize it and get it right. In the original versions of the game, these event buttons remained static in place.

In addition to adventure and battle, Costume Quest features mini-games that you can play once you interact with the appropriate NPCs or objects, such as apple bobbing. The candy that you end up collecting from all over the neighborhood is used to purchase Battle Stamps and other items to help you in the heat of battle, which you can find from the neighborhood merchant kid. There is also Game Center support for 15 achievements, so there is replay value in the game.

I’m enjoying the everything about this game — visuals, music, quirky and charming use of imagination, and the great Double Fine humor — but I cannot get over the controls. I really hope that the developers can add an alternative method of moving around in this game, because I cannot stand the tap-to-move or tap-and-hold-to-keep-moving thing, as it is very obstructive to what I see on the screen, and it is a terrible mix when you have to tap other things to interact with them.

I’ll still be playing this (how can I say no to a Halloween game), but I can’t fully recommend it until the controls are fixed, unless you can pick it up on another platform. You can find Costume Quest in the App Store as a universal download for $4.99. It is also available in the Mac App Store for $14.99. 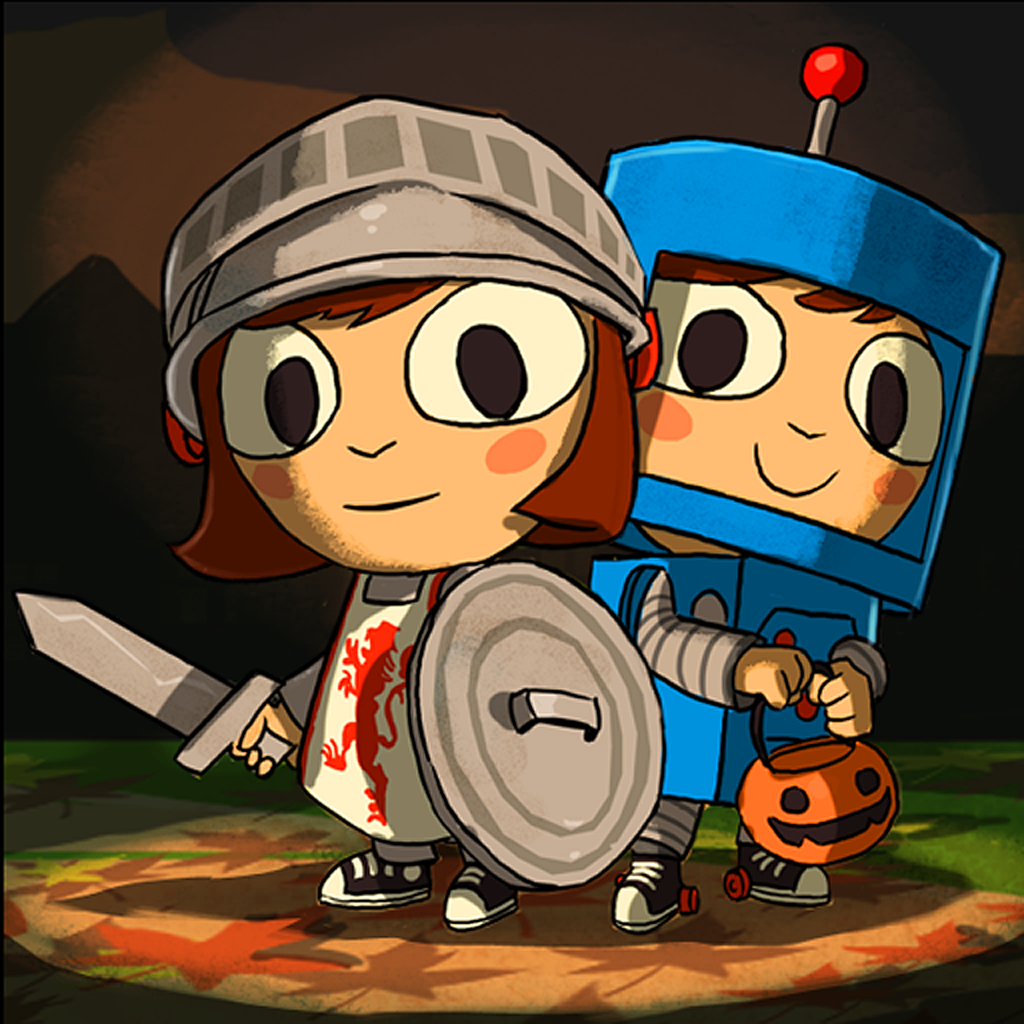 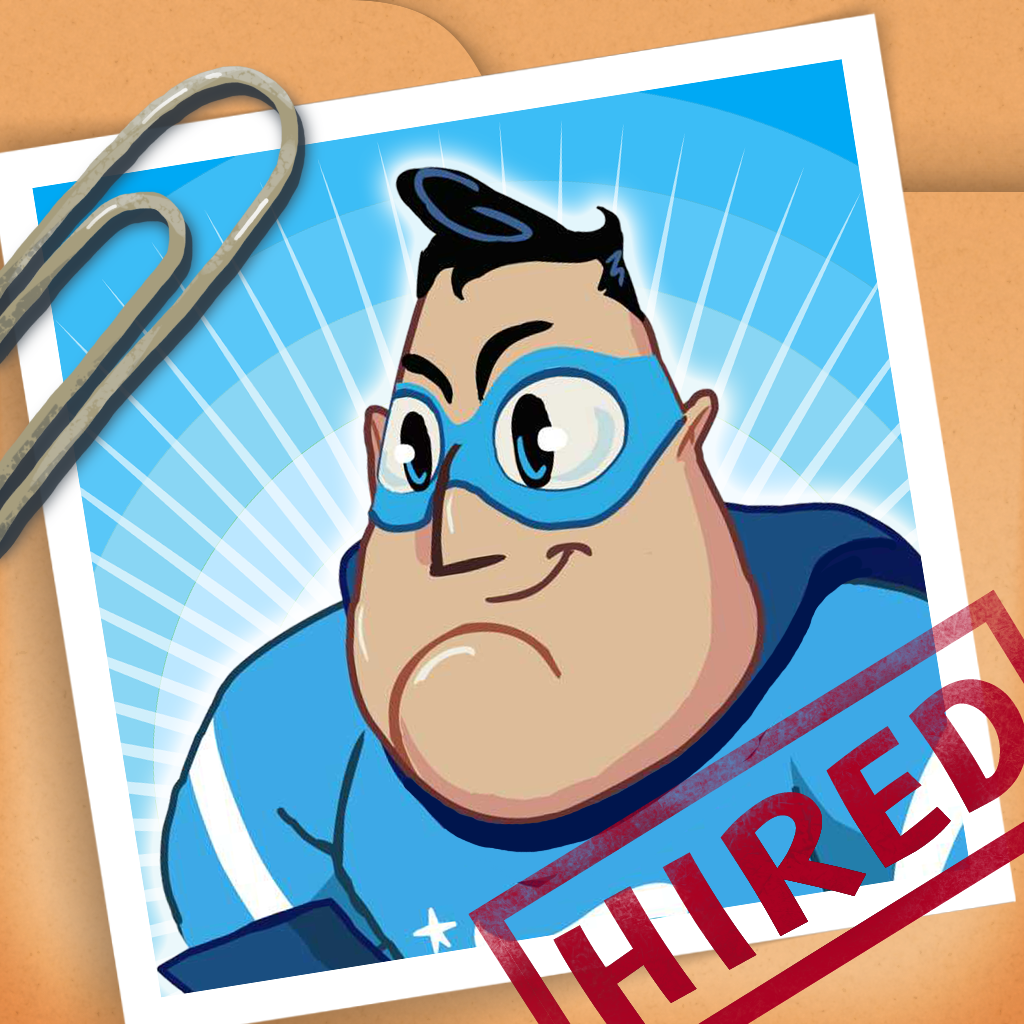 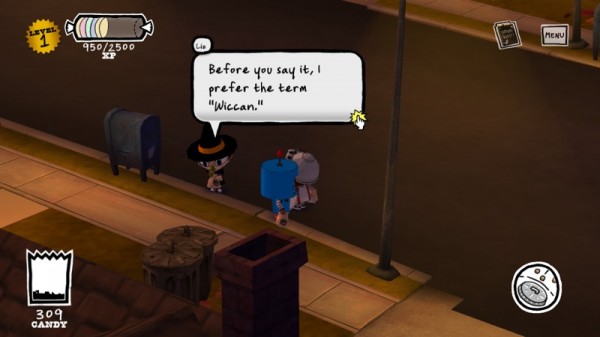 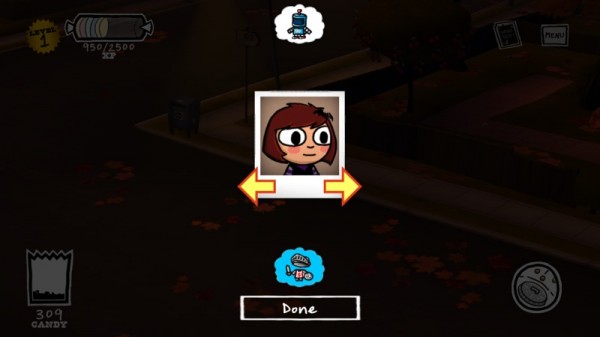 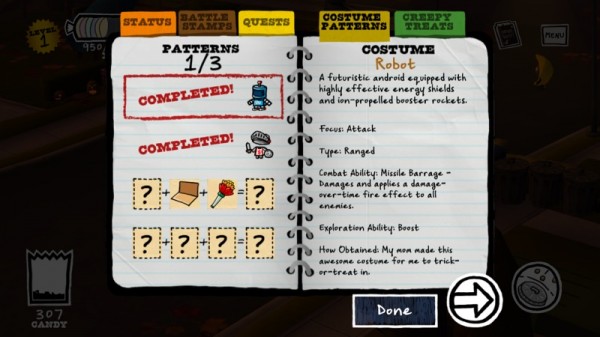 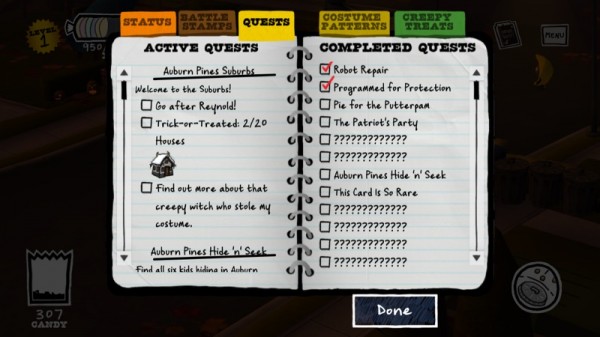 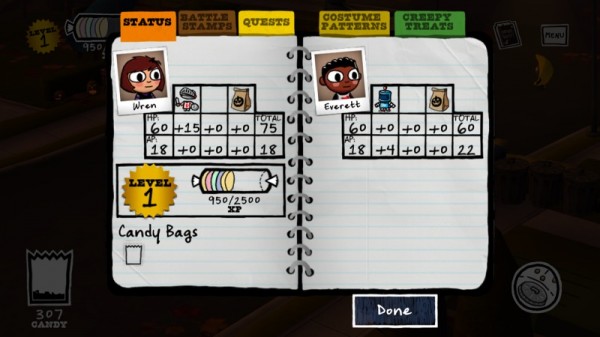 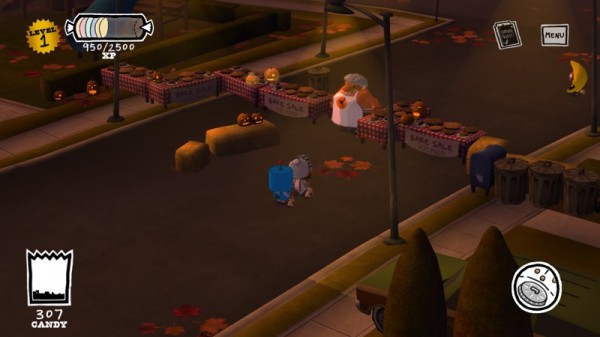 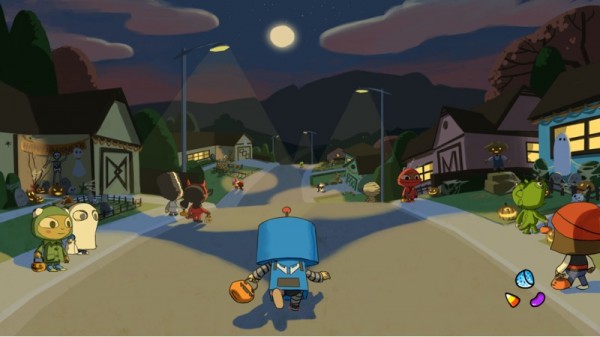 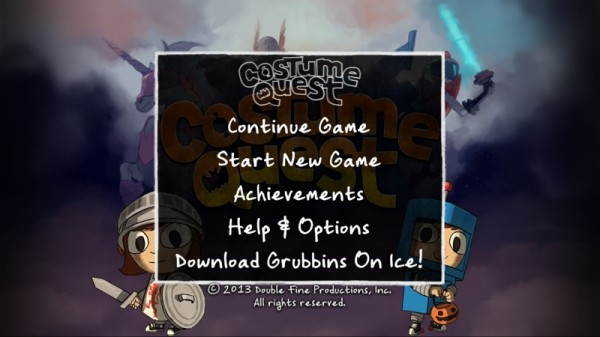 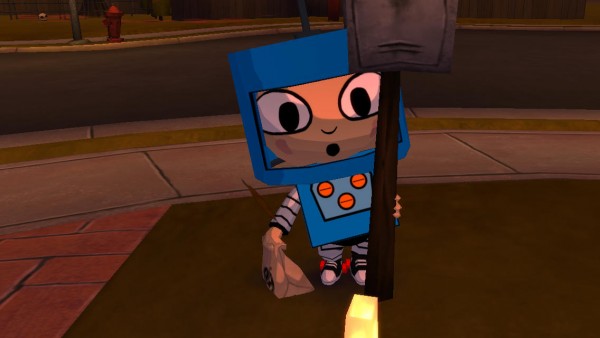 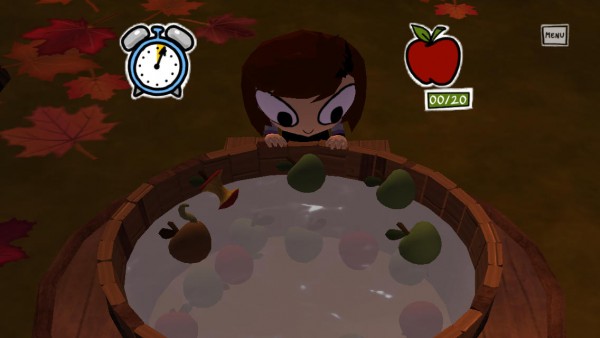 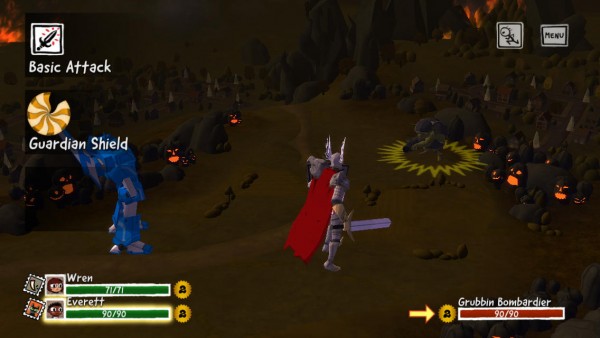 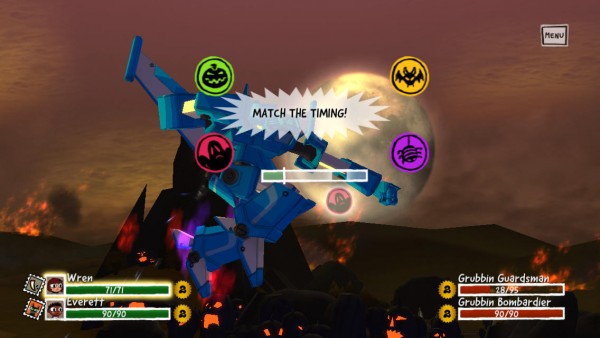 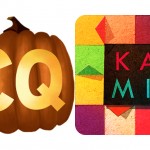 Match-3 Strategy Gaming Gets Supercharged In Marvel Puzzle Quest: Dark Reign
Nothing found :(
Try something else