You are using an outdated browser. Please upgrade your browser to improve your experience.
by Christine Chan
August 11, 2016 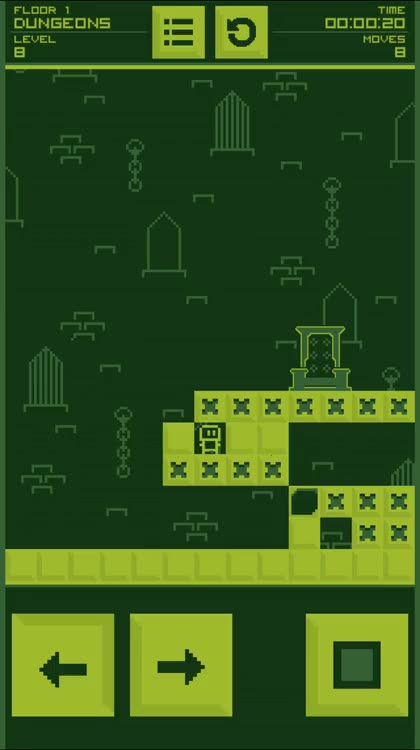 To The Throne ($1.99) by Raredrop Games Ltd is a retro-inspired minimalist puzzle game that is full of royal challenges. If you like games that make you think and are full of charm, then To The Throne is definitely one that you should be picking up this week.

Since I grew up as a ‘90s kid, one of the things that I always carried around with me was my Game Boy handheld system. Those things were durable, ran on easy-to-replace disposable batteries, and gave me hours of entertainment every day as I played whatever games were available to me at the time. So even with all the advances in modern video game graphics, I will always have a place in my heart for the classic retro pixel art style and even the monotonous green color palettes before the colored Game Boys arrived. Of course, when I saw To The Throne on the App Store, I knew I had to check it out because it looks like a total blast from the past (like the recent Blitz Breaker) that I always welcome, and it’s a puzzle game — seriously, how can I resist? 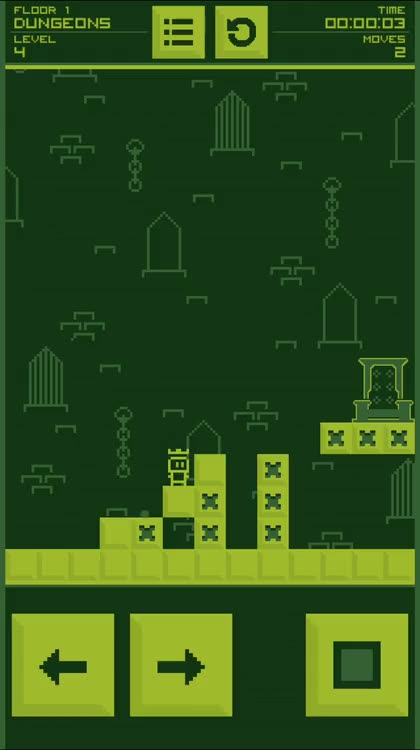 Visuals in To The Throne are completely vintage and delightful, taking me back to my childhood. The game features super simple pixel art designs that make you feel like you’re in the ‘90s again, but are still detailed enough to be modern. The color palette of bright and deep, dark greens screams retro, though it is a bit bolder than what I remember from the golden days of gaming. There are also different designs in the background that represent the areas that you’ll be going through as you help guide a young king to his true throne. To top everything off, To The Throne has an awesome medieval chiptune soundtrack that is an absolute treat to listen to, so I recommend getting your earbuds for this game. Raredrop Games did a great job in recreating the classic Game Boy-esque style into a challenging puzzle game.

Since To The Throne falls into the puzzle game category, it is level-based as you’d expect from the genre. At the moment, there are 52 stages spread out across six different areas. To The Throne tells the story of a young king, King Kingsly, who must overcome difficult trials in order to earn the right to his true throne with the help of his royal advisor, Bitsworth. The game starts out simple enough, but as you advance through the puzzles, you’ll find that things get pretty tricky as you go.

The objective in each stage is to reach the throne, as well as collect any pieces of the shattered Royal Emblem that you come across. However, getting to the throne is difficult, as it is usually perched up on some unmovable blocks (the X indicates this). However, King Kingsly can pick up other blocks and move them to a different spot to create pathways to the throne. To move or turn left or right, just tap on the directional buttons in the bottom left section of the screen. To pick up a block, tap on the button in the bottom right corner. When Bitsworth speaks, you can continue the dialogue (he gives you some tips) by tapping on the speech bubble button, or skip it with the decline button.

While it sounds easy enough (you’re just picking up and moving blocks), it’s not always what it seems. You start with white blocks that can be picked up and then just put down right in front of you, even if there is nothing underneath (magical floating blocks). But then you’ll find black blocks that are not able to be placed in midair, clear blocks, and much more. As each new type of block is introduced, you’ll have to tinker around with it before you can figure out how to solve the puzzle. It forces you to think carefully and plan out your moves, because who knows? Some blocks may only be used once, or something along those lines. 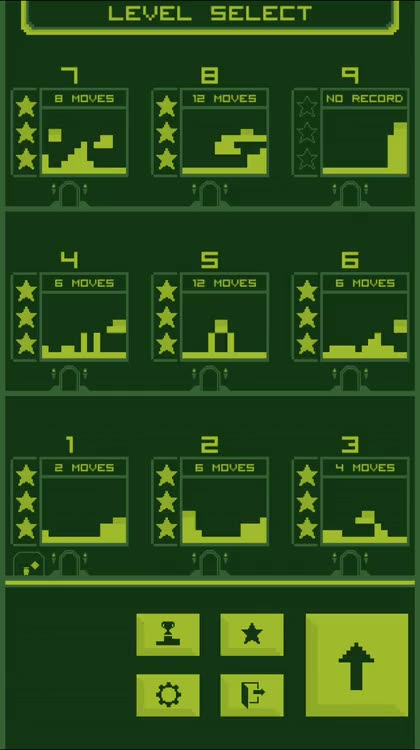 To make things even more of a challenge, each level will show a timer at the top as well as how many moves you’ve made so far. In this game, moves only includes the number of times you’ve interacted with blocks, not when you just move your character left or right. When you complete the stage, you will be awarded up to three stars depending on how many moves you made — the fewer the better. You can also strive to solve a level as fast as possible, or use as few moves as possible, since these are two separate factors in the final score. The puzzles can be solved through trial-and-error, and there is a good amount of replay value since you will want to improve your time or use fewer moves than before. I recommend taking your time on the first attempt to learn the solution, then just do it quicker the next time around.

My only issue with the game so far is the fact that the timer starts counting down as soon as you see the next stage. Personally, I don’t think this is fair and the timer should countdown after you start moving the King around. But I suppose with the timer starting as soon as the level loads, it makes you act quickly and not just sit around.

While I’m still pretty early on in To The Throne, I’m enjoying it so far. The visuals are great, though the colors are a bit more vibrant than actual Game Boy tones, the medieval chiptunes are rad, and the controls are simple to pick up but difficult to master, of course. My only qualm with the game is the immediate startup of the timer, so maybe the developer can change that in the future. But other than that, I love the challenge that To The Throne offers.

I recommend checking out To The Throne if you’re a fan of retro-inspired puzzle games that are a great homage to the days of the Game Boy. To The Throne is on the iPhone App Store for just $1.99. There are no in-app purchases.

To The Throne
Raredrop Games Ltd
$2.99 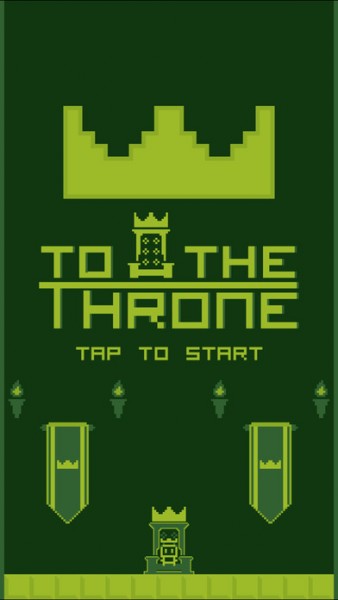 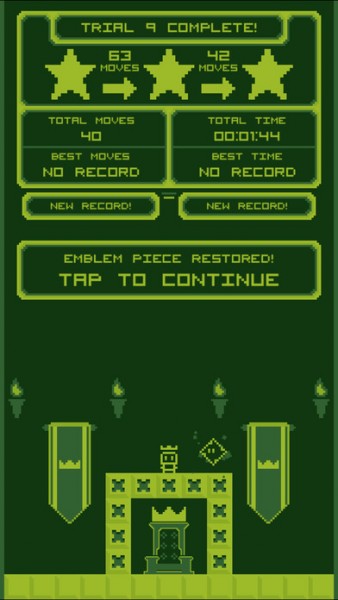 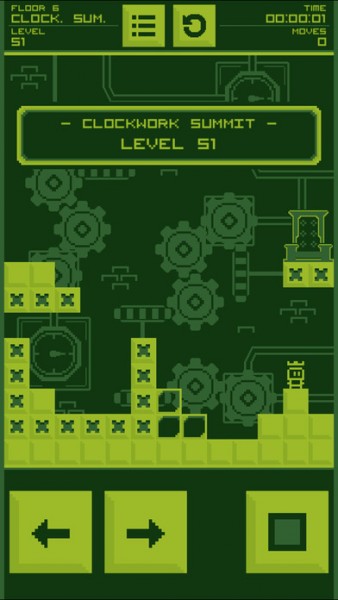 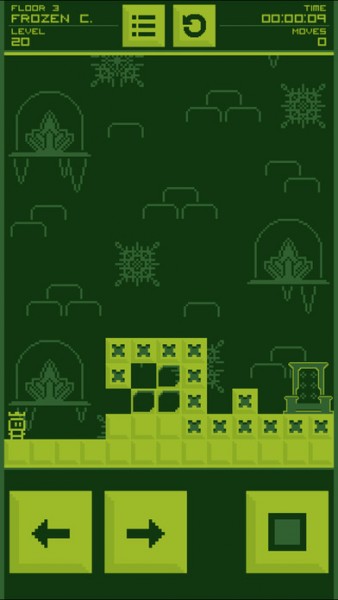 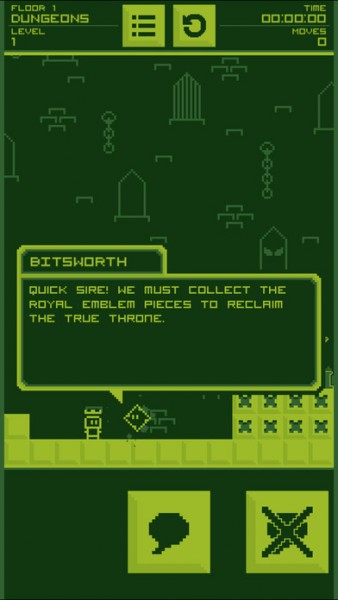 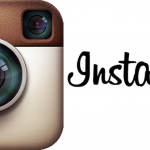 Instagram is even better with these 7 apps
Nothing found :(
Try something else