You are using an outdated browser. Please upgrade your browser to improve your experience.
by Christine Chan
April 14, 2017 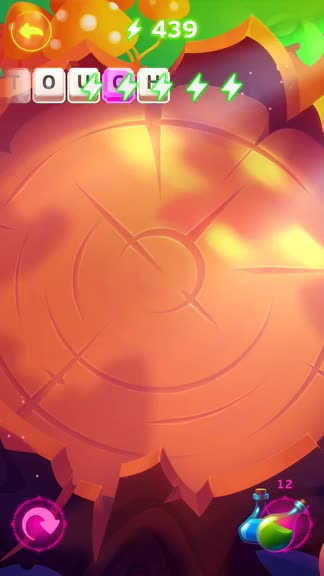 Under a Spell (Free) by Happymagenta UAB is an educational word game that will appeal to any linguist out there who is seeking a challenge. If you’re a fan of games like Spelltower, TypeShift, and Alpha Omega, then you’re in for a real treat with Under a Spell.

I’ve been under a bit of stress these days, but I am able to calm down by spending time with my boyfriend or playing video games, but a lot of the time it’s a mix of both since we’re both gamers. I’ve mentioned it a lot here at AppAdvice, but one of my favorite game genres on iOS are puzzles, especially when it involves words. This is because I write for a living, of course, and I enjoy expanding and putting my vocabulary to use. While I’ve tried plenty of word games on my iPhone in recent years, I’m always looking out for new ones that have their own unique spin on the genre, and Under a Spell is rather captivating. It’s also a bit different from the developer’s other offerings, which include classics like Tomb of the Mask and Into the Dim. However, after playing Under a Spell, it’s definitely a hit that will not disappoint. 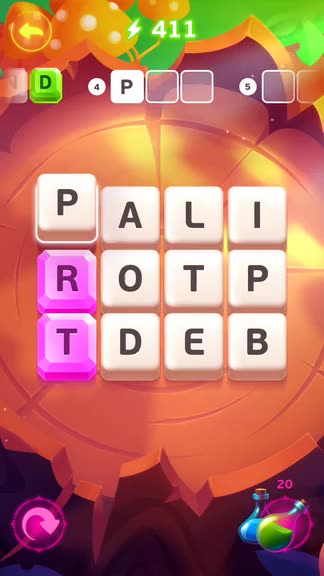 Visually speaking, Under a Spell features super polished graphics that look stunning on Retina screens. It has a rather cartoonish art style to everything, but I thought that it adds a nice and refreshing touch to your typical word game fare. And Under a Spell also packs in an incredible amount of detail, from the book cover that contains the world map of levels, the drawings to represent each chapter, the letter tiles themselves, and even the transitions between stages — Happymagenta didn’t leave any stone unturned in terms of graphical attributes in this game. Under a Spell also has a bright and vibrant color palette that is sure to be eye-catching, and all animations are buttery smooth and fluid, so I had no issues with lag on my iPhone 7. In the background is a soothing atmospheric soundtrack that even has some nature sounds, which are bound to help you relax and focus on solving the word puzzles in Under a Spell. Needless to say, I think Happymagenta did a standup job with the visual and audio design of Under a Spell, making it stand out above the rest.

Under a Spell is a bit different from most word games, instead following the suit of traditional puzzle games. Players will find a book that has a map spread out across several pages, and the number represents the chapter, which has about 10 levels each. In each stage, the letter tiles are arranged differently, and will even contain numerous layers stacked on top of one another. To clear a level, players have to find a certain number of words contained in the mix of tiles, but there are specific words that you need to find, and the game does not tell you what they are, so you have to discover them on your own through trial-and-error. The game does give you some hints, though, such as the number of letters that the word contains, and if there are any special colored tiles in the word, you’ll see them in the clue area. Under a Spell starts off easy enough, but things do get more challenging once you get to the further levels, as new game elements, such as frozen and bomb tiles, begin to appear, as well as more tile layers and complex words.

Playing Under a Spell is rather simple thanks to the intuitive and responsive controls. Like other word games, you can only spell out words with tiles that are adjacent to each other, and this can be done horizontally, vertically, and diagonally. To spell words, you can either swipe across the ones you want to pick with your finger, or just tap on them one-at-a-time. Honestly, I found it to be more accurate if you tap, because sometimes the swipe would pick the wrong letter instead, leading to some frustrating moments. If the word you spell is correct, the game proceeds to the next word; if it’s wrong, nothing happens and you just try again. Sometimes you may get the right word, but in the wrong order — if that’s the case, the game lets you know and tells you to reset from that point. 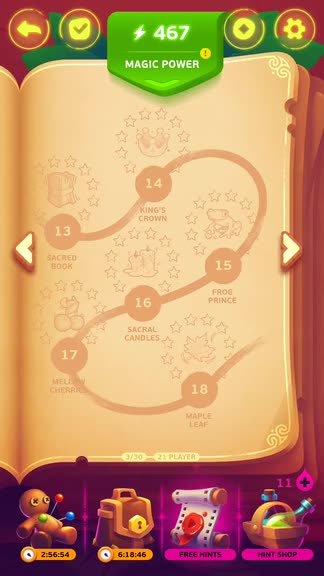 The coolest thing about Under a Spell is the fact that the game dictionary is rather vast, as there’s a specially designed AI that has picked up on many words from books, movies, and other forms of media throughout time. Because of this, you can even learn some new terms here and there, and the game is also multilingual. What the multilingual part means is the fact that you earn a higher score if you play the game in different languages, and the more languages you do, the better. Your score is indicated by the “Magic Power” number at the top of the screen, which increases each time you spell a correct word. If you’re stuck, you can always use a hint (bottom right corner) to reveal a letter of the word that you are currently on.

To keep things fresh and interesting, Under a Spell also has a mission system, where you can earn rewards by completing goals, such as scoring a certain number of points, reaching a specific level, and more. There is also a Daily Puzzle Challenge that gives you a new puzzle to solve each day, and you can compete with other players for the best completion time. And for hints, the game is rather generous, giving players free gifts every couple of hours, or you can get more by watching ads. There is also an in-game slot machine that is another way to earn prizes, and you get one daily spin. If you desire more, you can get a 10 daily spin subscription for $9.99 a month, though I think the price point for that is a bit high, but hey, if that’s what you want, then it’s there.

For what it’s worth, Under a Spell is a great word game that I have been finding to be highly enjoyable. I love the exquisite graphics, the music is superb, and the fact that you must look for specific words that are unknown to you from the get-go makes things challenging. I’ve gone through my fair share of word games, but Under a Spell truly stands out from the rest due to the vast dictionary and multilingual support giving you an incentive to try other languages and learn something new.

I recommend giving Under a Spell a try if you’re into word games and want to expand your own vocabulary while having some fun. You can find Under a Spell on the App Store as a universal download for your iPhone and iPad for free. There are in-app purchases for more hints and a daily spin subscription.

Under a Spell
Happymagenta UAB
$2.99

Into the Dim
Happymagenta UAB 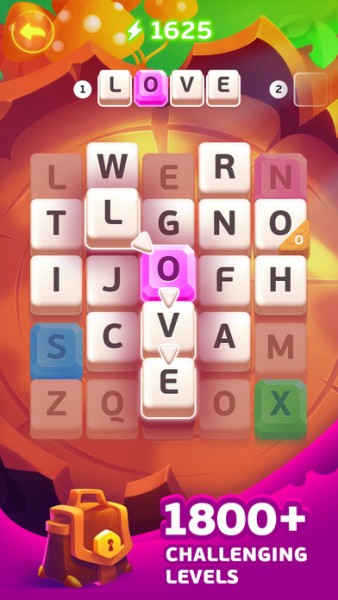 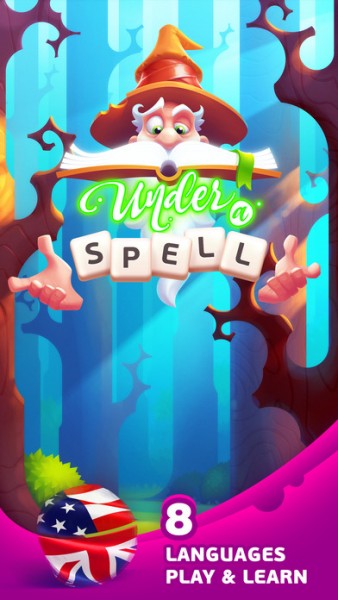 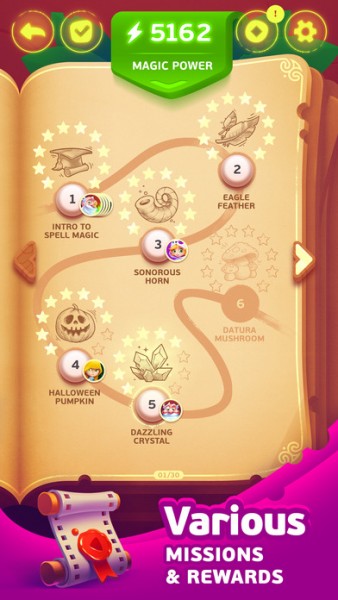 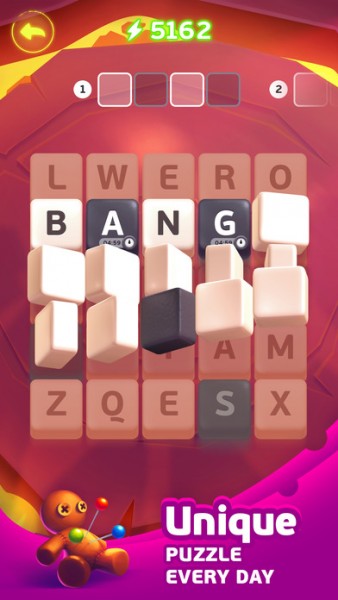 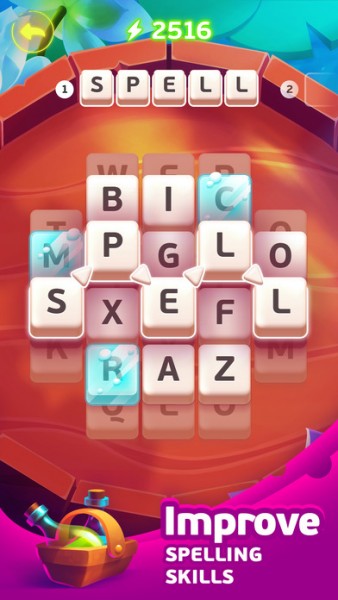 Can you arrange the letters right to complete Word One?
Nothing found :(
Try something else