You are using an outdated browser. Please upgrade your browser to improve your experience.
by Joe White
September 30, 2010
The guys over at iFixit have explored the insides of the new Apple TV. And, they've already managed to discover some interesting information about Apple's recently released device. Apple TV comes with 8 GB of internal storage. This is something Apple failed to promote prior to the release of the device. Obviously, this was due to the fact that the company's set top box focuses mainly on streaming media, as opposed to storing it. Any users who are considering an Apple TV jailbreak will be glad to hear this. As MacRumors reports, 8 GB of internal storage means jailbroken Apple TV sets will be able to store a large number of apps. The device houses 256 MB of RAM. As many of you know, this is the same as the iPad and iPod touch 4G, but less than the iPhone 4's 512 MB. We'll be posting if any more significant information becomes available. In the meantime, be sure to let us know if you've got a new Apple TV in the comments below! 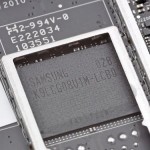