You are using an outdated browser. Please upgrade your browser to improve your experience.
by Joe White
October 1, 2010
Not long ago we told you Apple TV could be jailbroken using the SHAtter exploit. Yesterday, we heard that the device can be restored in iTunes, which meant the race to jailbreak Apple TV could begin. Now, 9to5Mac has just noted that an Apple TV jailbreak has been achieved, by none other than MuscleNerd himself. Speaking from his Twitter account, the prominent Dev-Team member stated:

AppleTV 2G SHAttered and jailbroken (not quite sure how to run apps yet!)

He also attached the above screenshot to the tweet. As you can see, this Apple TV jailbreak isn't ready to go mainstream yet. Nor can it run apps. But, it won't be long until MuscleNerd and the rest of the Dev-Team manage to put together a public release. Seeing is believing, so we've embedded a YouTube video showing off the jailbroken device below:

Impressive, right? If you think you might jailbreak your Apple TV device, let us know in the comments below! And, we'll keep you posted on this new jailbreak saga as more information becomes available. 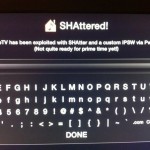 Apple TV Jailbreak Has Been Achieved!

Apple TV Jailbreak Has Been Achieved!
Nothing found :(
Try something else