You are using an outdated browser. Please upgrade your browser to improve your experience.
by Casey Tschida
January 13, 2011
With iOS 4.3 being released to developers earlier today, we've had a bit of a chance to play around with it. One thing we found is that second generation iPod touch and iPhone 3G users are no longer admitted to the party. So, iOS 4.3 beta 1 isn't available for second generation iPod touch and iPhone 3G installation, but what does that mean? Quite frankly, it may not mean much. Apple provides notes for developers, areas that Apple would like them to focus on in testing and development. Well, iOS 4.3 beta 1 noted that AirPrint was the dominant component of attention. Let's take a look at this. AirPrint requires an iPad, iPhone 3GS, iPhone 4, 3G iPod touch, or 4G iPod touch. AirPlay and Game Center require an iPad, iPhone 3GS, iPhone 4, 2G iPod touch, 3G iPod touch, or 4G iPod touch. General multitasking an iPad, iPhone 3GS, iPhone 4, 3G iPod touch, and 4G iPod touch. So, two of the three dismiss the 2G iPod touch and all dismiss the 3G, however, AirPlay and Game Center are important features. Currently, older iDevices get to enter the realm but aren't allowed access to everything the iOS playground has to offer. Take it as at least a warning that the second generation iPod touch and iPhone 3G are nearing the full "end of life" designation. Only time will tell for certain. As both devices are from 2008, and in extremely accelerating product branches, can you really be furious with Apple? On top of that, no company claims a product will last forever, they primarily guarantee it will do what they say it will do when you purchase it. To all of those iPhone 3G and 2G iPod touch owners out there, are you going to upgrade or just use your iDevice with as many bells and whistles as it can handle? 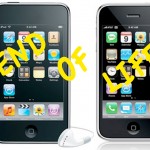 iPhone 3G And iPod Touch (2nd Gen) Owners, You Are Now Dead To Apple
Nothing found :(
Try something else