You are using an outdated browser. Please upgrade your browser to improve your experience.
by Joe White
April 27, 2011
The "locationgate" saga has been going on for a while now, and the news of Apple's Orwellian desire has even made its way into the hands of the mainstream press - at least over here, in the UK. If you've been looking for a way to safely access the location data on your iOS device since hearing the news, read on - because we have an interesting link for you. Here it is: http://markolson.github.com/js-sqlite-map-thing/. Simply head over to the link (preferably in Google Chrome), and point the service over to your most recent backup file. The website will then access the location data stored on your iOS device, plotting a graph of your recent movements. Importantly, the website states: "No data is sent to any server, anywhere. All data remains on your computer." For me, looking at the above map (which was produced when I hooked my iPhone 4 up to the website) kind of makes this whole affair seem a little more "real." It's odd - I can trace every group of dots to a recent memory. Looking at the map, I'm thinking - "Oh, that's the time we visited Liverpool," and "Ah yes, the time we went to see Les Miserables in London," and so on. Of course, the effect is somewhat diminished by the fact that the UK isn't that big a country - if you've owned an iPhone for a few years and live in America, I can imagine the map produced by the website could very well be astonishing. However, I suppose the important thing about this hidden feature or software bug (depending on which stance you're taking) is that somebody else can access this data, too. At this point, things change - and the reality of the situation sinks in: There shouldn't be a feature like this on iOS devices - this feature needs to go. I said yesterday that I'm waiting for Apple to provide its fans with some sort of explanation. Steve Jobs recently stated (in an email) that Apple doesn't track iOS device owners. Then yesterday, we heard that an uncovered patent outlines an actual use for all of this stored data - that the data would serve to benefit Apple and other companies, too. This would suggest that, since iOS 4, Apple has been purposely tracking users - and was planning on putting the data to use either privately, in a future version of the iOS, or both. We'll keep you posted on the status of the "locationgate." You can can also stay up to date by specifically following our tag archive on the subject. And, if you have an opinion on the matter, be sure to let us know your thoughts in the comments. 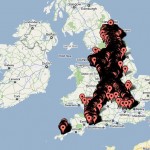 Use This Website To Access Your Stored Location Data, Then See How You Feel
Nothing found :(
Try something else