You are using an outdated browser. Please upgrade your browser to improve your experience.
by Joe White
May 19, 2011
Apple's famous "Back to School" promotion, which offers Mac-buying students a free iPod touch, will likely begin again soon. Specifically, this year's promotion could launch as early as next week, and will reportedly offer students a rebate when purchasing a new iPod alongside a Mac computer. The news comes from Cult of Mac, who speculates that the launch of the promotion could tie in with the 10th anniversary of the Apple Store (and the "mysterious" events Apple appears to have planned for this weekend). In the past, Apple has offered students a rebate when purchasing a qualifying Mac and iPod together. Previously, these "qualifying" Macs have been the MacBook, MacBook Pro, MacBook Air, iMac or Mac Pro, and the iPod has specifically been an eight gigabyte iPod touch (which currently retails online for $229). Furthermore, it has previously been possible to use the rebate against a different iPod, or even an higher-end iPod touch. We'll keep you posted. In the meantime, if you're a student planning on purchasing a new Mac, hold off until Apple's Back to School promotion launches! 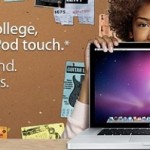 Apple's Back To School Promotion Coming Soon, Free iPod Touch Anyone?
Nothing found :(
Try something else