You are using an outdated browser. Please upgrade your browser to improve your experience.
by Joe White
May 11, 2011
The "other Steve" in the tech industry - that is, Microsoft CEO Steve Ballmer - has promised Apple fans that support for Skype for Mac and Skype for iPhone will continue to be provided. Yesterday, we told you about Microsoft's acquisition of Skype, which cost the Windows Wizards a whopping $8.5 billion. Following our post, the deal was confirmed via a Microsoft press release, too. However, many - including myself - were worried about the Mac and iOS versions of Skype. Namely, would support for this branch of the service's software be abandoned, in light of the acquisition? According to Steve Ballmer, this is not the case. As reported by Macworld:

“A, I said it and I meant it,” said Ballmer when a reporter asked for assurances that Skype would continue to be available for operating systems and devices not sold by Microsoft. “B, we’re one of the few companies with a track record of doing this,” he added, citing Microsoft’s work on Mac OS X, where it develops and sells a Mac-specific version of its Office suite.

Of course, this is a fair point: Microsoft develops for Mac OS X, offering its popular Office suite for Apple fans. However, it's also true that Skype isn't yet available on Windows Phone 7 smart phones or Windows 7 tablets, suggesting that the company will probably pursue this goal ahead of anything else. In other words, despite Ballmer's assurances, Skype for iPad is probably a long way away. Do you have an opinion on Microsoft's acquisition of Skype? Feel free to post it in the comments below. 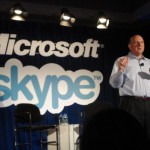 Steve Ballmer: Skype For Mac & iOS Will Still Be Supported

Steve Ballmer: Skype For Mac & iOS Will Still Be Supported
Nothing found :(
Try something else