You are using an outdated browser. Please upgrade your browser to improve your experience.
by Joe White
June 14, 2011
According to a recent article, Apple's annual "Back to School" promotion could launch this Wednesday. However, instead of offering Mac-buying students a free iPod touch (or money off another model), this year, Apple will reportedly offer a $100 iTunes Gift Card. The news comes from 9to5Mac, in an article that hit the Web recently. According to the website:

Apple will start their annual Back to School promotion this week, possibly Wednesday, but this year will feature a major twist. In year’s past, Apple’s Back to School promotion offered students their usual educational discount plus a free iPod with any purchase of a Mac. This year, 9to5Mac has been told, will be very different. In fact, Apple will not be offering free iPods during this promotion but will instead offer a $100 iTunes gift card.

Apple's fifth generation iPhone handset is rumored to be announced in September, at the company's annual music event. Usually, the company's new line of iPods take center stage here. However, we have heard that a "perfected" iPod line could result in Apple's mobile music devices being pushed to one side (or even barely "refreshed" at all). 9to5Mac speculates that this could have something to do with the lack of an iPod giveaway as part of the company's "Back to School" promotion. With an expected start date of tomorrow, you don't have long to wait until we'll know all the details of Apple's "special offer" for students. In the meantime, let us know your thoughts in the comments. 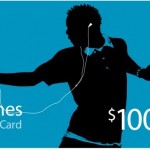 Back To School Promotion Starts This Wednesday - No iPod, $100 Gift Card Instead

Back To School Promotion Starts This Wednesday - No iPod, $100 Gift Card Instead
Nothing found :(
Try something else