You are using an outdated browser. Please upgrade your browser to improve your experience.
by Joe White
June 12, 2011
Apple's "over-the-air" software update feature in iOS 5 could force updates on users, according to a recent Twitter post by Will Strafach (of the recently launched @ChronicWire). Apple announced over-the-air software updates as an iOS 5 feature, at the company's WWDC keynote presentation (as part of creating "PC free" iOS devices). While we had previously speculated that over-the-air updates could be optionally downloaded, according to @ChronicWire, these updates could possibly be forced on users by Apple, too. The news came in a tweet (made from the @ChronicWire Twitter account), which hit the Web several days ago:

Some parts of iOS 5 seem to hint that forced OTA updates are possible, although it is unclear whether Apple will end up using this.

However, nothing has yet been confirmed by Apple. We'll keep you posted. In the meantime, let us know how you would feel if Apple launched "forced" over-the-air software updates in the comments. [via RazorianFly] 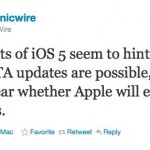 Unconfirmed: "Forced" Over-The-Air Software Updates Could Launch In iOS 5
Nothing found :(
Try something else