You are using an outdated browser. Please upgrade your browser to improve your experience.
by Joe White
July 28, 2011
As originally noted by TechCrunch, Qualcomm has released its Augmented Reality Software Development Kit (SDK) for iOS. The SDK allows iOS developers to create impressive augmented reality applications, and is available to download now over at Qualcomm's website. A couple of months ago, we told you Qualcomm was planning on bringing the SDK to iOS. Already, it is available for Android developers, and a great many popular applications have been created using the software development kit. Among them are Inch High Stunt Guy, an Android app that allows users to control a bike-riding stuntman as he cruises across a tabletop, bookcase or any other nearby area you can point a camera at. The technology is impressive, and we're looking forward to seeing Qualcomm AR SDK apps hit our own iOS App Store soon. In the meantime, take a look at the below video, which outlines Inch High Stunt Guy, and let us know your thoughts in the comments. The Qualcomm Augmented Reality SDK is available to download now, and supports the iPhone 4, iPad 2 and fourth generation iPod touch. 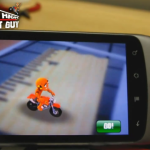