You are using an outdated browser. Please upgrade your browser to improve your experience.
by Joe White
July 22, 2011
A new report claims that Verizon is in the process of clearing out iPhone 4 inventory. Obviously, this suggests that the launch of a fifth generation handset is not far away. The news comes from Phone Arena, who cites information provided by a "trustworthy tipster." The source claims that Verizon has started "discounting certain accessory bundles for the iPhone 4," which would suggest that the fourth generation handset is soon to be replaced with a newer model. Do remember that we hear iPhone 5 rumors day in, day out, and as a result it's important that we take them all with a pinch of salt (until something is confirmed by Apple). However, Phone Arena has a decent track record with this kind of thing, leading us to believe that there might be something behind this report. If Verizon is indeed phasing out iPhone 4 accessories, it does suggest another handset is coming soon (as mentioned). Furthermore, it would also suggest that the fifth generation handset will be markedly different from its predecessor, which contrasts with various rumors we've reported on in the recent past. Remember, many have claimed that Apple's iPhone 5 is going to be "basically a better iPhone 4," while others suggest that the design of the fifth generation handset is going to be completely different to anything we've already seen. It could be that discounted iPhone 4 accessories means the iPhone 5 will feature a slight or major redesign, and will be unlike the iPhone 3GS (accessories designed for the iPhone 3G were compatible with the iPhone 3GS). At the very least, this might lead us to believe that Apple is not planning on releasing an "iPhone 4S" later this year (something I think is highly unlikely, considering Apple unofficially postponed the release of the handset). The most recent speculation is that Apple will announce its fifth generation iPhone handset around August or September. Personally, I'm expecting a redesigned handset. While it's not sensible for Apple to radically alter the design of the iPhone handset year in, year out, I don't really see Apple releasing an iPhone 4S in September, especially considering that the handset is launching in fall as opposed to summer. But do remember, until the announcement comes out of Cupertino, CA, nobody is going to know for sure. We'll keep you posted, and feel free to share your thoughts in the comments. 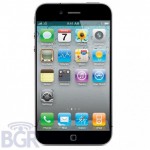 Verizon Clearing Out iPhone 4 Accessories Ahead Of Fifth Generation Handset?

Verizon Clearing Out iPhone 4 Accessories Ahead Of Fifth Generation Handset?
Nothing found :(
Try something else