You are using an outdated browser. Please upgrade your browser to improve your experience.
by Joe White
August 4, 2011
One of the downsides to Safari for iOS is that the built-in, Apple-developed application doesn't allow users to upload content from an iPhone to a website. Fortunately, a new jailbreak tweak called "Safari Upload Enabler" allows users to upload content from within Safari itself. The tweak can be downloaded in Cydia for $1.99. It's already possible to upload content from within iOS applications (like pictures and videos). However, in Safari for iOS it's not possible to upload files to a website featuring a big old "Upload" button. This is because Apple has blocked the ability to do this in the built-in Safari app. However, Safari Upload Enabler removes this block. Once installed, users can upload content to the Web from within Safari, via a new pop-up window. As noted by iDownloadBlog, this will only work provided users have loaded the desktop version of a website (the mobile Web version won't work). Furthermore, the tweak isn't compatible with iOS 4.1 and below. As mentioned, Safari Upload Enabler can be downloaded in Cydia for $1.99. Take a look at the tweak, and if you're interested in downloading files via Safari instead, check out Safari Download Manager. 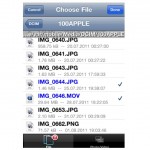 Jailbreak Only: Safari Upload Enabler - Upload Files From Within Mobile Safari
Nothing found :(
Try something else