You are using an outdated browser. Please upgrade your browser to improve your experience.
by Joe White
September 22, 2011
According to a recent survey, 89 percent of iPhone owners will stick with Apple when it comes to purchasing their next smart phone handset. This figure placed Apple ahead of every other manufacturer in terms of smart phone retention rate, with HTC's 39 percent earning the company the position of second place. It was bad news for Research In Motion, who saw a significant decrease in retention rate (from 62 percent to 33 percent). Samsung earned 28 percent, while Motorola snagged 25 percent. But does this mean smart phone users prefer iOS to Android? Not quite - in terms of software, Android holds a retention rate of 55 percent, which isn't too bad. However, as noted by Apple Insider, 31 percent of Android users stated that their next smart phone would be an iPhone. In the coming months, Apple will likely release two iPhones - the iPhone 4S and the iPhone 5. If these figures are anything to go by, a lot of previous iPhone owners will be upgrading to the newer model (myself included), while Apple will also manage to capture ex-users of Android, BlackBerry OS and more. We'll keep you posted. 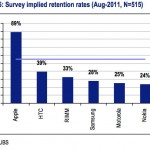 A Massive 89 Percent Of iPhone Owners Will Stick With Apple, Survey Claims

A Massive 89 Percent Of iPhone Owners Will Stick With Apple, Survey Claims
Nothing found :(
Try something else