You are using an outdated browser. Please upgrade your browser to improve your experience.
by Alexander Vaughn
September 26, 2011
Remember the amazing secret Facebook app for the iPad we told you about, and showed you this summer? Well, you might never see it. Indeed, as just reported by BusinessInsider, the lead engineer behind the app announced, on his personal blog, that he has left Facebook for Google. The reason behind his departure is apparently his growing frustration with Facebook for not releasing the app, which he spent days and nights working on. Apparently, it's been ready for months:

Verkoeyen writes on his blog that he was the lead engineer on the Facebook iPad app back in January. He put a ton of time into the app, sometimes working 80 hour weeks. It was feature-complete back in May, he writes, but Facebook kept pushing its release out another two weeks, then another. Now, he thinks it may never be released.

Unfortunately, it seems like Verkoeyen already updated his post, removing the interesting details about the Facebook iPad app. Most likely, he's trying to avoid trouble, but it's probably too late for that anyway. It also makes us suspect that the app leak was intentional. Of course, the big question here is what are Facebook's motives? We assumed the app wasn't ready, or that they were waiting to announce it. Unfortunately, that doesn't seem to be the case. The two most likely explanations right now are that, one: Facebook is holding the app hostage due to their bad relationship with Apple (as a reminder, Apple is featuring Twitter in iOS 5, not Facebook, and had many problems with Facebook in the past, especially over Ping). Two: Facebook is waiting to develop its new HTML5 app platform before they release it. Techcrunch seems to like the first explanation, and says this is just a new episode in the Apple-Facebook conflict. Yet, later in their article, they claim Apple is working with Facebook on this, so they clearly don't have much of the story either. This is an interesting situation, as Facebook is incredibly popular, and Apple would certainly profit by having their iPad app on its platform. Especially if you consider that the iPhone Facebook app is one of the most popular apps available. On the other hand, the iPad is the only real tablet out there, and Facebook would certainly delight a lot of users by releasing the app. After all, everybody is waiting for it. We don't mind the Titans fighting, but please Facebook, don't hold your iPad app hostage over this. It's ridiculous. You can't argue with Apple. 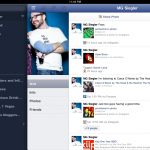