You are using an outdated browser. Please upgrade your browser to improve your experience.
by Joe White
September 22, 2011
The popular jailbreak application "MyWi" has recently received an update, which adds iOS 5 support and performance improvements. The app, which allowed users to create Wi-Fi hotspots via their iPhone long before iOS 4.3 did, is currently available to purchase in the Cydia Store for $19.99. As outlined in the app's release notes:

This is great news for users of the application, as it means MyWi will already be compatible with iOS 5 once the mobile operating system is released to the general public. Currently, iOS 5 is still in its beta phase of development, though a Gold Master version is expected to be released in the coming weeks. If you already own version 4.x of MyWi, this update can be downloaded for free. However, if you're running 3.x it will cost $9.99. And for new customers, the application costs $19.99. Furthermore, it is worth noting that AT&T is cracking down on unauthorized tethering, so be warned. Take a look at the latest version of MyWi now, and feel free to share your thoughts in the comments. [via iDB] 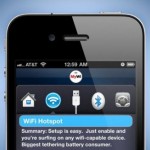 Jailbreak Only: MyWi Gets An Update - Now Supports iOS 5

Jailbreak Only: MyWi Gets An Update - Now Supports iOS 5
Nothing found :(
Try something else