You are using an outdated browser. Please upgrade your browser to improve your experience.
by Bryan M. Wolfe
October 10, 2011
We’ve been playing around with the new Facebook for iPad app for a few hours now and overall, we’ve been impressed with its features and simplicity. Consider this a very early first look. Released earlier today, Facebook’s long gestating iPad app brings the social networking giant officially to Apple’s tablet for the first time. And yes, it looks a lot like the leaked Facebook for iPad version from earlier this year. But, because it is now a complete product, it is quite a bit better. Right off the bat, we were impressed with the app’s use of gestures, which were missing from the leaked version. You can swipe to open the left sidebar (where you’ll find Search, Favorites, Apps and Pages), as well to move back to previous screens. We also were impressed with the app’s use of popovers. These offer quick glances at what’s new within your Facebook account. Most significantly, Facebook for iPad includes an app discovery feature. As Macstories explains it:

The Facebook app now allows users to tap on links shared on the News Feed by specific apps, like Words with Friends, and if the app is already installed on the device and recognized by Facebook, it’ll launch it. If the app isn’t installed but available on the App Store, Facebook will forward the link to the App Store; if no App Store version is available, Facebook will try to load a new HTML5 version as part of a partnership with several developers to bring Facebook apps to mobile browsers. Previously, many Facebook apps had to be written in Flash to run on Facebook’s website, and this limitation made them incompatible with Apple’s devices and Safari browser, which don’t support Flash.

Other features include: Meanwhile, Facebook has also changed how its iPhone app works as well. The Version 4.0 update includes: Now that Facebook for iPad is finally out, it will be interesting to see what everyone thinks of it. In addition, we'd love to see what changes and/or additions are included in the weeks and months to come. The universal Facebook app is available now in the App Store. 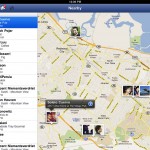 A (Very Early) First Look At The New Facebook For iPad App
Nothing found :(
Try something else