You are using an outdated browser. Please upgrade your browser to improve your experience.
by Alexander Vaughn
October 10, 2011
After months of delays, leaks and many debacles, Facebook has finally gotten their act together and will be releasing the iPad version of the Facebook iOS app to the App Store today. Indeed, while we began to worry that we would never see it, Facebook told The New York Times earlier today that they're finally ready, and provided them with details and screenshots of the app. According to them, it will be made public anytime now, free of charge as an update to the iPhone app. So what's so special about it? Well, it will allow you to enjoy Facebook on your iPad natively. That is, it will make it much easier than before to enjoy the social network on your tablet, browse through photos, videos and chat with friends using gestures. Without a doubt, this is a big upgrade from the experience you might have had using mobile Safari so far. Not to mention, messaging will be much better thanks to push notifications and iOS 5 support. Along with the app, Facebook is bringing its "platform" to mobile to make it easy for developers to make apps and integrate with Facebook. That is, Facebook will finally take advantage of their navigation screen and let developers link their apps within Facebook on mobile through a feature called bookmarks. They will also make it simpler to invite friends to apps and games. For example, a desktop user will now be able to invite you to play Words With Friends against them, and you'll be able to receive the invitation and join from your iPad. . The new universal Facebook app has finally gone live and it's available on the App Store right here. You absolutely need to check it out. Happy? 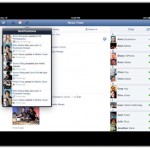 Facebook For iPad To Hit The App Store Anytime Now (Update: It's Here!)

Facebook For iPad To Hit The App Store Anytime Now (Update: It's Here!)
Nothing found :(
Try something else