You are using an outdated browser. Please upgrade your browser to improve your experience.
by Joe White
October 6, 2011
In an interview with Eurogamer, Donald Mustard (of chAIR Entertainment) recently noted that Apple's iPhone 4S boasts 512 megabytes of RAM. According to Eurogamer, Mustard said:

I’m still shocked that, with the iPhone 4S, I’m literally running around with a 1080p video camera in my pocket, with an eight megapixel camera, 64GB of hard drive space and an A5 chip with 512MB of memory. This is a really powerful computer, right?

The iPhone 4S' RAM isn't something Apple made a fuss about at Tuesday's iPhone event, in Cupertino, CA. The handset, which is an improved version of the iPhone 4, includes an Apple A5 dual core processor alongside the aforementioned 512 megabytes of RAM. Interestingly, both the iPhone 4S and the iPad 2 have the same internal specs, meaning that - on paper - the second generation iPad has the power to run Siri, Apple's advanced voice recognition and text-to-speach service (which is launching as an iPhone 4S exclusive). If you ask me, Apple wants to keep Siri an iPhone 4S only feature in order to push more people towards the handset. Let us know if the new service will convince you to upgrade in the comments. [via This is my next] 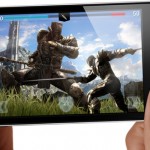 According To chAIR Entertainment, Apple's iPhone 4S Has 512 Megabytes Of RAM

According To chAIR Entertainment, Apple's iPhone 4S Has 512 Megabytes Of RAM
Nothing found :(
Try something else