You are using an outdated browser. Please upgrade your browser to improve your experience.
by Joe White
October 21, 2011
In the beginning, Steve Jobs didn't like the idea of third-party native iOS apps. It sounds crazy, but according to Walt Isaacson's upcoming biography of the late Apple co-founder, pieces of which have started coming out late this week, "Jobs at first quashed the discussion" when Apple board member Art Levinson contacted him in an attempt to talk about the potential of mobile apps. According to the Huffington Post, who already has a copy of the biography:

There was one feature that Jobs initially opposed, however, that has since become a cornerstone for the company: apps. Apple board member Art Levinson told Isaacson that he phoned Jobs "half a dozen times to lobby for the potential of the apps," but, according to Isaacson, "Jobs at first quashed the discussion, partly because he felt his team did not have the bandwidth to figure out all the complexities that would be involved in policing third-party app developers."

The biography is already available to preorder through Amazon, iBooks and others, and should reach customers on October 24. It weighs-in at 656 pages, and looks to be a remarkable book. I've preordered my copy - have you? Let us know in the comments. 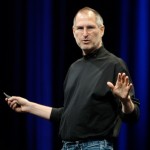 Believe It Or Not, Steve Jobs Initially Didn't Like The Sound Of Third-Party Applications

Believe It Or Not, Steve Jobs Initially Didn't Like The Sound Of Third-Party Applications
Nothing found :(
Try something else