You are using an outdated browser. Please upgrade your browser to improve your experience.
by Joe White
October 7, 2011
It took a while, but preorders for Apple's recently announced iPhone 4S handset are now live. You can grab the new smart phone over at the Apple Online Store, where it retails for $199 (16 gigabytes), $299 (32 gigabytes) or $399 (64 gigabytes), and is available with AT&T, Verizon or Sprint. Furthermore, Apple Online Stores around the world (well, in Canada, Australia, the UK, France, Germany and Japan) are now also full to the brim with shiny, new iPhone 4S handsets just waiting to be preordered. In Apple Retail Stores, the iPhone 4S goes on sale one week today (that's October 14). This is the date preordered handsets from the Apple Online Store are expected to reach Apple fans. If you're wondering whether the iPhone 4S is for you, we've got a great article which tackles that very question. Take a look at it, and let us know if you're going to preorder the handset in the comments. Update If you haven't already heard, unlocked iPhone 4S handsets aren't going to be available in the United States until November. Read our article for more information. 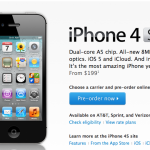 Go Get It! - Preorders For Apple's iPhone 4S Now Live [Updated]
Nothing found :(
Try something else