You are using an outdated browser. Please upgrade your browser to improve your experience.
by Joe White
October 23, 2011
Earlier today, a new package appeared in Cydia called "SemiTether." Once downloaded, this clever tool allows iOS fans who have applied a tethered jailbreak to their mobile device to reboot it without having to hook-up to a computer, and boot using redsn0w. As the only jailbreak solution currently available for iOS 5 is a tethered solution, a lot of jailbreak fans are going to appreciate "SemiTether." In this article, we're going to explain how you can apply a semi-tethered jailbreak to your iOS device. However, before we start, we're going to explain a few things. First, this isn't an untethered jailbreak solution. Even if you reboot your iPhone using the SemiTether method, some iOS apps (such as Safari and Mail), along with all of your jailbreak apps (Cydia et. al.) will not work. Importantly, the built-in Phone and Messages apps will work though, meaning users will still be able to use their iPhone to make calls and send texts. Second, if you're not desperate to jailbreak your iOS device, do be aware that an untethered solution is currently being developed and should be released soon. With an "untethered solution," users can reboot their iPhone as much as they like, and it won't make a difference to the handset's functionality. However, if you do need to jailbreak your iOS device, this semi-tethered method is currently the best solution available. Third, it's not possible to jailbreak iOS 5 on an iPhone 4S or iPad 2, so if you're rocking the latest generations of Apple's smart phone and tablet, you're going to have to wait. Alright, with that in mind, here's how you can apply a semi-tethered jailbreak solution to your iOS device. One - jailbreak your iOS device In order to apply the semi-tethered jailbreak, you're first going to have to apply a tethered jailbreak to your iPhone, iPad or iPod touch. As mentioned, it's already possible to apply such a jailbreak to iOS 5 devices (excluding the iPhone 4S and iPad 2), and fortunately we have a detailed how-to guide that explains the process. Take a look at our how-to guide, and once your iOS device is jailbroken, proceed to step two. Two - install "SemiTether" from Cydia Once your iOS device is jailbroken and you've got Cydia up and running, add the following source: "http://thebigboss.org/semitether." You can do this by heading over to the "Manage" tab, and then selecting "Sources." Next, search for "SemiTether" in Cydia and download the free package. Now, you'll be able to reboot your iPhone without having to connect it to a computer and booting it using redsn0w. However, not every app works. Following the "SemiTether" reboot, jailbreak applications won't be working (such as Cydia, and any tweaks you've installed). Furthermore, the built-in Safari and Mail apps won't work either. However, the good news is that both the Phone and Messages apps will work, meaning you'll be able to make calls and send SMS messages from your jailbroken iPhone handset following the "SemiTether" reboot. Three - boot from redsn0w If you do reboot your iPhone via the above method, you'll need to boot tethered using redns0w at your earliest convenience in order to regain jailbreak functionality, and get the Safari and Mail apps working properly again. As outlined in our iOS 5 jailbreak guide:

Connect your iPhone, iPad or iPod touch to your computer, turn it off and launch redsn0w. Like before, navigate over to the “Extras” section of the app, select the appropriate IPSW file and wait for redsn0w to process it. Now, in the “Extras” menu, select “Just boot.” You’ll be asked to put your iOS device into DFU mode like before, only this time redsn0w will boot-up your mobile device instead of jailbreaking it. The boot process will restore jailbreak functionality (unless you do this, you’ll be unable to use Cydia on your jailbroken iOS device), and shouldn’t take long.

Four - you're done! That's all there is to it. Once "SemiTether" has been downloaded and installed, you'll be able to reboot your iPhone without having to connect it to a computer, and both the Phone and Messages apps will work. If your iPhone runs out of juice while you're on the road, or if you leave your laptop at home and your handset powers down at work, "SemiTether" will have you covered. However, as mentioned, booting tethered is still required in order to get your jailbroken iPhone working properly again. If you have any questions, feel free to post them in the comments. Good luck, and as always, proceed with caution! 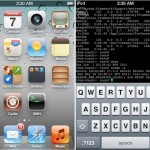 Here's How You Can Apply A Semi-Tethered Jailbreak To Your iOS Device
Nothing found :(
Try something else