You are using an outdated browser. Please upgrade your browser to improve your experience.
by Joe White
September 17, 2011
Two members of the Chronic Dev Team (@p0sixninja and @iOPK) have given a talk at today's MyGreatFest jailbreak conference. As you'll find out, they're not only expanding, but have already found many exploits in iOS 5 which should allow for an upcoming jailbreak. Joshua Hill began his talk by outlining how the Chronic Dev Team got to where they are, and recounted the stories we've been reporting on for the past few years, since the iPhone was first jailbroken. Joshua gave a nod of the head to @comex, who was able to jailbreak several versions of the iPhone using JailbreakMe. Interestingly, @comex has now been hired by Apple. Where is the Chronic Dev Team now? Joshua Hill notes that the Chronic Dev Team will strive to release an iPhone 5 jailbreak solution, once the handset has been released. The new greenpois0n is going to be a "userland jailbreak," and takes advantage of five different exploits (this is a record breaking number of exploits!). However, there's obviously a series issue: Funding. Joshua Hill notes, "imagine if the next comex comes up, and we can train him and turn him into a hacking machine?" The Chronic Dev Team is looking for funding, but it's also making process. Today, they are introducing Chronic Dev Team, LLC. The team is looking for new, "talented people" to come on board, and help the Chronic Dev Team continue to jailbreak future iOS devices. "It's been an amazing, amazing time," Joshua said. And with new team members, it's only going to get better. From the Q&A:

The team is as ready as it can be for the iPhone 5 jailbreak, without having the actual handset. Once the iPhone 5 is available, the Chronic Dev Team will be working hard to find a jailbreak solution, and release it to the public.

The iOS 5 Jailbreak The most exciting news of the day is probably the Chronic Dev Team's announcement that they have already found five new exploits to allow them to jailbreak iOS 5, on the iPhone 4, iPad 2 and hopefully the iPhone 5 once it's officially released by Apple. These are only software exploits, so Apple might be able to fix them in the future, but they should work on the iPhone 5. All in all, this is a record number of exploits found in an upcoming OS so we should feel confident they'll manage to make it work. For more details on today's conference, check out our roundup!   [gallery link="file" columns="5"] 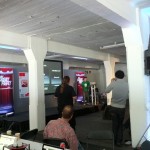 MyGreatFest - The Chronic Dev Talks iOS 5 Jailbreak & Plans For The Future
Nothing found :(
Try something else