You are using an outdated browser. Please upgrade your browser to improve your experience.
by Joe White
October 22, 2011
Over the past few days, extracts from Walter Isaacson's upcoming biography of Steve Jobs have been hitting the Web hard and fast. Now, The New York Times has published the first review of the book, titled "Steve Jobs." Unsurprisingly, the publication has noted that the 656 page "well-ordered, if not streamlined" text is definitely worth reading. The review shares extracts from the biography, which discusses Steve Jobs' childhood, the birth of Apple and his ascent into tech-stardom:

After Steve Jobs anointed Walter Isaacson as his authorized biographer in 2009, he took Mr. Isaacson to see the Mountain View, Calif., house in which he had lived as a boy. He pointed out its “clean design” and “awesome little features.” He praised the developer, Joseph Eichler, who built more than 11,000 homes in California subdivisions, for making an affordable product on a mass-market scale. And he showed Mr. Isaacson the stockade fence built 50 years earlier by his father, Paul Jobs. “He loved doing things right,” Mr. Jobs said. “He even cared about the look of the parts you couldn’t see.”

But, as noted in our earlier article on the biography, Isaacson does paint a very real portrait of the Apple co-founder:

“His Zen awareness was not accompanied by an excess of calm, peace of mind or interpersonal mellowness,” Mr. Isaacson says. “He could stun an unsuspecting victim with an emotional towel-snap, perfectly aimed,” he also writes. But Mr. Jobs valued simplicity, utility and beauty in ways that would shape his creative imagination. And the book maintains that those goals would not have been achievable in the great parade of Apple creations without that mean streak.

The text "greatly admires its subject," according to the review. Though it's made all the more poignant by the recent death of Steve Jobs:

Mr. Jobs got the last laugh every time. “Steve Jobs” makes it all the sadder that his last laugh is over.

Remember, you can preorder the book through Amazon, iBooks and others. Take a look at the review, and let us know if you've preordered the biography in the comments. [via The New York Times] 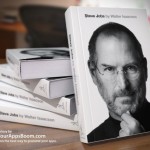 Steve Jobs' Biography Gets Its First Review
Nothing found :(
Try something else