You are using an outdated browser. Please upgrade your browser to improve your experience.
by A.T. Faust III
January 18, 2012
Mike Elgan of Cult of Mac has published an interesting and insightful bit of speculation about the future of Apple as a primarily content-oriented company, and the lengthy read is well worth your time and attention -- especially as it pertains to Apple's anticipated "publishing" event tomorrow. While Elgan shares a multitude of viewpoints on Apple's media-rich progression, his emphasis on the written word and that industry's imminent change is most appropriate in the short term of the Cupertino company's 2012 game plan. Our long-held assertion that Amazon would become Apple's primary competitor going forward seems to be holding up, and -- with the release of the Kindle Fire (questionable sales or not) -- it's time for Tim Cook and company to draw a (darker) line in the sand. Says Elgan:

Apple will never compete with Amazon.com in a soup-to-nuts online bookstore scenario, where the core competency is making deals with every book publisher in existence and managing incredible inventories of paper books. That’s not a business Apple wants to be in. But the future of books — self-published authors selling electronic books to be read on digital devices. Well, that’s an Apple business. In other words, Apple won’t compete with Amazon for the present of book publishing, but for the future. And Apple has one massive advantage over Amazon.com in the world of self-publishing: A disproportionate percentage of authors use Macs. All things being equal, authors would choose to work with Apple rather than Amazon. And they’re not equal: Apple is already better than Amazon at creating the tools for creating books. Apple is already the hardware platform of choice for both designers and authors. Apple makes word-processing software and communications software. In fact, every aspect of the disintermediated book publishing model falls squarely into Apple’s core competencies. I think Apple intends to slowly take control of the book publishing industry from Amazon by providing the leading tools and cloud infrastructure for authors to create and then market their books directly to readers.

In short, Apple's going to announce Thursday the seeds of its secret plan to eliminate traditional publishers from the world of publishing itself. And, if Elgan's correct, the company intends to do so first with textbooks. Why?

Starting with textbooks makes enormous sense for Apple. The company has always emphasized the education market. Schools at all levels have taken to iPads in a massive way. Re-inventing textbooks to be read on iPads will be something welcome by students, teachers, school districts and universities.

That's certainly a logical approach, but Elgan continues along a line of reasoning with which I'm not in particular agreement -- He is predicting the existence and actual introduction of the oft-rumored 7-inch iPad:

As part of Apple’s effort both to serve the education market and also to clobber Amazon.com, I think Apple will announce sometime this year, possibly Thursday, a 7-inch iPad (widely rumored) and sell it at very low cost to undermine the attractiveness of the Amazon Kindle Fire.

If textbooks are indeed going to be Apple's initial focus for their so-called "publishing revolution," a smaller iPad makes little sense. Amazon's own solution for that space, the poorly-selling Kindle DX, sports a 9.7-inch display, just like the iPad. But said poor sales aren't due to the size of the DX's screen, but rather its wonky PDF rendering, general e-ink sluggishness, and its outright inability to support quick, touch-based navigation and annotation. All these qualities, inherently rectified in the very form and function of Apple's iPad, slowed scholastic and academic adoption of the DX to a crawl. Although 7-inch tablets and e-readers make sense for casual reading, they're just too small for effective scholarly perusal, where images, graphs, charts, margins, and other such layout paradigms make up the typical textbook's presentation. The iPad's size is not an issue. (And, as more and more college-bound students purchase iPads in lieu of actual laptops, cost shouldn't be much of a factor, either.) So, what will Apple actually announce tomorrow? All we know is it'll have to do with books, publishing, and "education," and it'll be important. But there's probably no "iPad mini." [Image: zuneblaster.com] 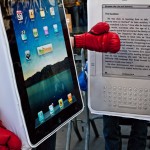 Apple Hopes To Deliver Crippling Blow To Kindle Fire At Tomorrow's Event
Nothing found :(
Try something else