You are using an outdated browser. Please upgrade your browser to improve your experience.
by Jamie Young
January 9, 2012
There has been a lot of talk about iOS gaming controllers lately, specifically the 60beat GamePad. We recently learned a bit more about this controller, specifically how it works. But now there’s a new controller in town. Meet the Gametel gamepad. This wireless gaming device was once only for Android users, but it's now made for iOS devices, as well. It connects using Bluetooth and has a D-pad, four buttons, and two shoulder triggers — almost replicating a perfect gaming controller. But what about playing dual stick games? Unfortunately, it doesn’t seem to be able to do this. The best part about the Gametel gamepad, though, is that it supports more games than the 60beat. This includes hundreds of iCade titles as well as other games. However, please take note that this gamepad only works on an iPhone running iOS 4.0 or later or an iPad running iOS 3.2 or later. The Gametel gamepad will be showcased at the Consumer Electronics Show this upcoming week. But if you won’t be there to play with it, you can check it out or purchase it here. (via Cult of Mac) 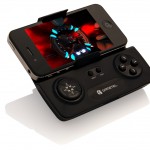 Gametel Wireless Gamepad Is Here: Now For iOS Devices
Nothing found :(
Try something else