You are using an outdated browser. Please upgrade your browser to improve your experience.
by Joe White
January 26, 2012
If you've been looking for an ultimate, all-in-one Siri-enhancing jailbreak tweak for your iPhone 4S handset, look no further. A new package to recently appear in the Cydia Store - called AssistantExtensions - transforms Siri from a humble personal assistant, into mighty, powerful digital butler ready to undertake almost any potential task. Granted, if you're living outside of the U.S. (like me), after installing AssistantExtensions you still won't be able to search for local businesses using Siri. But you will, on the other hand, be able to do a lot more with your virtual iOS-powered companion. First up, AssistantExtensions makes it possible to launch built-in and third-party iOS applications. Though this feature did launch with SiriToggles a few days back, it's built into AssistantExtensions too - the app launch feature even works with our very own AppAdvice application, which SiriToggles appeared to struggle with. Second, AssistantExtensions allows users to search YouTube:

A list of videos are displayed within the Siri UI, and touching a video will take you over to the built-in YouTube app.

Third, and perhaps the most highly anticipated feature of AssistantExtensions, is support for Twitter: simply speak "tweet [plus your Twitter update]," and the jailbreak tweak will use iOS 5's Twitter integration to compose the tweet (as you can see in the lead image).

Currently, AssistantExtensions is available to download for free over in the Cydia Store (via the BigBoss Repository). If you've already downloaded SiriToggles or Sireet, or some other tweak that offers one or more of the above features, we'd recommend you uninstall them all before downloading and installing AssistantExtensions, just to be sure there are no conflicts.

Remember, you can jailbreak both your iPhone 4S and iPad 2 (under iOS 5.0.1) using the Chronic Dev Team's Absinthe jailbreak tool. 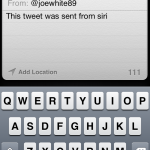 Jailbreak Only: AssistantExtensions - The Ultimate Jailbreak Tweak For Siri

Jailbreak Only: AssistantExtensions - The Ultimate Jailbreak Tweak For Siri
Nothing found :(
Try something else